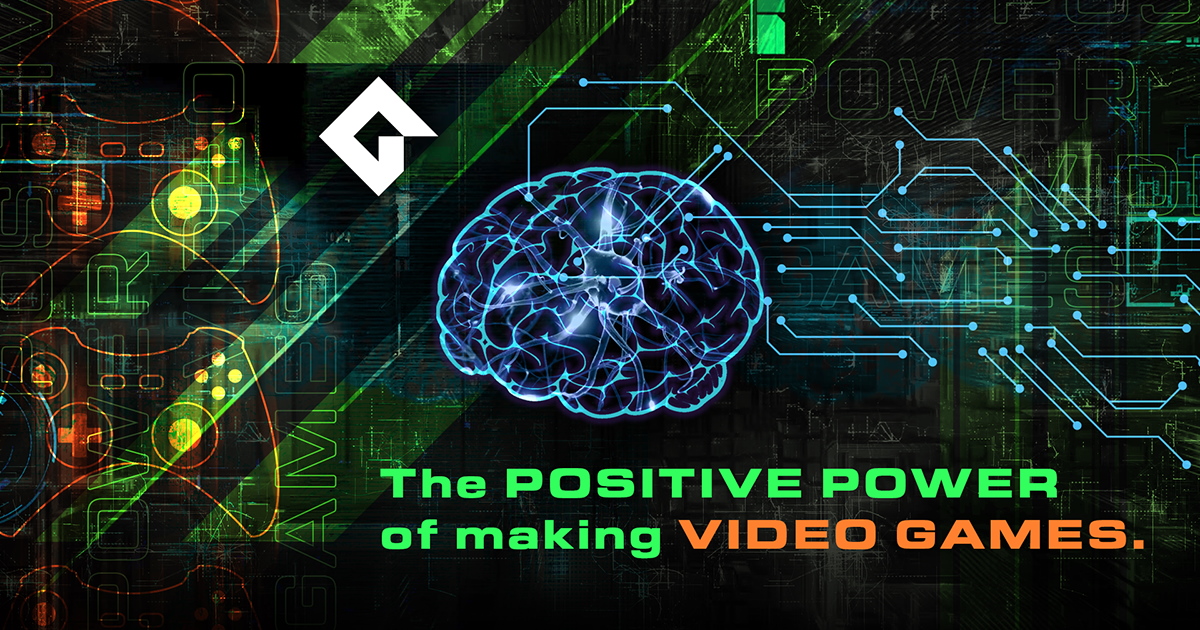 Playing video games unlocks a host of well-documented side benefits, including improved brain function, better moods and lower anxiety levels. But less well known are the myriad of mental health and wellbeing benefits that can be derived when making video games.

On a neurological level, playing games relies on the Cerebrum to help process the constant stream of information coming from the eyes. As a result, studies have found that gamers typically have superior everyday eyesight compared with non-gamers, while younger gamers often experience improved reading skills and literacy.

However, making video games is a creative activity and therefore uses a completely different part of the brain – the Frontal cortex. When you make a game, you’re pulling together a host of different disciplines like design, logic and planning. Because of this, game creators find themselves completely absorbed and engaged in the task at hand – a ‘flow’ state that is proven to reduce anxiety, boost mood and even slow your heart rate.

But there’s another reason why people enjoy making games. When we achieve a result or success by solving a problem or achieving a cool effect, such as working out how to make a character move in a specific way or direction, it triggers the release of the brain’s feel-good chemical dopamine. The brain clearly likes getting a dopamine hit, which in turn helps the creator to stay focused on the task in hand.

The reasons why making games makes you feel good is certainly evident when you speak to people about why they enjoy making games. “For me, building a game is very satisfying as I like the aspect of building something for others to play and enjoy” explains XanthorXIII, adding: “I also like to solve the problems that are associated with building the game and I derive a sense of accomplishment from solving those problems.”

Creating your own video game, like writing a song or painting a picture, is a very personal thing. As a result, game makers often have a positive emotional connection with the creations, in a way that’s just not always possible from playing someone else’s game. This connection, or ‘feeling’ is one the reasons software engineer and game developer Olaf Minkowicz loves making games, ”There are plenty of pros to me working on and getting better at making video games, learning design patterns, data structures and algorithms, and even just understanding the architecture and how to structure your game. But at the end of the day I do it because I want to feel something and I hope others can play it and feel the same thing.”

That emotional connection and feeling is also the reason why Bryce Holland decided to come back to making games after many years, “Making games made me feel creatively empowered,” he reminisced. “As I progressed into my adulthood, I realised that I truly missed that feeling. Every time I start playing a game, I never make it more than an hour or two in, because I realise I’d rather spend my time making games instead.”

Aside from the personal health and wellbeing benefits that can be derived from making games, many game makers find it helps them to form positive connections with those around them.

Because making games draws on so many different disciplines, from art to problemsolving, starting your own project can be a great way to bring together people with different skills. For example, Sam (@MashArcade) works in an office by day, but in his spare time he loves to make games. He has discovered that making games is a great way of connecting his children’s various interests with his own. His daughter, 6, loves painting and drawing, while his son,10, is an avid gamer. Sam does all the normal things with you’d expect with his children, but he’s not ashamed to admit that it’s when making games together that their passions all truly connect: ”While I love going to the park, playing hide and seek, and running through sprinklers, I am not passionate about any of these things myself. I love making games, and it’s the one true thing where me and my children can do something we truly love," he says. “I’ll do the game design, she’ll help make the art, and he’ll help with vigorous playtesting. After we get everything to a playable state, we’ll stream our game to the big TV in the living room, grab a couple of controllers, and play our creations.” going on to say: “I’ll watch their faces light up when they play. They’ll squeal and laugh and giggle. They don’t have the same reaction to the AAA titles on the consoles, for this game was signed with love: Their love. Their hard work and passion went into getting every pixel just right.”

But Sam’s story of connecting with others through game making is not unique. With a background in painting and photography, Iris (@MeltingParrot) became disillusioned when a lack of success left her life lacking direction. Her partner suggested that they try making a game and soon she realised she’d discovered “the perfect medium to express my creativity”.

Now a husband and wife development team, Iris and her partner are aiming to be more than just hobbyist makers, by creating a game that they ultimately hope to commercially release. Iris admits that making games have given life real purpose, “what keeps us coming back to it is the euphoria of achieving what we envision and the purpose it gives us to create.”

Making games is becoming an increasingly popular hobby and those who choose to invest their spare time into making games, often find it to be engaging, absorbing and wholly satisfying. This is because making games taps into so many different areas, in ways that few other past times can.

It’s about doing something that makes you feel good. As games journalist and hobbyist game maker Stefano Zocchi says, “Even if you don’t plan to make money from the results, creating things gives you a sense of control that your life might otherwise lack.”