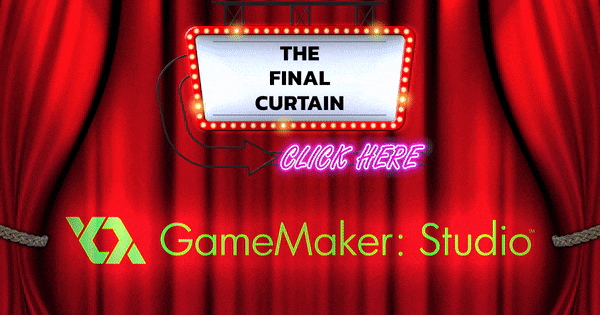 We recently said farewell to GameMaker: Studio 1.4 as we wound down our support. However, we promised one final update, and we're happy to say GameMaker: Studio version 1.4.9999 has been released to the Beta channel!

There is a lot in this final update including a few things that we would like to highlight:

You can read all the details in full via the Release Notes.

Whilst 1.4.9999 is in the Beta channel, we'll review your feedback on this GMC thread and review whether further fixes are required before the release is moved to the Stable branch. Please be aware that as support has ended for 1.x, we'll only fix critical or major issues while in Beta (e.g. a very easy-to-get crash from usage of the IDE).

If you do have a major new issue, please let us know via that GMC thread, rather than sending a Helpdesk ticket or any other contact form, so we can keep everything in one place.

A massive thank you from all of us for using GameMaker: Studio 1!

If you’re ready to start making your own 2D games with GameMaker, but you’re not sure which version is right for you, here’s a quick rundown.

What is GameMaker: Studio 1.4?

We originally released GameMaker: Studio 1.4 in 2014, and continued to release updates until August 2018.

Version 1.4 is a stable release that no longer receives updates from the GameMaker team. It was also included in two Humble Bundles in 2016 and 2017, which is part of the reason it remains as popular as it does today.

What is GameMaker Studio 2?

GameMaker Studio 2 is the most recent version of the GameMaker game engine - we just don’t call it “Studio 2” anymore.

In 2022, we dropped the “Studio 2” from the name to make things a little easier. So, if you hear anyone talking about GameMaker Studio 2, they really mean the latest version of GameMaker.

The best and newest version of our game engine is only available on our download page. If you’ve already got GameMaker, you can download the latest updates as they release through the IDE.

GameMaker is completely free to download, with three additional tiers - Creator, Indie, and Enterprise - available to purchase for those looking to export their games to Windows, Mac, HTML5, PlayStation 4/5, Xbox Series X|S, and Nintendo Switch.

We recommend you download the latest version of GameMaker if you’re looking to make your own 2D game.

We’re constantly releasing updates and improvements to GameMaker that simplify game development and improve the IDE, but GameMaker: Studio 1.4 doesn’t receive these updates.

GameMaker 1.4 can only be downloaded from third-party websites that are not affiliated with us, or via the GameMaker accounts page.

If you like the reliability of mastering one version of GameMaker without worrying about updates to the IDE, we’ll be introducing Long Term Stable (LTS) builds of GameMaker in August 2022.