The Tricky Relationship Between Wishlists and Sales 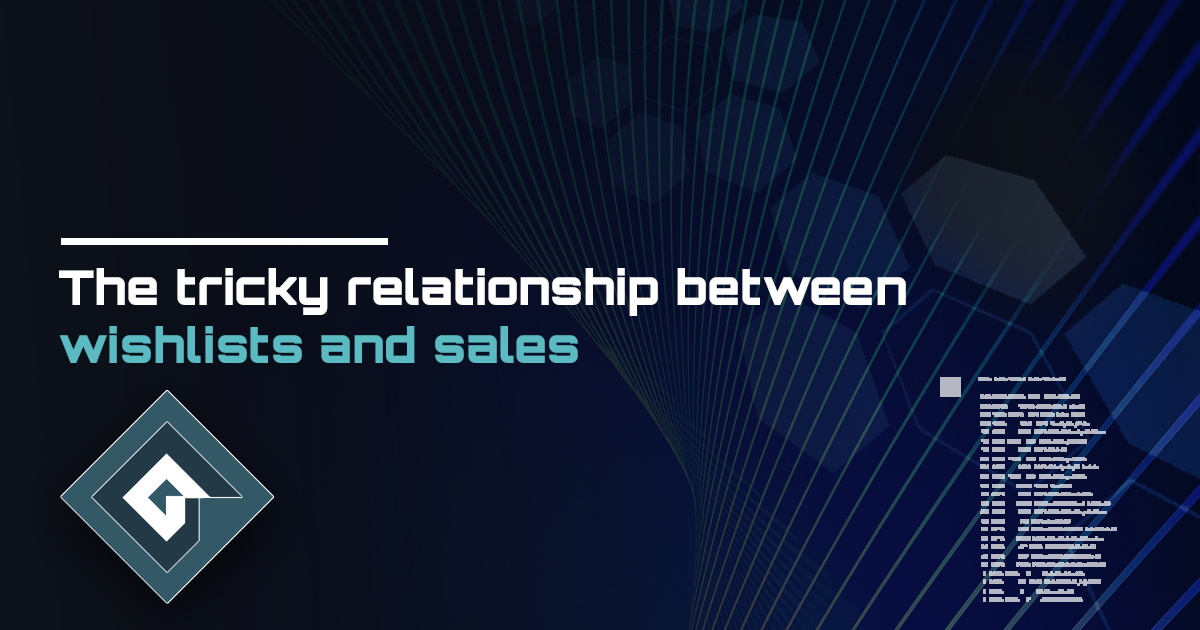 We recently spoke to a few GameMaker Studio 2 developers about the art and science of wishlisting and how wishlists on big stores like Steam can have a huge impact on sales.

Launching a game is an inherently nerve-wracking ordeal. Developers tend to spend at least a couple of years making a game, then they're released into the wild and there's no telling whether they'll sink. That uncertainty is a major hurdle for developers, both emotionally and financially, but there is one thing that developers can rely on to help navigate these unpredictable waters: Steam wishlists.

Indeed, there does seem to be a correlation between wishlists and overall sales, which makes it a very, very important tool for developers. We at YoYo Games decided to talk to several developers from the GameMaker Studio 2 community about their experiences with Steam wishlists; how they grew over time, how well they predict sales, and what drives players to add a game.

Everyone we spoke to agreed that by far the most important aspect of growing a Steam wishlist is visibility, and getting people onto a game's Steam page in the first place. Reading a news story or watching a trailer may pique a person's interest, but unless they're actually on the Steam page, they're unlikely to add it to a wishlist.

"Discoverability is the number one driver of adding a game to a wishlist -- without that, nothing else matters," said Seth Coster of Butterscotch Shenanigans, developer of Levelhead. "If you have a great trailer, a good price and a great game, it simply doesn't matter if people aren't landing on your store page."

"Discoverability is probably the most important but also the one you have the least direct control of," added Spooky Squid Games' Miguel Sternberg, developer of They Bleed Pixels and Russian Subway Dogs. "I think the most important things you can do is have a strong initial Steam page with a great trailer, and then make sure you publish that store page as soon as possible, so you have a long runway to build up those numbers before launch. Those two things are a bit at odds so it's a tricky balance to strike.

"One thing to take into consideration is that the game's actual gameplay will have less of an impact than how it looks and the idea of what the gameplay will be like. Unless you have a free playable demo before launch, most players will be looking at a trailer and maybe reading your copy before deciding to hit wishlist. So the game needs to look fun, and have a good short pitch that sounds like something people think they want to play."

"The moment you release info about your next game, you should absolutely, 100% have a Steam page ready to go. There is no excuse not to, and it's just plain bad strategy to miss out on those potential wishlists," said David Galindo of Vertigo Gaming, developer of the Cook, Serve, Delicious! series. "I still see major indie devs announce games with a 'Steam store page coming soon!' quote, and it's like 'Why on Earth are you announcing your game now if that page isn't ready to go?' Don't do it."

One piece of advice Galindo added was to have a solid release window: "I think if you have a clear description of your game, a good short video, and at least a hazy release date target, you can get some wishlist traffic for sure. Especially the release date target -- very few devs can get away with the 'it's ready when it's ready' line, and you should assume you can't get away with it. Have a release date, even if you're only 5% sure you can make it, because you can easily delay it and having a date makes the game seem much more real."

One reason Steam wishlists are so beneficial is that they remind potential customers via email each time a game is on sale. Getting fans to follow a specific developer's Steam page is likewise important, as that will ensure that they get an email each time the developer launches a page for a new product. As such, stressing that fans follow your developer Steam page is a great way to kickstart your wishlist adds for future titles.

Everyone can agree that having a solid Steam page and getting it live early is a major boon in fleshing out your wishlist prior to launch. But what happens next? How does a wishlist grow or decline over time?

Most found that there's a big uplift in wishlist growth at launch. There are many reasons for this: launch is usually when a game gets the most coverage from media and influencers; a game's price often isn't visible until launch; plus, the Steam store itself prioritizes new releases in its algorithms, though it's worth noting that the way Valve handles visibility for titles is a perpetually shifting current that changes with the times.

"How Steam works is a constantly moving target so there's no guarantee they'll be a good predictor six months or a year from now," said Sternberg. "Word of mouth can also drive this up, though that's a slower, more gradual crawl."

After that, though, it seems like sales are the main periods where wishlists can bloom. "The basic order of events is that first, something will cause people to learn about your game." Coster explained. "Then a small fraction of those people will be both willing and able to buy the game at that moment, at that specific price.

"A slightly larger fraction of people will be interested in the game, but perhaps they're too busy, or they don't want to spend any money right now, or they're currently into some other game. So they don't buy it; they just wishlist it. That second group of people is inherently larger than the first group, so any time your game gains visibility -- through a sale, through featuring, or through some influencer -- your sales pop up, and your wishlists pop up even more. But the key driver of all of this is visibility."

"When you finally launch you generally get your largest bump, since for most games that is when it has peak visibility," Sternberg added. "After that, you get small bumps whenever there is a sale; even though more people are buying the game or deleting it from their wishlists during those sale periods, even more people are discovering the game and adding it to their wishlists.

"If you're lucky enough to end up on the front page during a sale there's a chance you may get even more wishlist additions than at launch -- but that's the exception, not the rule. Eventually, as the game enters the long-tail, your wishlists hit a sort of steady state, where you're adding and losing them at about the same rate."

Sometimes you get lucky and your wishlist continues to build to a rather strong degree. Galindo noted: "It's a bit odd, as we now have more than doubled our wishlist count from when we first launched Cook, Serve, Delicious! 2!!. Usually [the wishlist grows] when there's a large sale."

Not everyone sees their wishlist grow from sales, however. Tom Grochowiak of Solstice and Cinders developer MoaCube noted that it tends to see a decrease because people were converting the game from their wishlist into a sale.

"Publishing the game's store page causes a huge initial spike in wishlists numbers," Groshowiak said. "Same for the few days before the actual launch (doubly so if you get into 'Popular Upcoming'). Afterwards, the growth becomes relatively steady over time, except for discounts and store-wide sales which drop the number through conversions."

It's worth noting that patterns regarding the relationship between wishlists and overall sales only make sense in aggregate, and there's no telling what will happen with any specific title.

"There are endless stories of games that had virtually no wishlists and had abysmal sales at the outset, but then something happened and a big surge of players appeared out of nowhere," said Coster. "So while you could definitely draw correlations between wishlists and sales in the aggregate, it's unlikely that you could reasonably look at a specific game's wishlist numbers and infer anything useful from it."

At the end of the day, everyone can agree that wishlists are very important, but they're a transient property, likely to ebb and flow for a long time before they plateau. While it's best to start building them up early so you can get plenty of conversions at launch -- and maybe even get premium placement on the Steam Store -- a quality title can prosper over time with a solid Steam page, a quality trailer, and as many eyeballs as you can get.