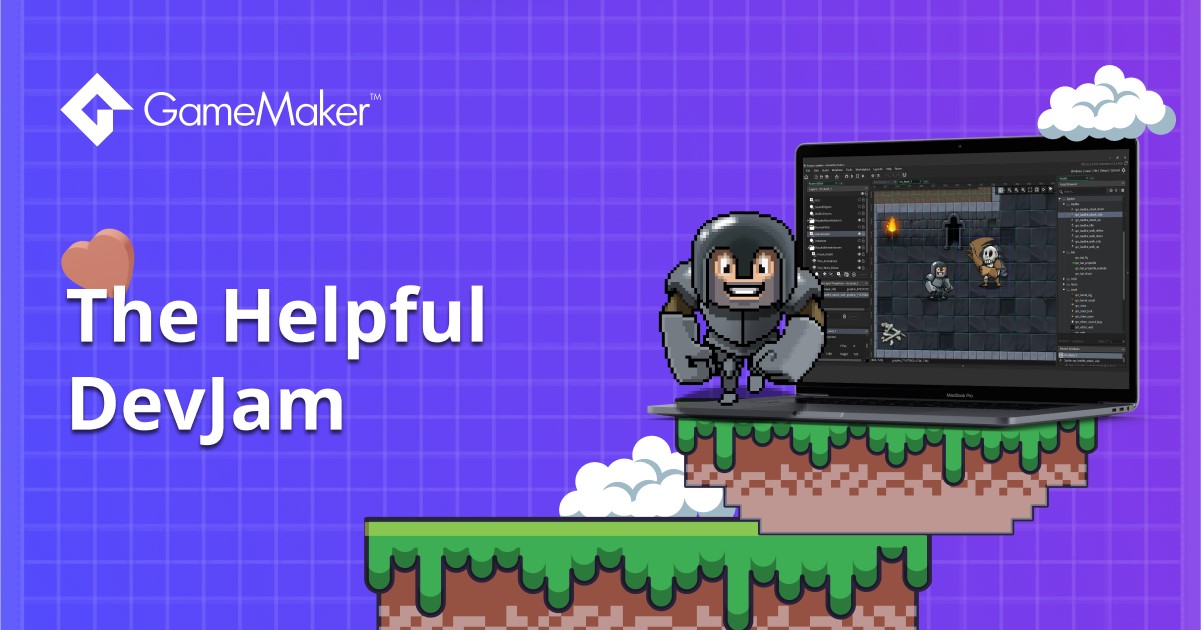 The Helpful Dev Jam has come to a close, and we’ve been truly moved by the amazing response from the veteran developers on the GameMaker Discord. The resources produced in this Dev Jam will help teach new GameMaker users the ins and outs of the engine through the eyes of those who have already been there, done that.We received submissions of all types: tutorials, tools, videos - even a random number generator!

Without further ado, here are the best submissions to the Helpful Dev Jam.

A write-up of how computers generate random numbers, how to do it in GameMaker, how to generate different probability distributions, and other helpful tips, all with interactive GameMaker apps and function source codes.

A tool that automatically updates sprites in your GameMaker Studio 2.3+ project when the matching Aseprite file is changed on the disk - a must-have for those using Aseprite!

A lightweight way to handle many forms of input at once in a simple, easy to edit package.

A recreation of the move and collide system found in Towerfall and Celeste, using GM object parenting. It handles multiple actors like enemies, players and more! Allows for solids that can push and carry the characters, like moving platforms.

A set of functions as a library to import into your project that will help to use arrays at the level of ds_lists.

A simple guide on how to save and load user data that should be persistent between game sessions.

Tweens - Everybody Loves ‘Em, How Do I Use ‘Em? by Mimpy

A short and accessible write-up about creating and using a tween library with animation curves to make your animations ✨pop ✨.

Gameflow Designer is a tool to make easy game progression flowcharts with data that you can export and import as .JSON files.

A pipeline development kit for GameMaker. Includes batch-adding/updating sprites and audio, importing resources from one project into another (including directly from GitHub), programmatically creating assets, and more.

And now, it’s time to reveal our five winners. All of our winning authors will receive a free year on our Enterprise license, and get the opportunity to share their journey with GameMaker in an interview for our blog.

Make even the most mundane of dialogue boxes extraordinary with a collection of five text effects, including “wave", "rainbow" and "shake".

Have you ever been puzzled by code style and architecture concepts in GameMaker? Massimog has your back! This guide explains how to use them, offers valuable advice, and discusses a few engine features you might not be familiar with.

rt-shell is a debug console for GameMaker, which lets you execute custom scripts at runtime effortlessly. Nickaav also prepared a handy YouTube playlist, including how to get started with rt-shell, and how to customize it to suit your games’ needs.

SnowState is an easy-to-use and powerful finite state machine system that can solve problems you didn’t even know you had. What’s more, SnowState keeps your code neat and organized, which means no more managing a thousand different scripts for an object - it's all in one place now!

Collection of Free and Open Source Software for GameMaker by Juju

A collection of almost 100 GameMaker projects written in GML (with the exception of shaders), all under the MIT License, covering everything from antialiasing to encryption to memory management, including:

Scribble - Text renderer supporting a wide range of functions, including animated effects, in-line sprites, and typewriter animations. Includes support for Arabic, Thai, and Hindi, among others.

Input - Input manager made with offalynne. Fixes many bugs in GameMaker's native keyboard/mouse/gamepad support and adds some nifty features on top.

iota - Fixed time step solution. This allows a developer to run their game at any desired framerate with ease.

We’d like to offer another huge thank-you to all the participants of the Helpful Dev Jam. Look out for the upcoming interviews with the authors of the five best submissions.