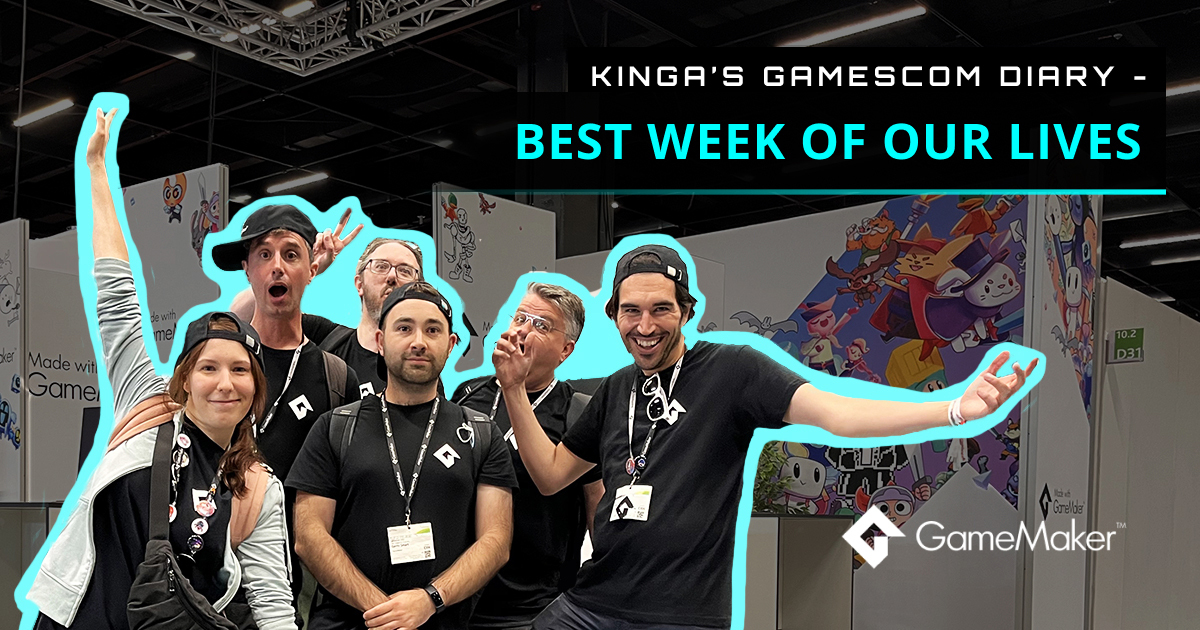 A month passed since Gamescom 2022, but it still feels like it all happened just yesterday. For the first time in a while, GameMaker had a physical booth and we invited developers from our community to showcase their games. We may have returned home exhausted, muttering “never again” under our breath, but looking back at the photos and videos, it was one of the best weeks of our lives.

Gamescom is an annual game trade show in Cologne, Germany. As one of the world's biggest physical gaming events, it never fails to draw the attention of both AAA companies and smaller indie studios. 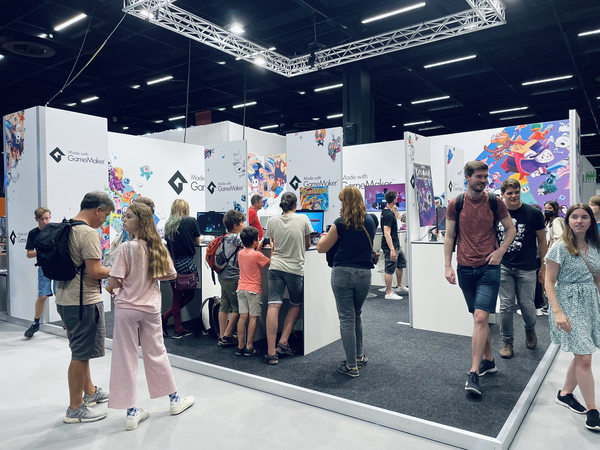 GameMaker both at Gamescom 2022

Due to the pandemic, most of the major game events moved into the online spaces, with a few companies such as Nintendo or PlayStation organizing their own showcases to keep in touch with their fanbase.

For that very reason, this year’s Gamescom felt even more special - with E3's unexpected demise and prompt return, we’ve been hungering for the excitement and buzz of a physical show of comparable size. 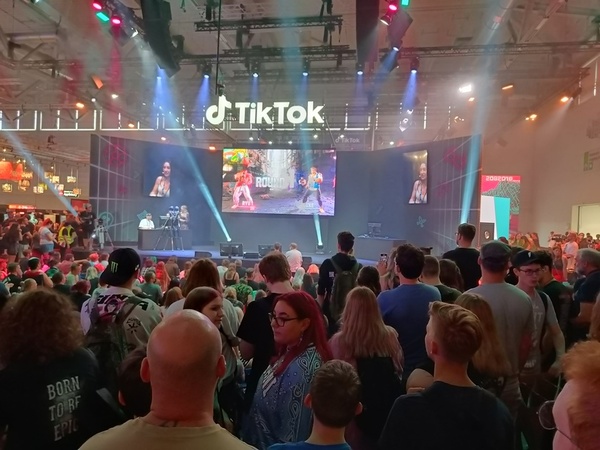 Who was with us?

This year, we decided that the best way to prove GameMaker’s amazing capabilities was to show off some of the amazing games made with it!

We were blown away by all the talented developers who answered our invitation to be featured on our stand. Each of them were a great example of what our engine is capable of.

In the end, we were happy to invite: 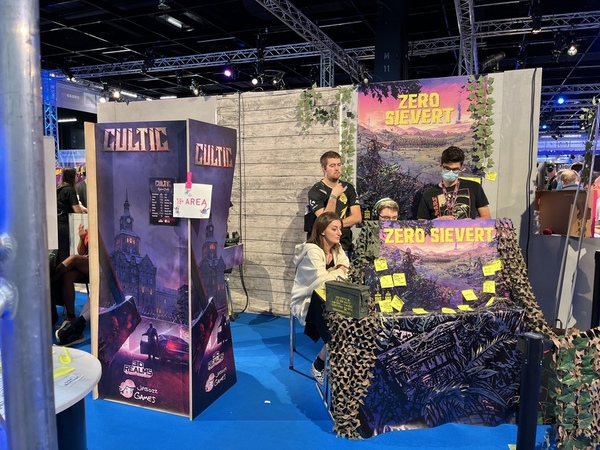 Zero Sievert, one of the games made with GameMaker present in Gamescom's Indie Area

The GameMaker team gathered in Cologne on Monday, greeted by the intense heat of a German summer. We decided to have a look at Koelnmesse, the venue where Gamescom is conducted each year.

We were surprised (and delighted) to discover that our booth was constructed much earlier than most of our neighbors, which allowed us to take some early pictures of it.

Tuesday was when the real work started.

We woke up refreshed and ready for action, of which there was plenty. Computers, TVs, furniture, and WiFi routers had to be picked up, and there was still plenty of paperwork left to take care of. 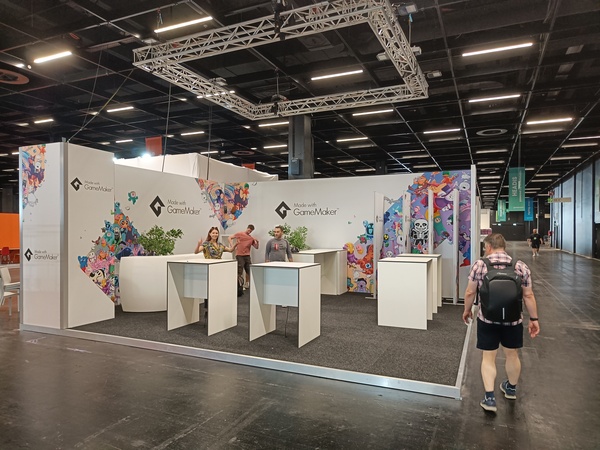 Our unofficial first day at Gamescom 2022

We also started to see the first signs of activity from the construction crews of other stands, but it quickly became clear that most of the work would have to wait until the temperatures dropped to more manageable levels.

The next day at breakfast we were both anxious and excited - it was the first official day of Gamescom, after all! We arrived early, so there was still time to take a look around the venue, and there was a lot to look at.

All the companies showcasing their games in the Entertainment areas tried to outdo each other with breathtaking displays and decorations. Mount & Blade II: Bannerlord booth was particularly fun, and we took a few glamor shots with real knights. Plus, we were able to play all the interesting upcoming releases, such as Sonic Frontiers, without worrying about long queues!

The rest of the show was significantly busier, with huge crowds visiting Indie Area every day to check out upcoming games.

We were very happy to meet fellow GameMaker developers, who were showcasing their amazing titles - especially the creators of Lords Rising and Zero Sievert. We were happy to see more GameMaker games out there, such as Mr. Sun’s Hatbox, Falling Out, darkwebSTREAMER, and Honey, I Joined The Cult. 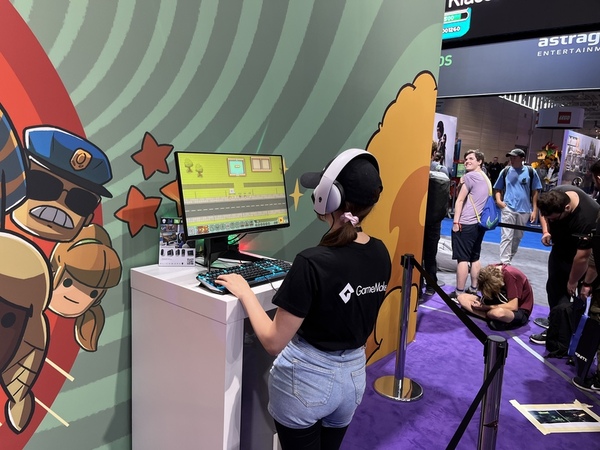 Honey, we joined a cult!

Many visitors to our booth asked about GameMaker and shared ideas for their dream game with us. The crown jewel of Gamescom was the demonstration, during which the GameMaker team prepared a very questionable version of the classic Space Invaders.

None of us expected how hard it would be to depart from our booth on the last day of Gamescom. During that week, it became a second home to us, and it was difficult to imagine returning to our lives outside of it.

We did see our fair share of shenanigans during Gamescom, in no small part thanks to our wonderful developers. They all became fast friends, spending each evening together and sharing many jokes.

We didn’t know if we should laugh or cry when we found out on Saturday morning that Nana wasn’t able to make it to our booth because… she got on the wrong train and fell asleep on it. Getting her back to Cologne from the next town over wasn’t easy, but we managed to! 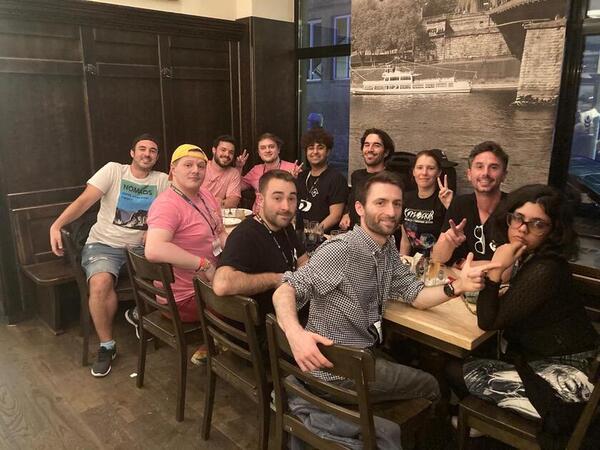 Our goodbye dinner with GameMaker developers, at a traditional German bierhalle

CodeManu was challenging everyone to a match in Guts ’N Goals, rewarding anyone who could score a single goal against him with a Steam Code for the game.

Our departure from Cologne was made a little better when we bumped into the creator of Berserk Boy at the airport.

Compared to previous years, Indie Area at Gamescom 2022 was much bigger and full of life! It featured a section where some of the new and upcoming titles were huddled together, arcade-style, as well as a few separate booths, and Nintendo Switch Stations.

There was never a time when the Indie Area was not busy, with people coming by to play games or talk to the devs almost constantly.

Even with the limited space they had, the developers still did their best to showcase their games in various inventive ways - from constructing a model of a creature from their game to having a human-sized pigeon mascot on set! (We love you, Finley!) 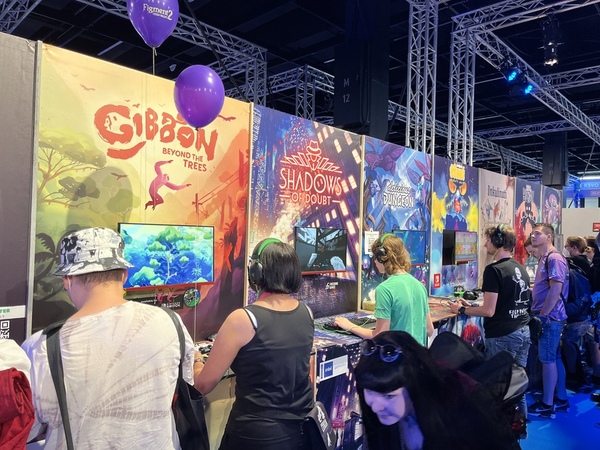 Are physical events still worth participating in?

After the pandemic, many people questioned the need to have any physical events at all, considering how well online shows filled their niche, allowing everyone globally to participate in the reveals of their favorite games and upcoming franchises.

However, there is one thing that those events did not manage to bring in online: networking. 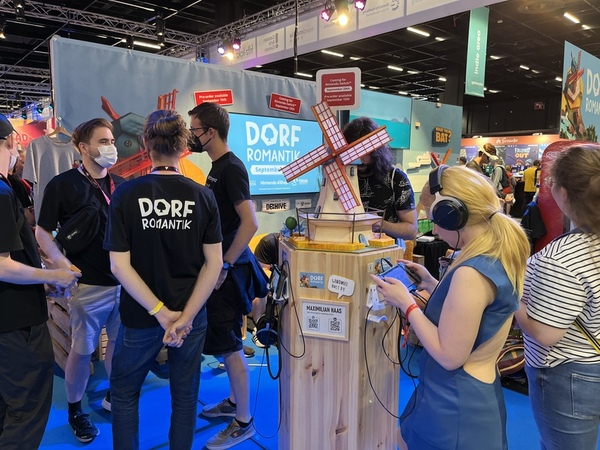 Many developers showcased their games on multiple platforms

Many publishers used Gamescom as an opportunity to scout new titles for their portfolio, while developers encouraged visitors to wishlist their games, try out available demos, or simply to meet other developers.

Over the week, Cologne was filled with groups of game developers sitting together in bars and restaurants, discussing their projects and ideas.

If you’re someone interested in pitching your game idea to a publisher, or who wants to meet fellow game developers, physical events are definitely for you!