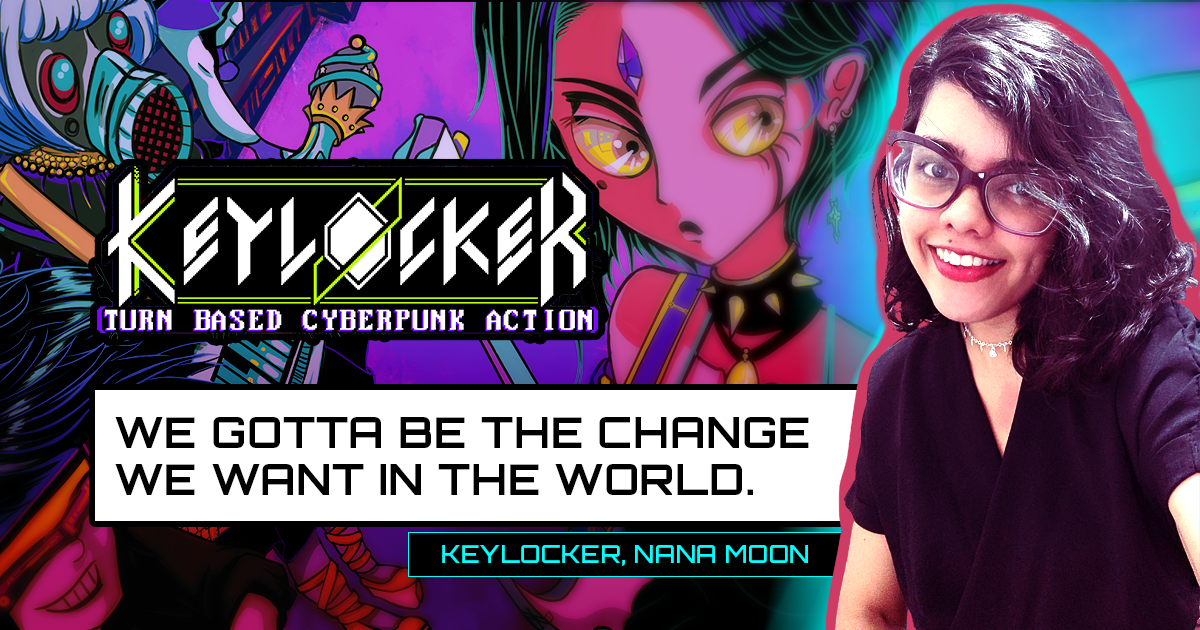 Nana Moon is the head of the development team working on the upcoming indie game Keylocker | Turn Based Cyberpunk Action, and the person behind the magical girl RPG Virgo Versus Zodiac. During our chat, Nana told us about her experiences with crowdfunding a video game, the challenges faced by female game developers, and even revealed her secret identity…

How did you start making games?
Initially, game development wasn't my dream. I saw this small indie game called LiEat on Steam, decided to play, and fell in love with it! I thought to myself "Woah, maybe I can do something like this, sounds really simple!". Of course, I was very wrong about it being simple, but the initial push was all it took.

Why did you decide to use GameMaker?
At first I wanted to use Wolf RPG, the same engine LiEat was made on, but it was all in Japanese, so I used RPG Maker to create a small prototype of Virgo Versus The Zodiac. After a successful crowdfunding campaign, I moved to GameMaker, since it allows for easy porting to all platforms. However, what kept me and my team in it was the great Room Editor. It has lots of options using layers, as well as the speed with which you can add assets. It's very useful to just be able to drag a Gif into the engine and have it all set up as a frame-animation.

The engine is really powerful overall, allowing us to make the exact types of games we like, while keeping it simple enough that me and Anglerman, our animator, can use the engine without much struggle, and we're not programmers. Still, it's really tough to make an isometric game using the Room Editor as it is, since it’s locked in a square grid. The lighting system also isn't as robust as we'd like it to be. 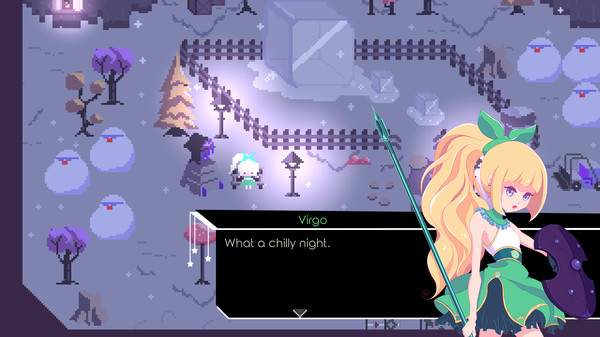 Virgo, the main protagonist of Virgo Versus The Zodiac

Is there a studio you particularly admire?
I love FromSoftware because of their insistence on making their games challenging but fair, while not giving in to the excessive assistance to players the rest of the industry is obsessed about.

What is your design philosophy?

We at Moonana believe the games we make must bring in some challenge to be rewarding, and that without struggle, the player can't appreciate their victory to the fullest.

What was your inspiration behind Virgo Versus The Zodiac?

Astrology was the first inspiration. Me and Anglerman were discussing which RPG class each zodiac sign would be when the idea of Virgo being a heretic-killer, ultra-lawful paladin on a mission to kill all other zodiacs came to be. Inspirations came from other RPGs I've played in the past as well, such as Earthbound, Mario&Luigi Superstar Saga, Off, and of course LiEat. 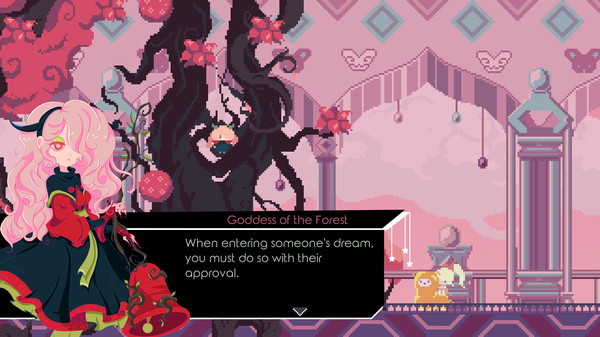 Virgo Versus the Zodiac by Moonana Games

After Virgo Versus Zodiac, we published Osteoblasts. It’s a dungeon crawler Skeletal RPG in which you play as a spooky scary skeleton, raised from the dead by a mysterious Cat Witch on a journey to find purpose. You get to choose a class and go on frightening adventures battling your nemesis - the Dogs - who unburied you from the depths below.

We’re currently working on Keylocker | Turn Based Cyberpunk Action, which was successfully Kickstarted, and on another secret small project.

It's a cyberpunk tactical RPG with rhythm elements and a sprinkle of fantasy on the middle-eastern mythology-inspired plot. It tells the story of an oppressive society living on Saturn, where music is outlawed.

You play as Bobo, seemingly the last singer, and Rocket, a Jukebot able to play music like Bobo. They form a band with a pack of misfits and decide to fight the government on their own with what they have - old guitars, drums, and bass from the times where music was still alive. They hope to bring music back, but that will be up to the players, as the game features several endings and different storylines with its multiple classes system. 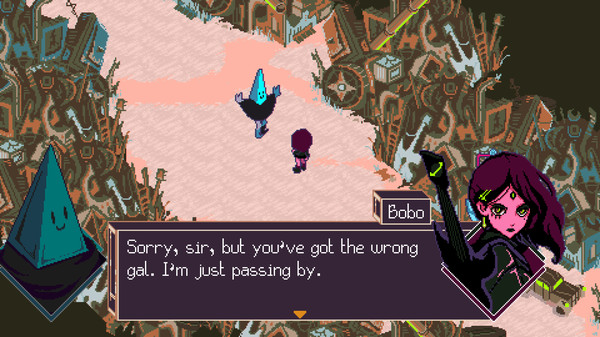 Bobo, the protagonist of Keylocker, being bothered by a stranger

Before we started our Kickstarter, we were refused by all other possible types of funding, since the game is rather niche and developed by a woman. It’s hard to talk to possible investors when your idea is outside the box of what they see as acceptable.

Preparation for the crowdfunding took about a month or so, prepared some marketing materials such as the MV for Bobo’s band, formed partnerships with other crowdfunding developers, and did some social media promoting during that period.

Most of our backers came from discoverability on Kickstarter itself, and we got a lot of new fans - we had about 350 followers on Kickstarter before the campaign! Throughout the crowdfunding process we wanted our fans to be closely connected with the development, and to be able to produce content together with them, using rewards like "Make your own NPC" or "Make your Quest/Weapon".

Considering your experience, do you think female game developers are discriminated against in the industry?

I always worked as the Director of the studio, and I work with a lot of men, but I've never had real issues with them as we all have mutual respect towards each other. I have mad respect for the magic they can perform with my ideas, and they also admire and respect me for the work I do. However, for many girls in the industry, this kind of story sounds like a dream, as they go through disrespectful superiors, stupid power plays, and pay gaps. I heard some horror stories about harassment in the industry. That's not something I went through as a developer, but it's a fact that it happens a lot.

Still, there are many female-led studios and solo woman developers doing really cool stuff, like Camilla at Bura with Long Gone Days, Ebihime who is a kinetic visual novel solo developer, Son M. at Perfectgarbo developing Love Shores, so I have hopes for a brighter future. I think it's still sad that investment groups focused on games made by women still have so many male investors. We gotta be the change we want in the world, after all, and having these old geezers still curating the content made by women is kind of a bummer when it's supposed to be a safer space for us. 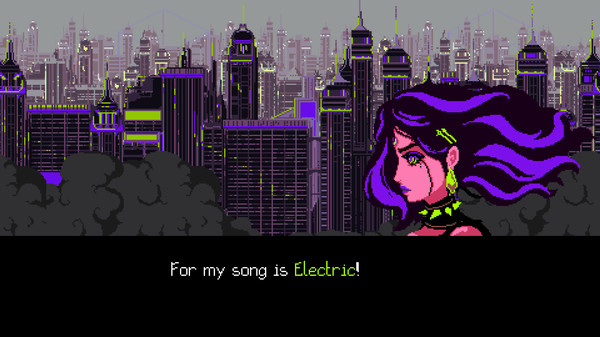 Fragment of a cutscene from Keylocker

What’s most challenging about being an independent game developer?

Marketing, hands down, especially considering that a few years ago, all it took for a semi-high quality game to succeed was to get some traction going. It's way harder these days because of the competition and how storefronts work in regards to actually showing the game to people who might be interested.

It’s a problem in several aspects of our current society where there is enough content for everyone, but the real challenge is to filter all the unrelated things and actually manage to find the games you're looking for. The algorithm can be an ally, but also an enemy if you don't get enough clout outside of Steam before launch.

My team has many games planned out, some even have their full game design documentation ready for implementation! We'd love to branch out on genres a bit, to try out action RPGs as well as tactics and strategy games. We also hope to expand and have two teams working on games at the same time in the future.

I’m an Alpaca who transforms into a girl to use the computer. Unfortunately, there are no accessibility options for Alpacas in this Human dominated world!

Our wooly overlords in Virgo Versus The Zodiac