How to Add Multi-Touch and Virtual Joystick Controls 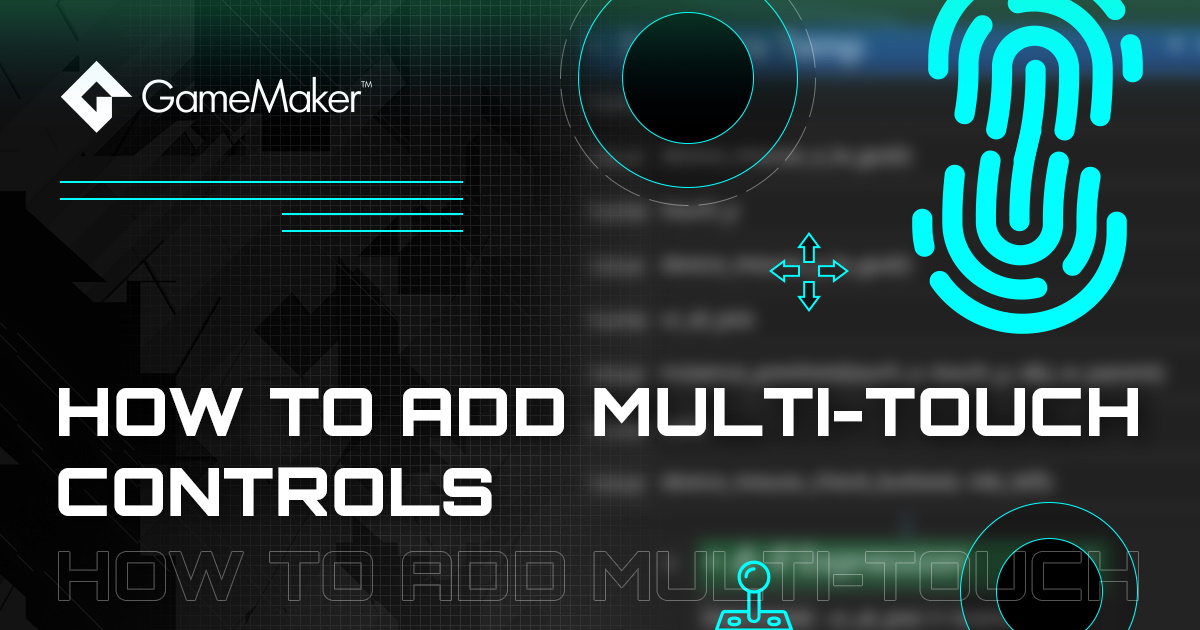 Download the project containing all code shown in this tutorial.

There are a few common ways of detecting mouse input in GameMaker.

You can use the “Mouse” events in an object to detect clicks and hovers: 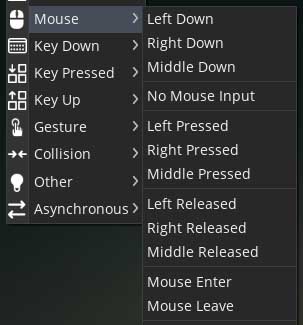 In GML Code, you can use the mouse_check_button() family of functions to detect clicks, and mouse_x / mouse_y to detect the position of the cursor.

All of these methods are compatible with touch screens.

For example, if your game already has a button system that works with a mouse, it’s very likely that it’ll work on a mobile display as well.

Create a button object, and add a Left Pressed event: 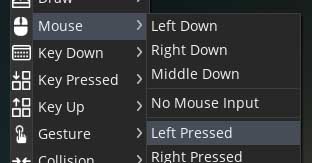 In this event, add code or actions for what you want the button to do.

It will respond to your touch when run on a mobile device.

This button will work fine in a simple room, but it won’t work well if you’re using cameras.

Before creating a virtual joystick, let’s look at multi-touch in GameMaker.

Each “touch” is detected as a “device”. You can read such devices from 0 to a maximum number using a loop.

Create an object for managing multi-touches: obj_multitouch_manager. Place it in your room.

Also create an object that serves as a parent for all UI objects: obj_ui_parent.

In obj_multitouch_manager, add the Begin Step event, with the following contents: 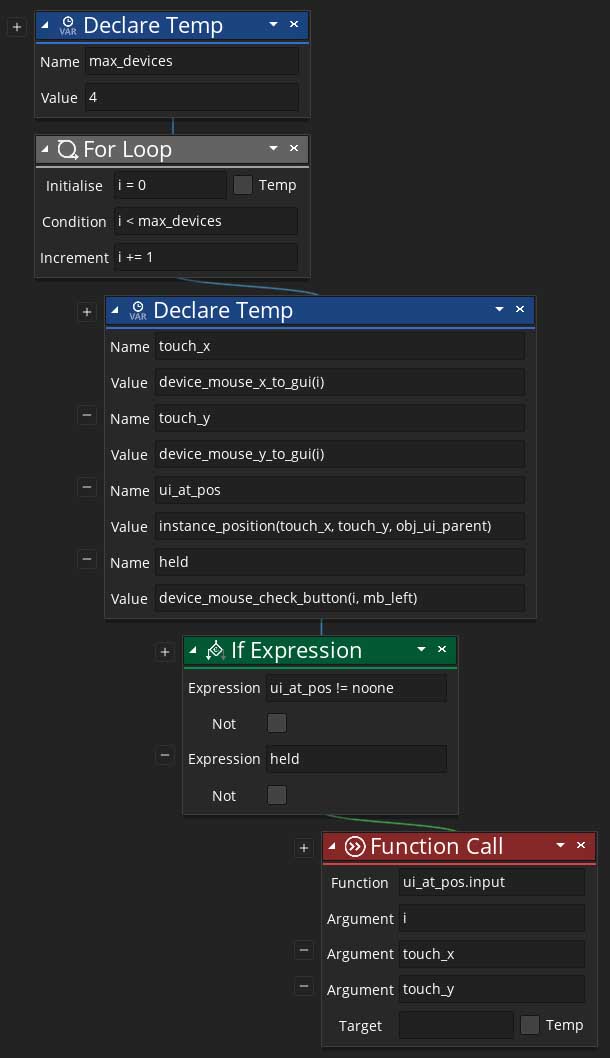 Allowing a maximum of four touches, it loops through all devices and gets their touch coordinates.

It tries to find a UI instance at each touch’s position and checks if the touch is being held.

If a UI instance is found, and the touch is being held, it calls the input() method in the UI instance that was found.

The input() method is how we tell a UI instance that it’s being pressed. We pass in the ID and coordinates of the touch.

Because our touch manager calls the input() method in a UI object, obj_ui_parent needs to have it initialised in its Create event: 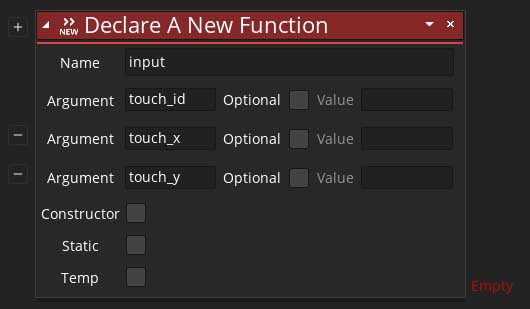 This function is currently empty, and will be implemented in a child object – such as a button or a joystick.

Earlier in the tutorial, we used the Left Pressed event to detect clicking on a button.

To create a button that uses your shiny new multi-touch system, do this:

Create a new object: obj_joystick. Make this a child of obj_ui_parent.

Assign the spr_joystick_base sprite to it. 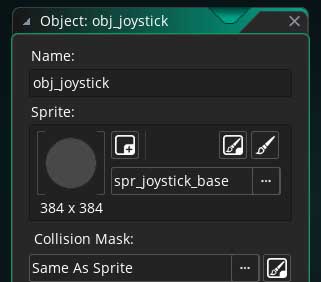 Add the Create event, and add this there: 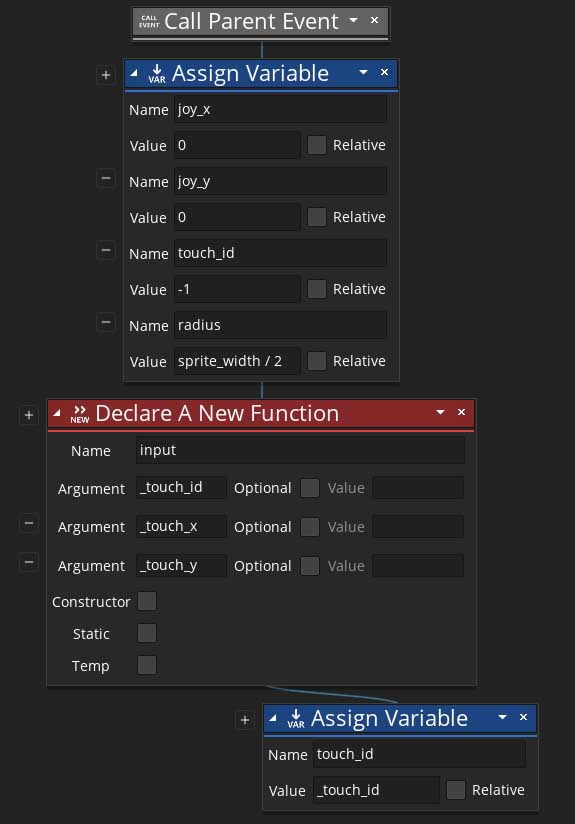 This first runs the Create event of the parent.

It then initialises joy_x and joy_y, which store the relative position of the joystick.

It initialises the joystick’s input() function, which simply stores the ID of the touch in a variable.

Add the Begin Step event with the following contents: 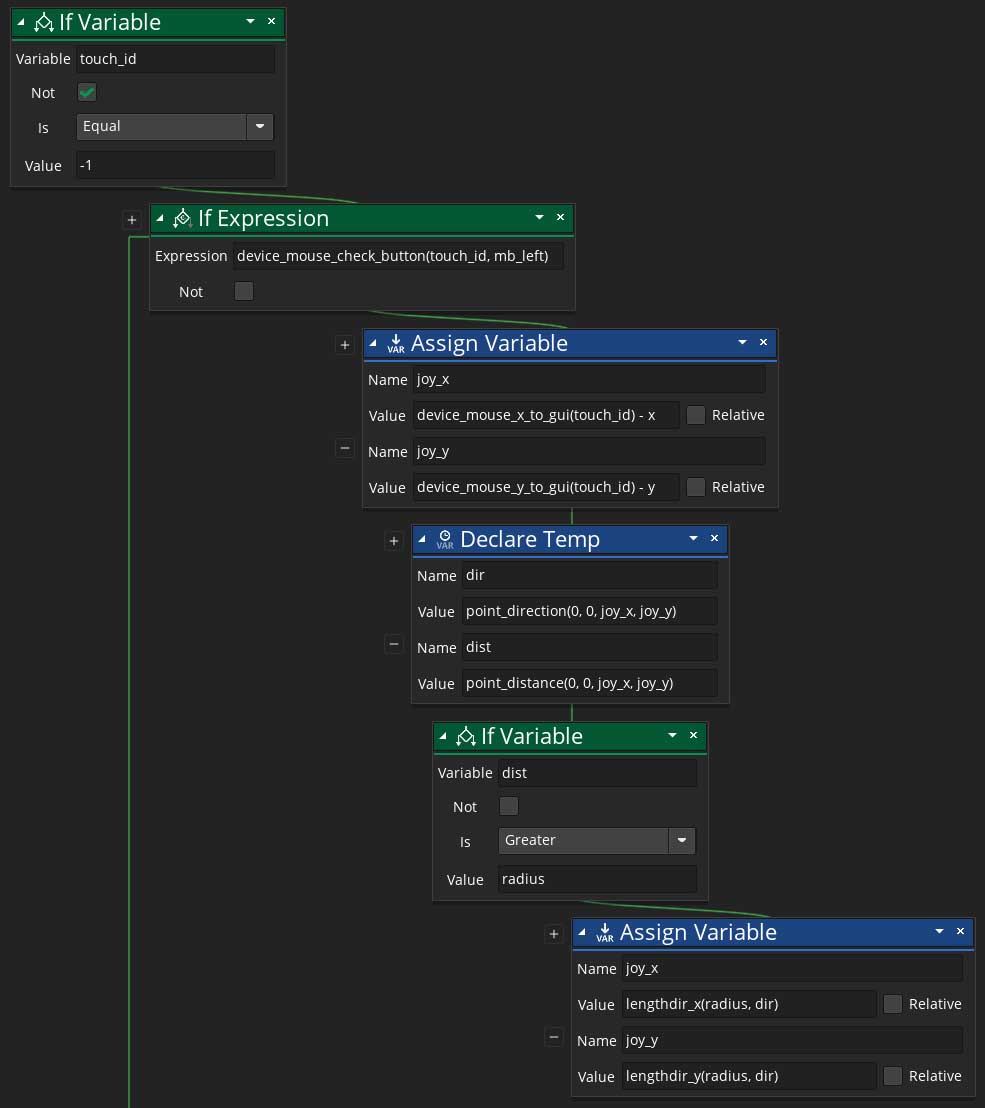 All of this code runs only if the touch ID is not -1, meaning the joystick was pressed.

If that touch is being held, we set joy_x and joy_y to the relative position from the joystick to the touch.

To ensure the joystick doesn’t go beyond its base, the code does the following:

The else block runs if the touch is not being held, in which case it resets the joystick and touch ID. 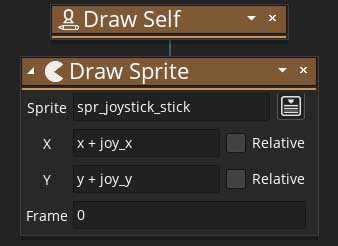 This will draw the joystick base, and then the stick itself, using joy_x and joy_y.

Now, place your joystick in a room – you can even place multiple joysticks to test multi-touch:

In the video above, the game is running on Opera GX Mobile, with the system detecting all 4 touches, and each joystick operating separately.

To use the joy_x and joy_y values in your game, you can divide them by the radius to get normalised 0-1 values.

As an example, I’ll add this to the Step event of my player object: 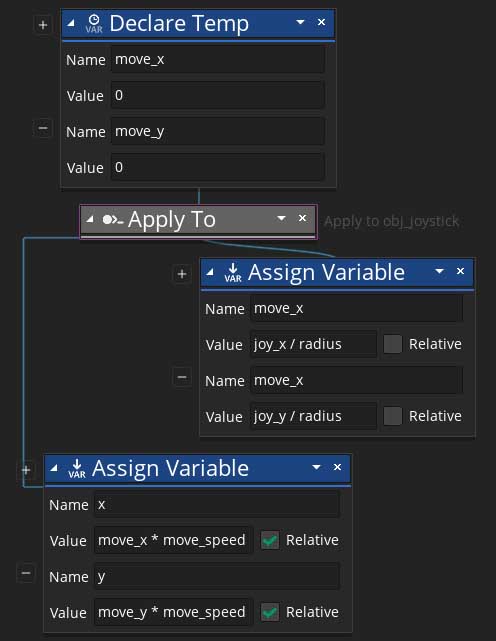 move_speed needs to be initialised in the Create event. Mine is set to 4.

The player can now be moved using the joystick:

It also moves slower when you push the joystick just a bit!

Download the GML Code project to test it yourself.

Follow the GUI Buttons tutorial and incorporate it with this tutorial to add more multi-touch GUI to your game.

The Windy Woods template in GameMaker has multi-touch controls implemented, which appear if you run the game via the Opera GX target.

You can take a peek at its code and learn how it’s done.