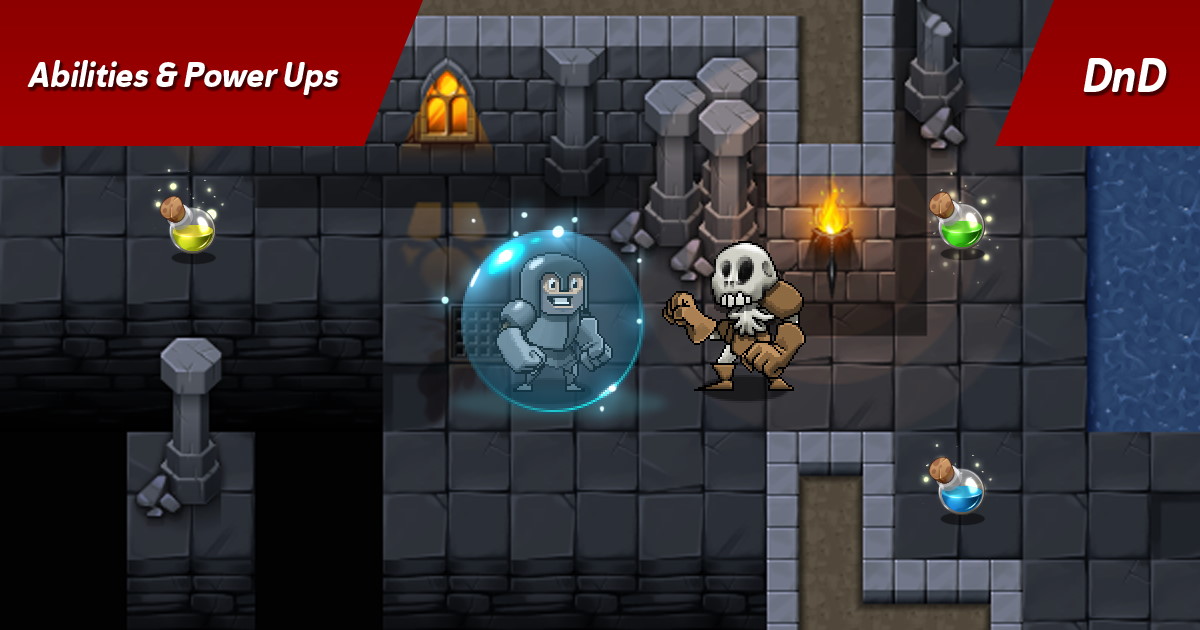 This tutorial expands on the Hero’s Trail project provided with GameMaker. We’ll give the player the ability to attack in all four directions and use a shield, as well as add heart pickups and speed/invincibility power ups!

This tutorial has the following sections:

Currently the player can only attack left or right, so we’ll now allow it to attack in all 4 directions. For this we’ll create a variable to store the direction that the player is facing in.

This variable can have any one of the following values indicating the input direction:

This is how the player will know where it's facing, and will be able to rotate the sword to face in the same direction!

This variable will be set in each arrow key event, so the following events will need the actions shown next to them:

Now when the player presses an arrow key, the input direction will be set accordingly. We can use this value to swing our sword in the correct direction!

When the sword is created, we’ll change its rotation so it uses the input_direction value as its image angle. Let’s do the following:

Run the game now and you will be able to attack in all four directions. We just made the game a lot more fun and easier!

Refer to this tutorial for adding bat enemies.

The player can lose hearts, so we need to resupply them with heart pickups throughout the level so they can keep fighting.

Follow this tutorial to add a hearts system to your game if you don't already have one. 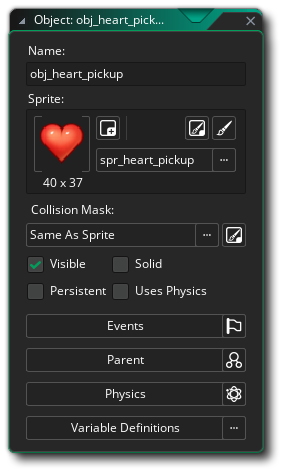 You can now go ahead and place these hearts in the room, inside the “Instances” layer. 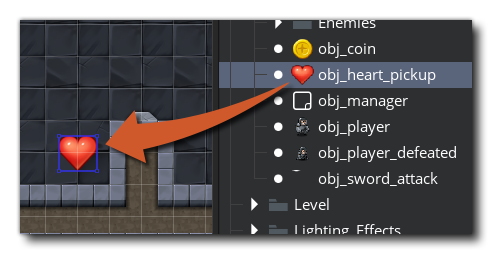 We’ll now make the player able to collect these hearts by colliding with them.

The player will use a collision event to check if it has collided with a heart pickup.

In that case, it will then check if the player has fewer hearts than it should.

If that is true, the player's hearts will go up by 1.

The colliding heart pickup will then be destroyed.

Use the following settings for your actions: 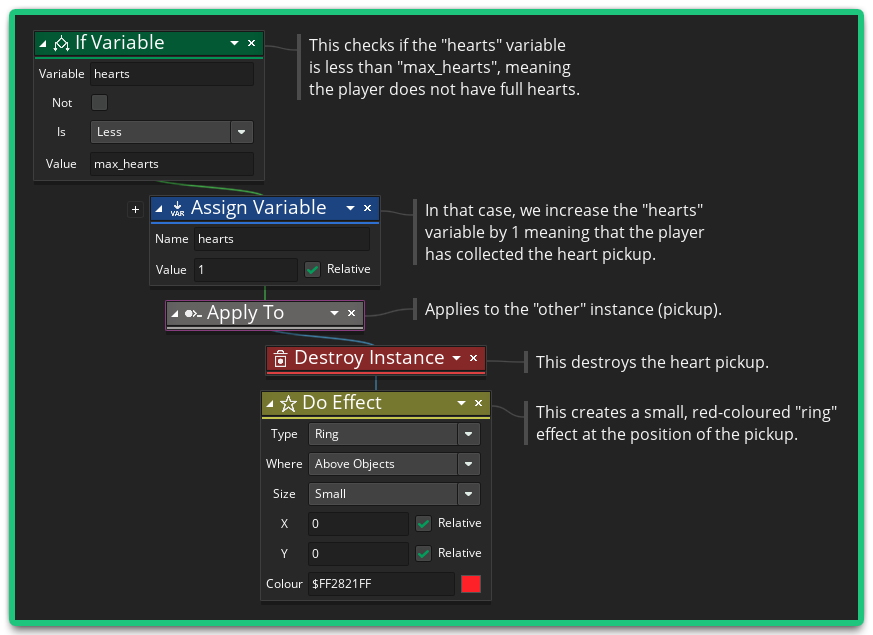 You can now run the game and pick up hearts! You’ll notice that you can’t collect them when your hearts are full. This makes sure that any excess heart pickups are saved for later.

We’ll now create a power up that makes the player super fast. Let’s start by setting up the power up object: 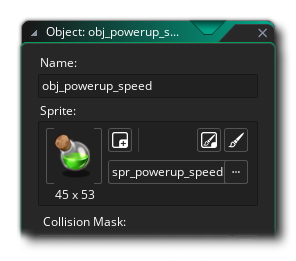 Now go ahead and place this power up anywhere in your room. For now try to place it near the player’s starting position so you can test it quickly.

We’ll create a power up system in the player object, so it can equip powers that last for a certain amount of seconds (for as long as you like!).

Let’s do the following to create our power up system:

Collecting a Power Up

The player should be able to collect a power up and have its properties changed based on the power up.

When the player collides with a power up, some of its properties will change.

In case of the speed power up, we'll simply increase its movement speed and animation speed.

We'll then use an Alarm event to disable the power up and reset these properties back to their default values.

Let’s implement the effects of the speed power up by doing the following: 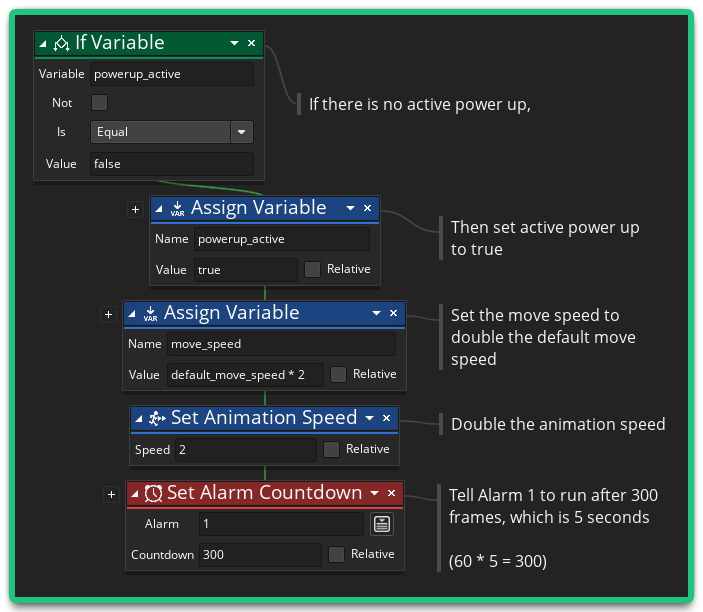 Tip: You can resize an action box by dragging it from its sides. This makes it easier to see fields that are too long.

Since we’re setting Alarm 1 to 300, it means our speed effect will last for 5 seconds.

We also need to destroy the speed power up instance, so let’s do the following:

Use the following settings for the particle effect: 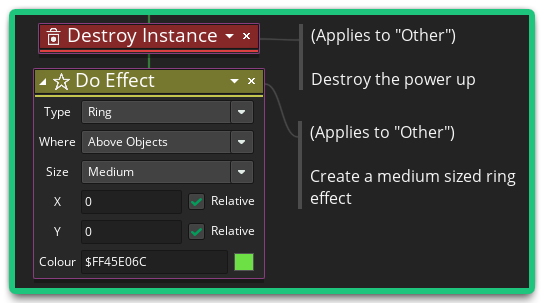 Disabling a Power Up

Picking up the speed power up will tell Alarm 1 to run after 300 steps. That event should then disable the power up, so let’s implement that: 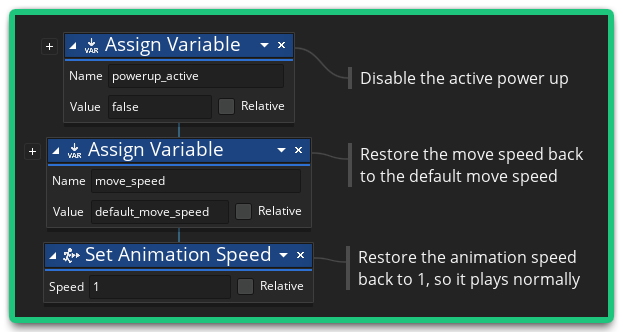 This will now handle disabling the power up a few seconds after it has been collected.

You can now run the game, collect the power up and run around faster than ever before!

The power up works well, however we can make it better by adding a “trailing frame” behind the player.

While the speed power up is active, we’ll draw a transparent image of the player one frame behind it so it looks like the player is going fast.

We’ll use the Draw event for this, which allows us to draw something over the instance. Let’s begin by adding the event:

Use the following settings for the new actions: 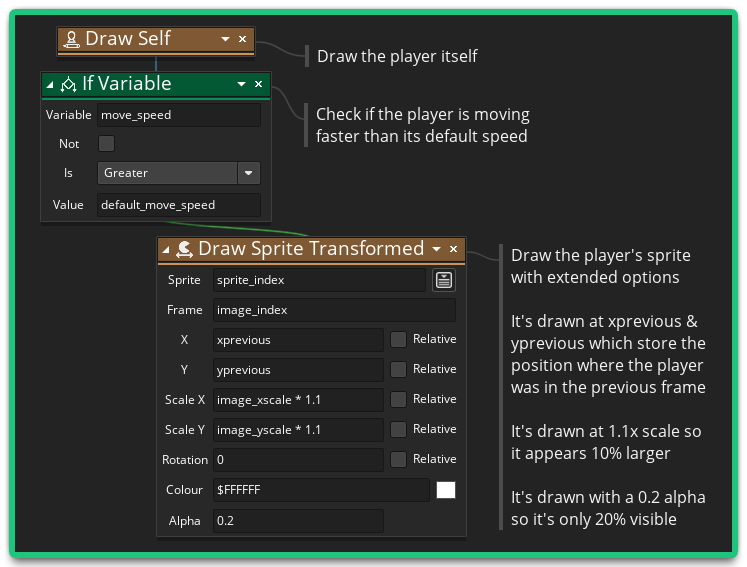 For the “Sprite” and “Frame” options we’re simply passing in the sprite_index and the image_index, which store the current sprite and frame of the instance respectively.

Using these options, the player’s sprite will be drawn at its previous position, so it will appear “behind” the player.

Now run the game, collect the speed power up and you will see the trailing frame behind the player, giving a nice “boost” effect!

We’ll now add an invincibility power up that makes the player able to defeat any enemy with just a single touch. This pickup will be useful as a reward for the player discovering a hidden area!

Let’s start by adding the power up object: 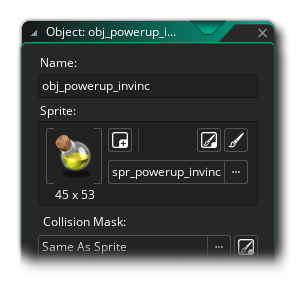 You can now go ahead and place this somewhere in the room.

The star/invincibility power up will be activated in the same way as the speed power up: in a collision event. However before we do that, we need to create a new variable.

Let’s now make the player able to collect a star power up:

Here are all the new actions: 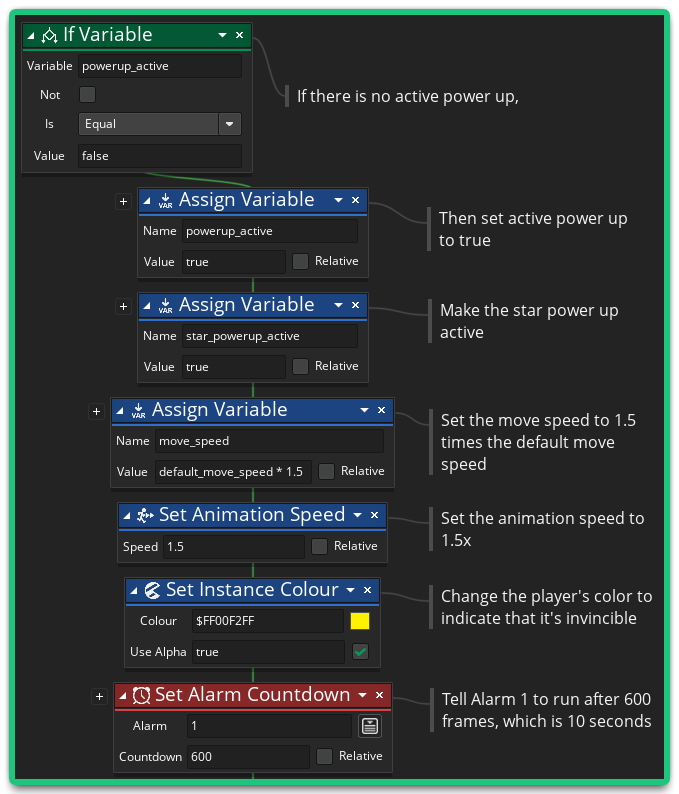 As previously mentioned, this power up will last 10 seconds. Of course, feel free to change this to your liking!

After these actions we also need to destroy the power up itself and create a particle effect; for this, we’ll use the same actions we used for the speed power up (make sure to apply them both to “Other”). Also make sure to attach them to the main condition. 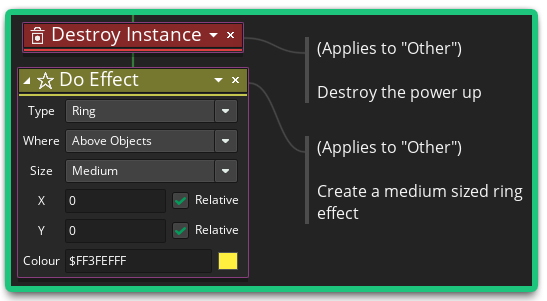 You can now run the game, pick up a star and roam around for some seconds with a changed colour, however it doesn’t make you invincible yet. Let’s work on that!

While the star power up is active, the player should be able to defeat all enemies it touches. We’ll achieve that by creating an invisible sword instance when the player touches an enemy, which will defeat the enemy without the user seeing the sword at all!

Here are the actions: 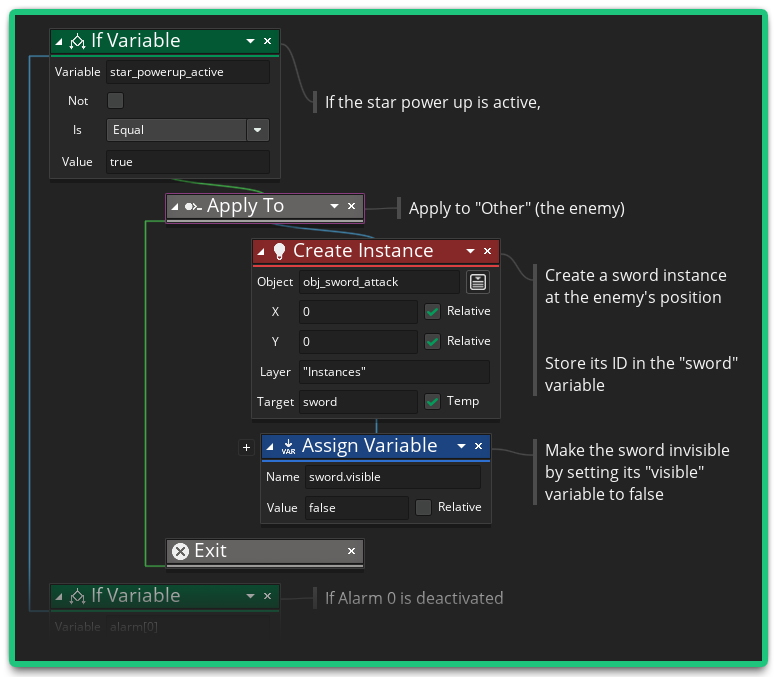 You can now run the game, pick up an invincibility power up and go on a rampage!

We’ll now give the player an energy shield so they can protect themselves, and add a limited “energy” meter that drains while that shield is active.

Let’s start by creating the shield object -- this will be the actual shield that spawns on the player to protect them, not a pickup. 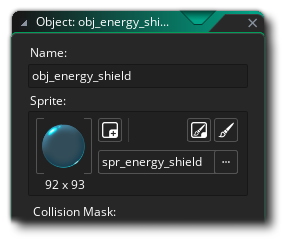 We want this shield to always move with the player. Our player moves in the Step event, so we’ll use the End Step event to move the shield after the player has moved.

This makes sure that the shield always sticks to the player, by jumping to its position every frame.

Before the player can activate its shield, it needs to have a variable to store the shield energy. The shield can only be activated if this energy level is above 0, so let’s add it:

We’ll now make the player able to activate the shield by pressing the Shift key. Here’s how we’ll do it: 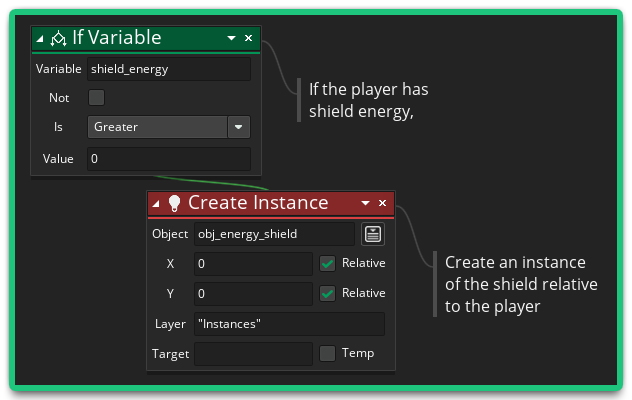 This will now create a shield instance whenever the Shift key is hit!

When the Shift key is released, the shield should be destroyed. We’ll do the following to make that work:

We’ve got a basic shield system working, however it can’t block enemy attacks yet. Let’s work on that!

While the player’s shield is up, all enemy attacks should be ignored. Here’s how we’ll do that:

Now, when an enemy collides with the player, it will check if a shield exists in the room, and in that case it will exit the collision event. This means the player will not be hurt.

You can now run the game, activate the shield, go near an enemy and see that it won’t hurt you at all!

Now this does make the player a little too powerful, as you’re able to attack enemies while holding the shield up. This shouldn’t be allowed, so we’ll disable the player’s sword while the shield is up.

This is the exact same thing we did in the player's collision event with the enemy parent.

This will now stop the event if the shield is being used, preventing the player from attacking.

So we have added a mechanic (shield) that blocks two other mechanics:

This is why conditions are powerful, as they allow you to change how your game functions depending on what the player has done, resulting in more interesting game mechanics!

We have a shield_energy variable in the player that stores the player's shield energy (up to 100). Let's draw this as part of the game's HUD so the player can see how much energy they have left!

Use the following settings for drawing the energy meter: 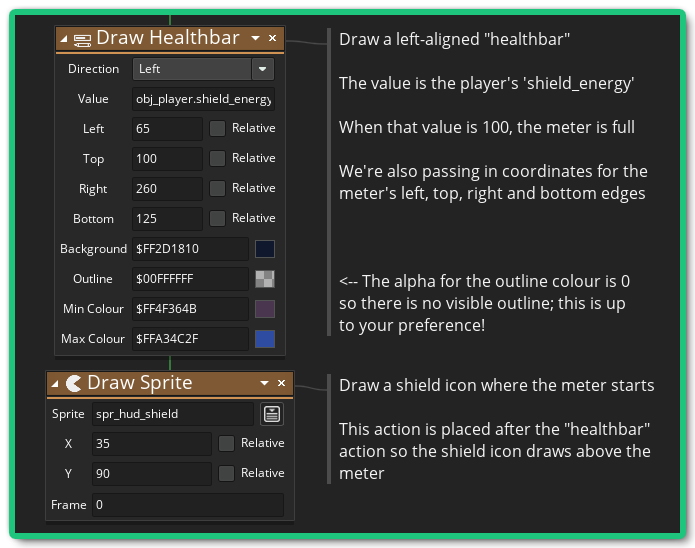 The “Left” and “Top” properties define the top-left corner of the bar (the point where it starts), and the “Right” and “Bottom” properties define its bottom-right corner (where it ends). You can modify these values to move the bar.

You can now run the game and see the bar on the HUD! 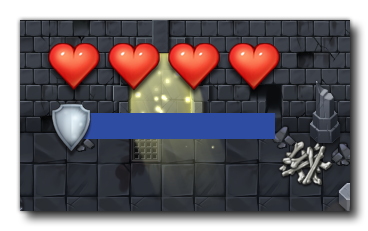 Let's now make it go up and down depending on the player's usage of the shield.

The player’s shield energy should deplete while the shield is being used, so let’s implement that: 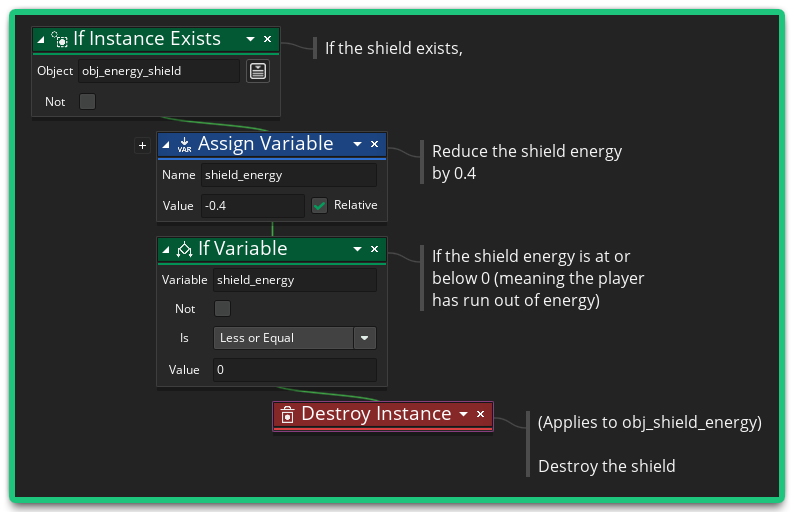 The energy will now go down while the shield is out, and once it runs out, the shield will be destroyed. Try it out!

The energy should recharge after it has run out. We’ll do this in the same event (Step):

Basically, when the shield is not activated and the energy meter is unfilled, it will fill up by 0.1 every frame until it reaches 100.

Try it out: see how the shield automatically disappears when you run out of energy, and how it starts filling again automatically!

You can also modify the depletion and recharge values of the shield energy in this event, customising the difficulty of your own game!

Our player is now more powerful than ever, with collectible power ups that give them an edge over all enemies and an energy shield that can be used for strategic combat.

In the next part, we’ll finish up our game and work on game essentials such as music, sound effects, pausing and a help window.

-> Continue to next part

-> Go back to index page