The Long Journey Of DYO 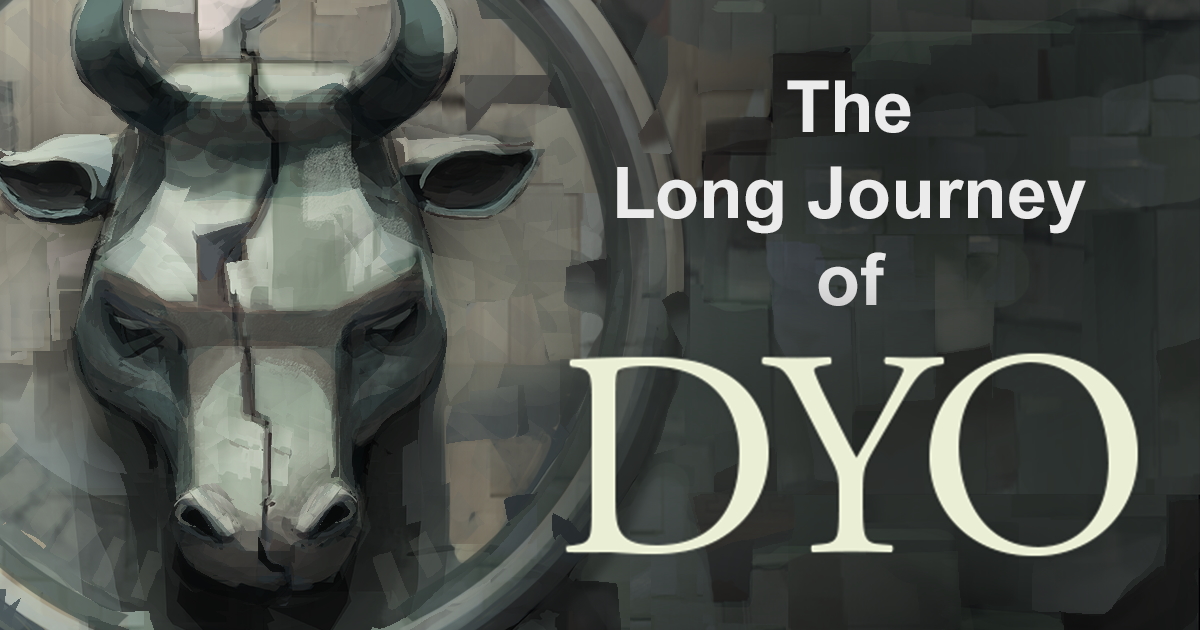 This post has been written by guest contributor Josia Roncancio who is the programmer and one of the game designers of Team DYO.

A week ago, we released our game DYO after almost four years of development. It’s a local co-op platformer about two minotaurs trying to escape an ancient labyrinth by hopping between two sides of a split screen. In this blog post, which will be the first in a series of posts about the development of DYO, I’ll briefly talk about how we got started, inspirations behind the concept, and the history of the game.

HOW IT ALL STARTED

DYO started out as a holiday project of four Game Design students. We just finished the first semester of studies and couldn’t wait to start our first actual game project. So we decided to make a small game during the one month of summer break we had before the next semester. Little did we know, we would still be working on this little hobby project while taking our bachelor exams almost four years later.

We decided pretty early on that we wanted to make a local co-op game since we thought that while competitive multiplayer was an oversaturated market, there was not a lot of good cooperative games out there. The core concept of the game was born after a very long day of brainstorming. We exchanged ideas about possible game mechanics that would be fun in local co-op. Finally, when we were almost out of ideas, we came up with the concept of merging a split screen, and immediately knew this was something worth trying out.

The inspiration for the split screen mechanic actually originated a long time before that. Before I got into making games, one of my biggest hobbies was drawing comics. And one thing I remember being very fascinated by was the idea of having characters from different panels of the comic interact with each other across the page. I had seen a couple of comics use the concept in some form or another, but rarely as more than a one-off joke. I remember fantasizing about the possibilities and planning how to build a full comic around the idea, but never really got anywhere with it.

And that’s how the idea for DYO was born. Years later, when brainstorming about our new game and looking at other examples of local co-op games, the thought suddenly came back to me. A split screen is really not that different from two comic panels. What if there was a way to have them interact with each other across the screen?

With this very simple idea in mind, we started prototyping the game. Before we started programming, we did analog prototyping to figure out some basic things and to make sure we all had a similar idea of how the mechanic would work. We used wooden toy blocks to quickly sketch out some basic level structures and crafted two frames out of paper to represent the two split-screen halves. By moving around the pieces and experimenting with different scenarios, we quickly found that even with nothing but the two player characters and a level made of walls and floors, we could already design some very interesting play situations.

However, the more complex our level ideas got, the more difficult it became for us to keep track of the two split-screens and the player positions. So we needed a digital prototype as quickly as possible. Using GameMaker allowed us to very quickly put together the basic functionality of our core mechanic. After only a day’s work, we had a very simple version of what would later become DYO.

A thing few people know is that the version of DYO you can buy on Steam now is technically DYO 2. The original version of DYO was finished after a month’s work. We now call it a prototype whenever talking about it, but it was supposed to be the full game. It consisted of 15 levels, had a finished visual style, and even its own soundtrack! We were pretty happy with the result. Now the new semester was starting, we continued our studies and moved on to other projects.

Well, at least for a while…

Half a year later, we got the very lucky opportunity to show DYO at gamescom, which is the biggest gaming expo in the world. The professors from the Game Design course we were enrolled in had gotten wind of our little side project and gave us the chance to exhibit DYO at their booth, which we gratefully accepted. This was the first time we watched strangers play the game and the feedback was overwhelming. Several other developers saw the game’s potential and encouraged us to keep working on it.

Shortly after gamescom, we got the team back together and decided that we would continue working on DYO and make it into something bigger. Our studies demanded a lot of our time, and most of us were working half-time as well, but we still tried to work on the game as often as possible. Our original artist Sara left the team and Fabian joined in her place, bringing a completely new look to the game.

At the end of 2016, we decided to try our luck by submitting the game to the „Upcoming talent“ category of the German Video Game Awards. To be honest, we didn’t expect anything to come out of it. We were very surprised when we got invited to the award ceremony, and even more so when they announced us in first place. Besides making us feel incredibly honored, this also meant we suddenly had a budget to work with, since the award included a considerable amount of prize money.

The last big stop on DYO’s journey is Sweden. At gamescom 2017 we met James, the owner of Spelkollektivet, a gamedev incubator located in the middle of the Swedish woods. He invited us to join the house and we decided to give it a shot. It was the perfect timing for us since, in addition to just finishing our bachelors, the prize money would allow us to work on DYO full time for a while without having to take additional jobs to survive. So in January we all quit our jobs, gave up our flats in Berlin, and moved to Fridafors, Sweden.

During our first month here, our productivity rose through the roof. Finally having a proper workspace and lots of time to work allowed us to finish the game for release in little more than five weeks.

DYO is now available on itch.io and Steam, but that doesn’t mean the end of Team DYO. We still have plans for expanding DYO, as well as a next project, both of which we’ll announce very soon.

If you have an interesting story to tell about the development of your game, that you would like to share with the GameMaker community, email [email protected]