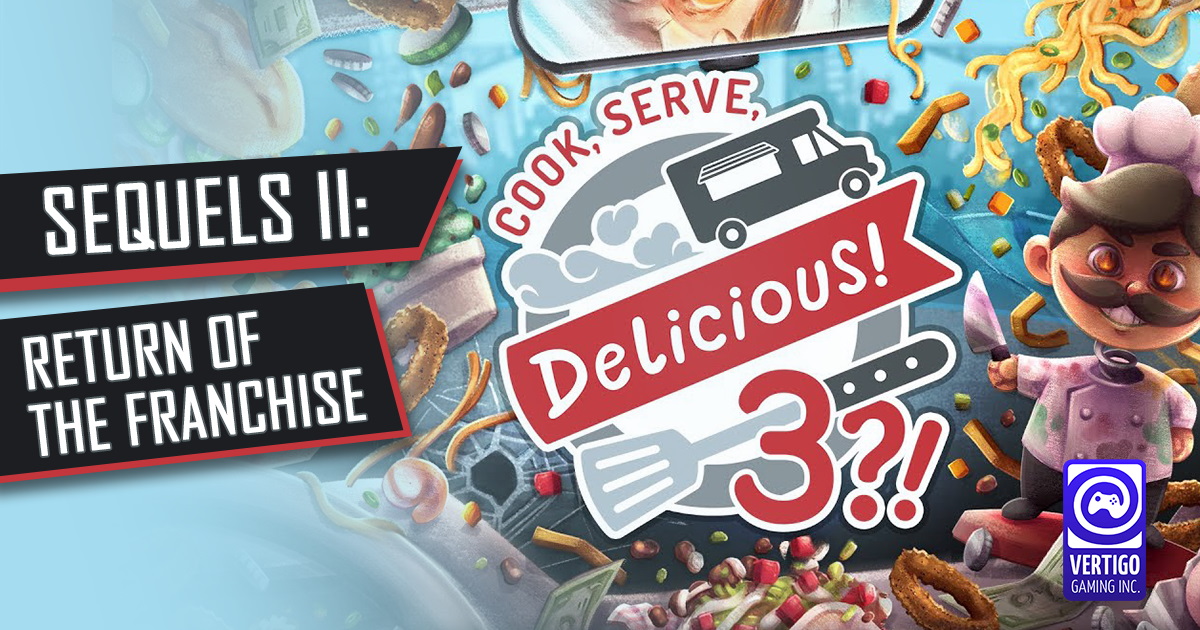 David Galindo, creator and developer of the game series Cook, Serve, Delicious!, returns to our blog to tackle sequels and creating a multi-game franchise while being an indie developer.

Why are indie devs so afraid of doing sequels?

It’s a question that comes into my mind every time a major DLC pack is announced adding hours of new content, or developers going for another genre or completely new experience from the game that showed a good amount of success. I think I can narrow it down to: 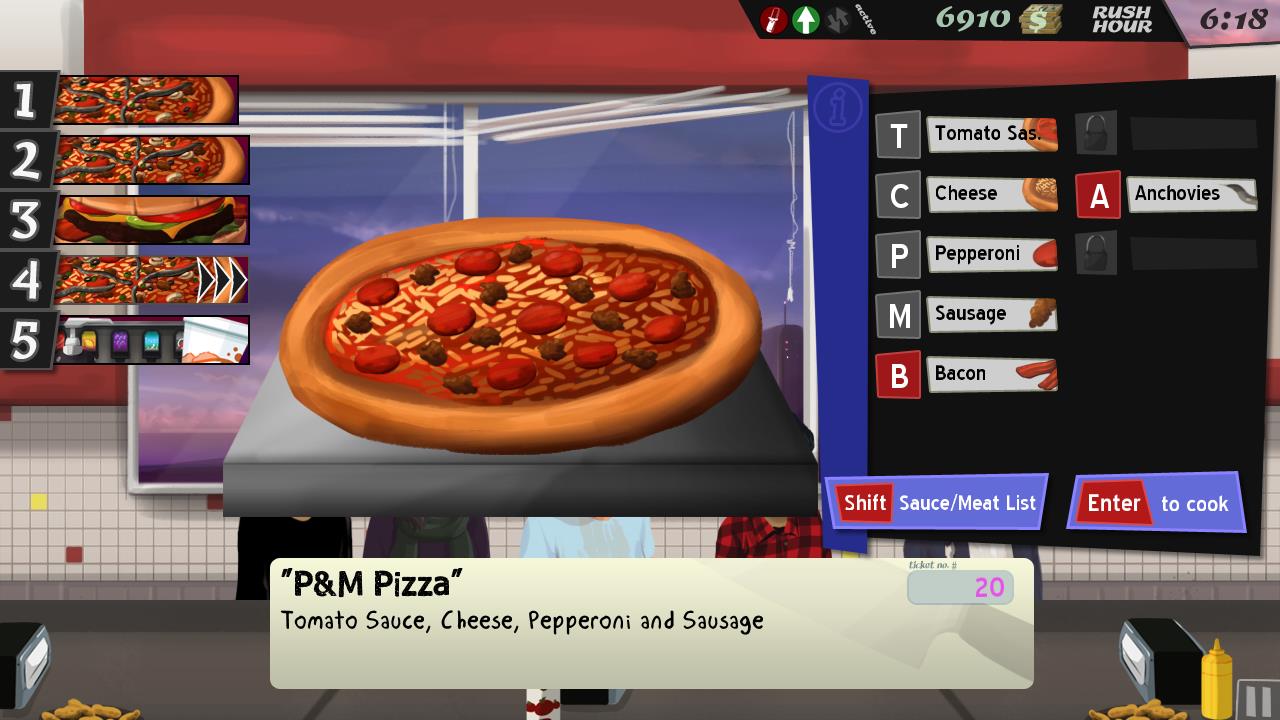 Cook, Serve, Delicious! was a simple game where you would buy foods and upgrades for your restaurant, plan out what would be served on that day, and then play about an eight-minute run where you serve customers food by typing out ingredients via the keyboard according to the recipe, all while also keeping up with the chores of the restaurant and dealing with special events like robberies and health inspections. As you kept playing, your restaurant would get upgraded from zero stars to the five stars at the end.

CSD 1 came out in 2013, around the time the last few batches of Steam Greenlight games were being approved for release. It was the last year of being able to have a breakout indie hit thanks in part to more limited curation of games on Steam- though it did help that my game was already selling well outside of Steam thanks to a Giant Bomb Quick Look video that helped the game find an audience. It was also the last few years of Humble Bundles being major news with each new bundle, and the industry as a whole was transitioning to allow for more devs to release games easily on Steam and other platforms including console.

It was because of this solid foundation of CSD 1 selling nearly a million copies across Steam and Humble Bundles that allowed for me to build a sequel- one that wouldn’t be burdened by the limited budget and time I had before. What I didn’t realize is how much of an issue that would turn out to be. 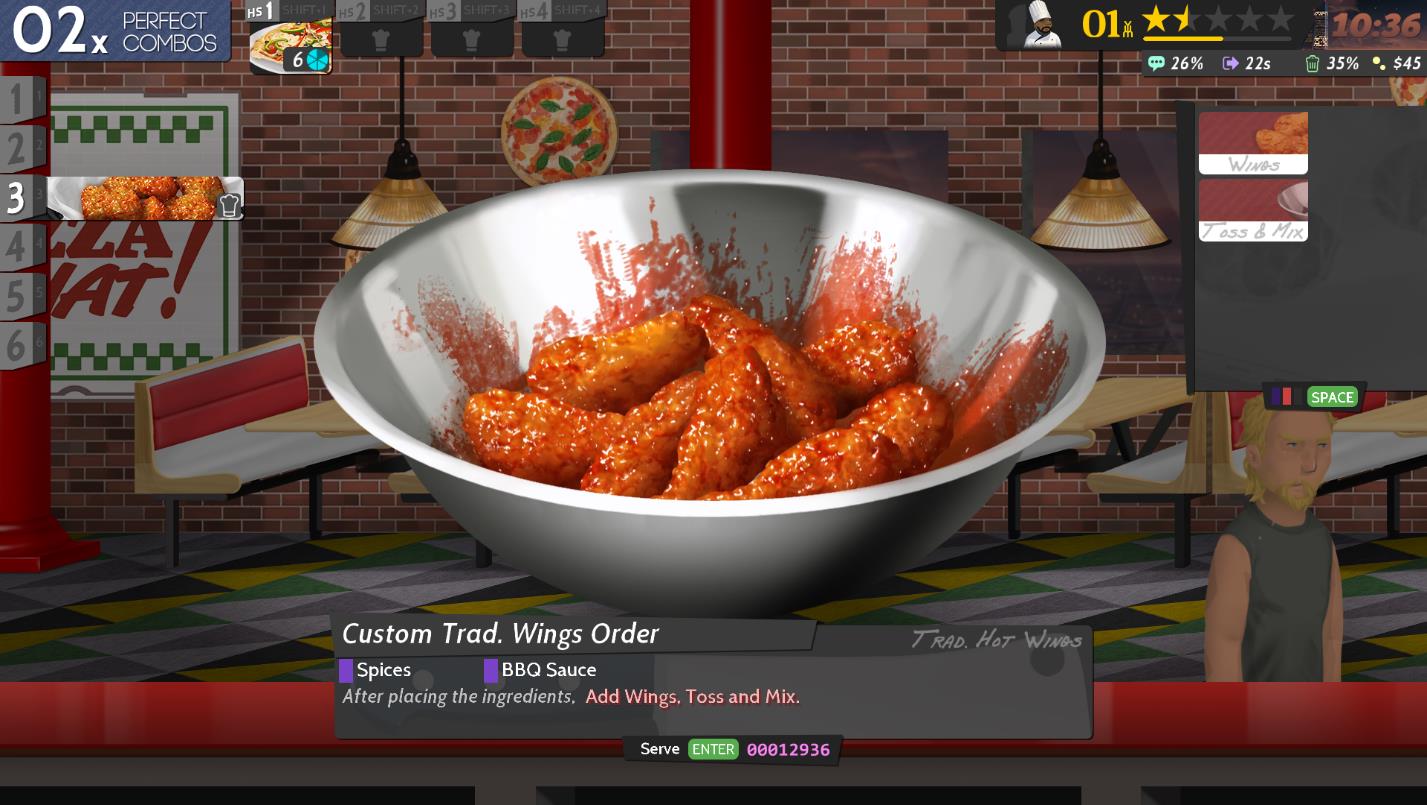 There was a lot of constraints to CSD 1: I didn’t get to put many foods in the game, I didn’t have the budget to give the player a lot of variety. With CSD 2 I had triple the budget to do whatever I wanted. I knew what the players wanted out of a sequel.

And that is one of the key issues that I had no idea I was running into: I thought I knew what they wanted. CSD 2 was not built around the idea of what I wanted to make or design- it was what I thought people wanted.

One of the biggest issues developers can have with making a sequel is not understanding why the first game found the success it did, or why it didn’t. One of the danger signs that I should have paid attention to was that I couldn’t explain why CSD 1 was so popular, or why it was getting so many good reviews. All I could think of when I saw those good reviews was, well if you think that was good, I can easily triple the content in the sequel and make it that much better. This lead to a fundamental misunderstanding of my audience- I assumed they didn’t want just another retread of the same game, and wanted tons more content than the first game ever could deliver. And while that leads to several solid reviews (the game currently sits at an 89% rating on Steam), it did not meet my expectations of what a blockbuster sequel should be. 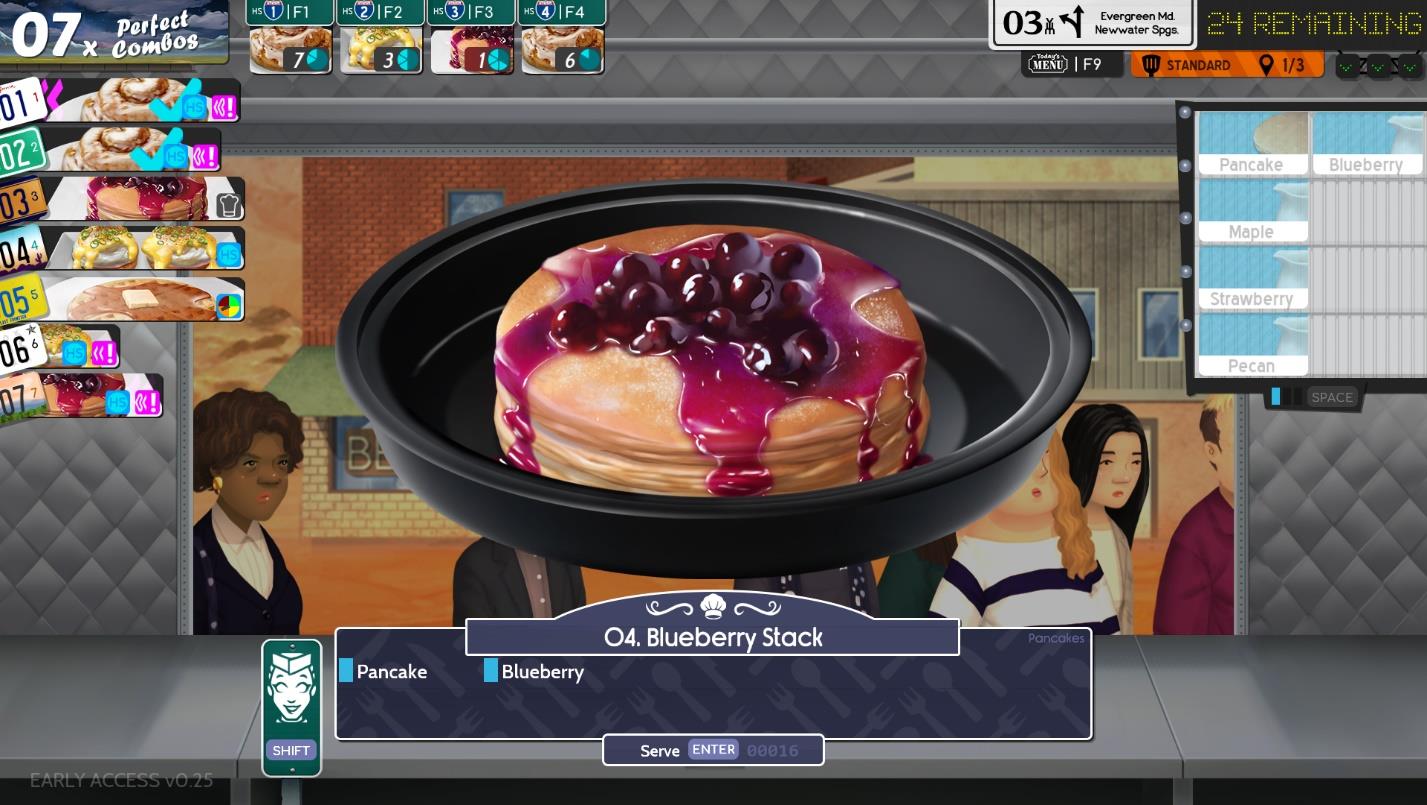 CSD 3 did not start as anything other than a business plan. I looked at all the content that I had created for CSD 2, realized that many players saw only half of the content if that, and knew I could create a third game with a majority of the base being from the second game.
The idea of working on a third game in the series was also depressing from a creative standpoint- I had taken the series as far as I could go. What else could I really do? So I was faced with two different kinds of problems- creative drought and a surplus of content from CSD 2 that was begging to be reused. From a business perspective CSD 3 was a must-do, as I could do it for cheap. But where to take it?

There are, I think, fundamental rules for a third game in a series that is not a AAA title:

With all of this in mind, I estimated that the game would sell only half as much as the second, even if we blew away the player’s expectations. This gave me a bit of freedom to do basically whatever I wanted- if the series was going to end on CSD 3, and it was already going to be difficult to get new players on board, why not go nuts and try something completely new, yet familiar?

And so I threw out a ton of the dynamics from CSD 2, and for the first time in the series changed the way the game was played. Tons of gameplay features from 1 and 2 were cut. A new gameplay flow was created from the idea of a food truck setting. New features were added that dynamically changed the game. I was going all out, and it was a heck of a lot of fun. If the series was going to flame out on the third entry, it wouldn’t be for a lack of me trying to make something new.

It’s still too early to say how sales will shake out- so far we’ve been hitting all our estimates, and CSD 2 continues to perform above expectations on consoles, which gives us a good feeling about CSD 3’s launch (as it’s still in Early Access on Steam). What I can say is the initial feedback has been stellar- we have a 98% Overwhelmingly Positive rating on Steam as of now, higher than the previous two titles, something I would have thought impossible. I still can’t believe it. 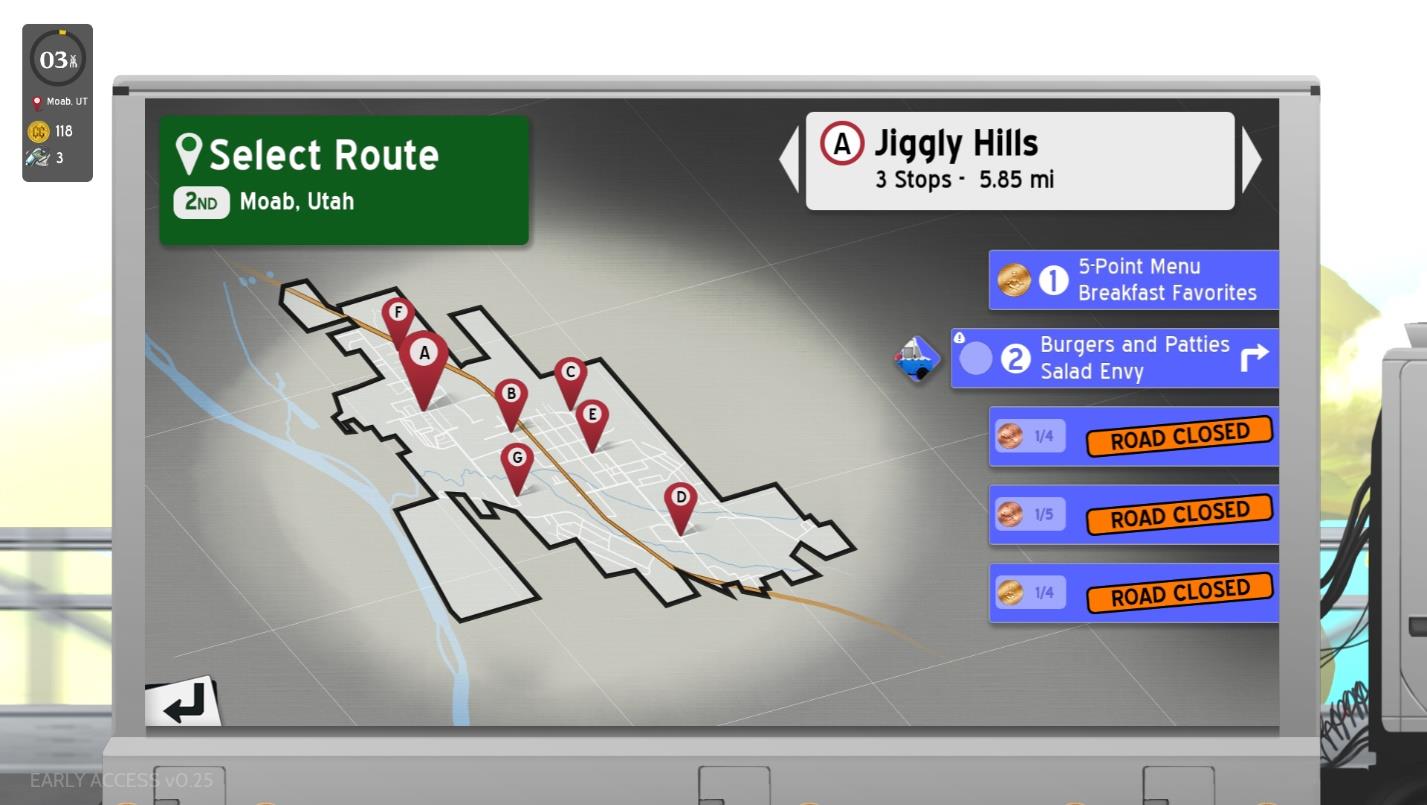 HOW DO YOU COUNT TO THREE?

The first step is to create that sequel, but keep in mind:

So, did you release that sequel? Good for you! Now should we go for a trilogy? 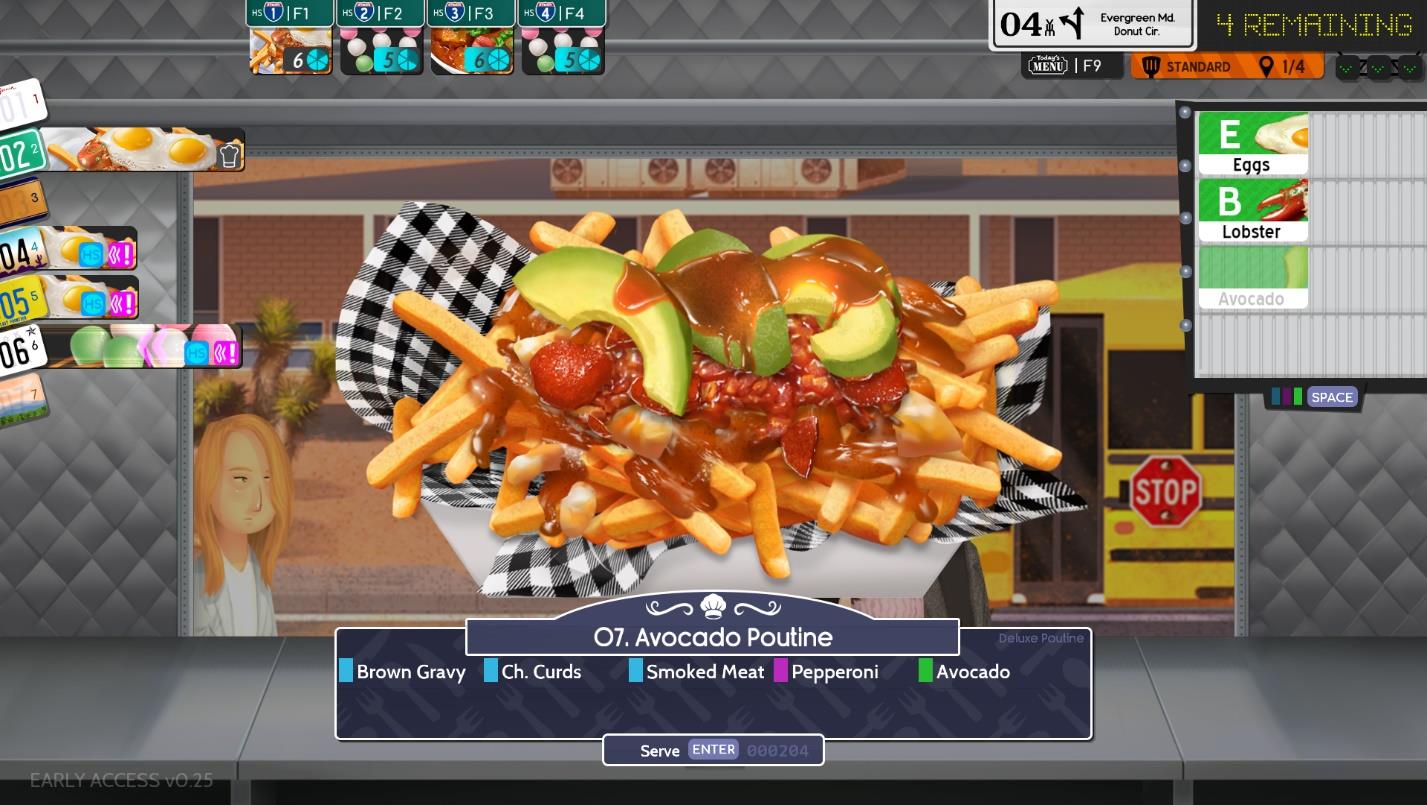 There are instances where I think a sequel might not be the best route. If your first game wasn’t well received it may be better to try and update that game with new features and content until you can get your review score back up. Building a great community is so important as discovery gets harder and harder with so much competition.

You should also be cautious with making a sequel to a game that is older than 3-4 years. Rogue Legacy 2 was an exciting announcement, but with all of the rogue-likes coming out since the original’s release, it will take a tremendous amount of work to reclaim the throne of one of the best roguelikes out there. Imagine if RL 2 came out much closer to the original release- there would be fewer expectations due to competition and would have been an easier sell.

Ultimately I think you will know best whether your game idea meets the merits of a full-fledged sequel, a subtitled sequel, or even some free DLC.

I will say, the feeling of working on a sequel and having the big numbered reveal for fans of the first game, is like no other feeling. It takes a lot to meet those expectations, but if you can do it, you’ll achieve a kind of game dev bliss that is almost unexplainable. It’s not easy, and sometimes not fun to be locked into a game style for years at a time…but if you can get through those hurdles, you’ll experience the joys of having a franchise, and what it can bring you, in the years to come.