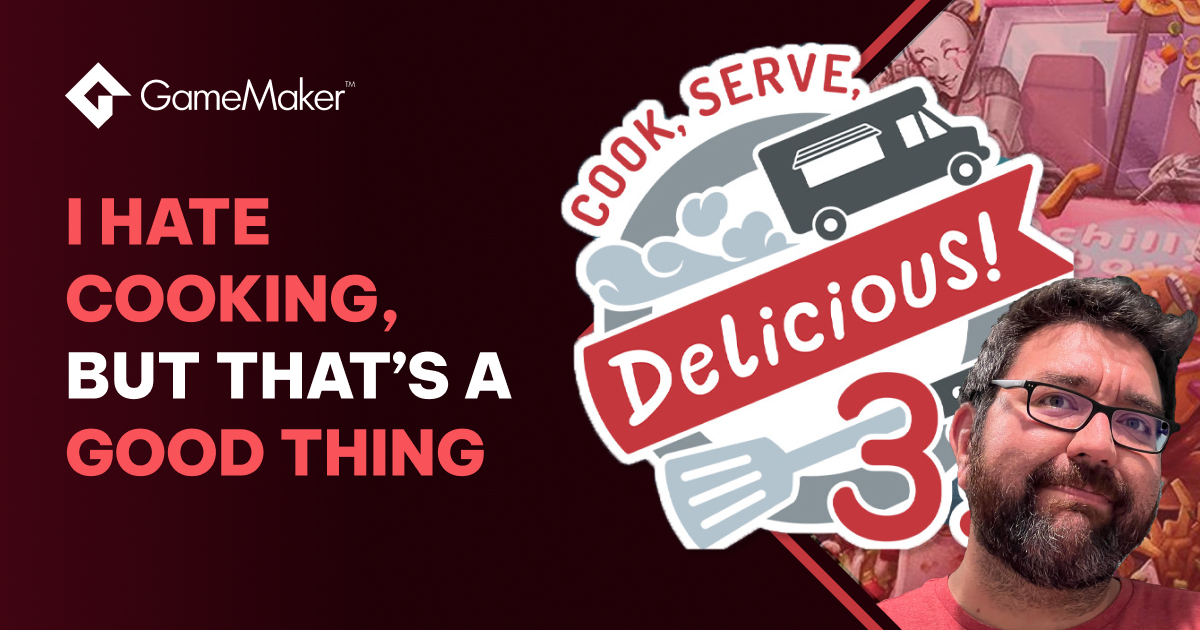 David Galindo has been a professional game developer for over 10 years, and is currently the head of Vertigo Gaming Inc.

His popular series, Cook, Serve, Delicious! has won the hearts (and stomachs) of millions players worldwide, leaving them hungry for the upcoming fourth instalment of this culinary saga, Cook, Serve, Forever.

During our interview, we asked David how he got started in game development, creative burnout, and his dislike of cooking!

Why did you decide to become a game developer?

I never did figure out how to make that game, but from there I branched out and started making a lot of stuff.

Was GameMaker your first engine?

Yes. It’s really been the only one I’ve used, and I learned coding through GameMaker.

I first started with GameMaker Visual, and then eventually graduated into GameMaker Language. I was never good at it, but good enough. It’s only been recently that I was able to hire a full-time programmer, and now I’m able to just do full time game design, which is my real passion.

How do you approach game design?

It comes around to what are the things I want to play that I don’t see a lot of. 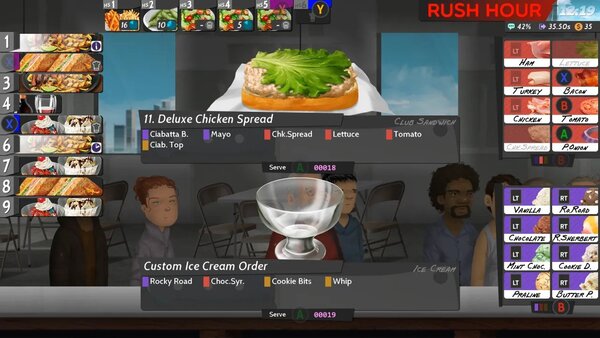 Do you think the world of game development needs this pursuit of innovation?

Yes. I do like refinement of older gameplay concepts, but you could end up hitting a wall if you try to take ideas as far as you can.

For example, in Cook, Serve, Delicious! 3, we’ve taken the concept of incoming orders and gameplay dynamics as far as we can, and now anything more wouldn’t feel very new - we’d overcomplicate things. We had to consider how do we get a new audience, but also maintain the interest of people who loved our games for so long? And that’s a challenge.

When I was researching the games you’d made, the one that stood out to me was Chef Squad. I’ve never really seen a Twitch chat-based game.

I’m very proud of Chef Squad. That’s something that no-one’s ever really attempted before, and we were able to pull it off so well. I didn’t expect it to work, and it totally does.

Chef Squad is about cooking with your Twitch chat and trying to get a perfect day. It sounds a lot like Cook, Serve, Delicious! but the dynamics are different.

Twitch has always fascinated me. It feels like a frontier that gaming either ignores or barely pays any attention to. There’s so much potential there, but it’s hard because it's challenging to make revenue off of it.

We had to release Chef Squad for free because we couldn’t figure out the financial aspect of it, and we didn’t want to compound the already difficult nature of the game.

How would you describe Cook, Serve, Delicious! to someone who’s never played it?

It is a casual cooking sim that’s not overly casual. It looks very simple, especially the first game, but as you dig into it, it gets more and more complex, and it gradually acclimates the player to this cooking experience.

At the time when we first released our game, there weren't a whole lot of cooking games available. In a way, we were the first ones out of the gate to make what we called a hardcore cooking sim. 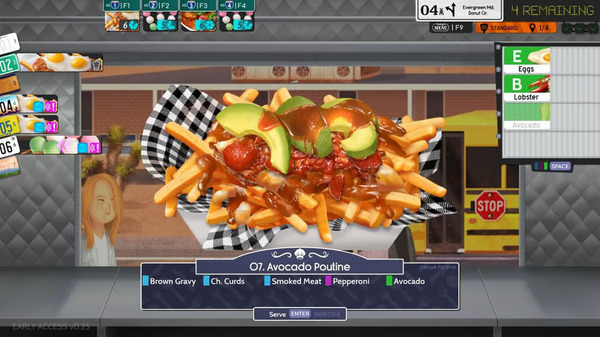 Avocado Poutine, one of the dishes available in Cook, Serve, Delicious! 3!!!

What inspired you to make a cooking sim?

A game called Ore No Ryouri. It was available on the PlayStation 1 demo disc. It was just a demo, but I loved the core concept of cooking in that game. I made two fan games based on Ore no Ryouri, until I finally made my own spin-off, Cook, Serve, Delicious!.

What makes Cook, Serve, Delicious! stand out from other cooking games?

The way orders arrive and the player having to juggle it around very fast.

Each game is very different, and it was always fun to balance making a tense fast-paced simulator for people who want a challenge, and a very casual zen mode for those that just want to relax and make French fries all day.

Have you ever worked in the food service industry?

Yes, I was a barista for many years. A lot of that difficulty and frustration and stuff in the game culminated from my job.

I did not like it, it was very, very stressful, and you get a lot of that in the game too. 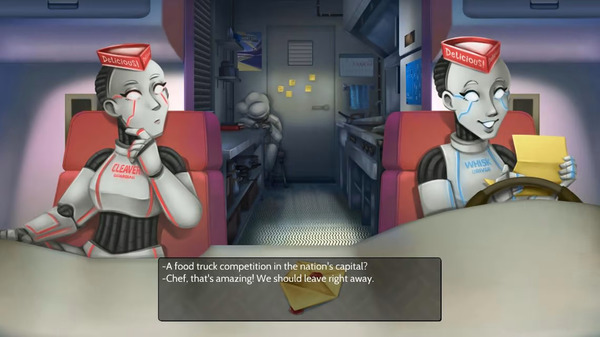 A cutscene from Cook, Serve, Delicious! 3!!!

Why did you decide to set up the third game in your series in a dystopian future?

When we made Cook, Serve, Delicious! 2!!, the intention was always that it was the last game and we weren’t going to make the third one.

It has an email system in there, which you can read or choose to ignore, referencing things that were happening outside of your tower, like end-of-world kind of events. The game itself never showed you that side of the world. You were in the tower, you were cooking, and everything’s cool.

When we decided to make the third game I thought, well gosh, we already set up this world outside the tower. Let’s literally dive into it!

It was very fun, and surprising for a lot of people, but those who really got into the lore of Cook, Serve, Delicious! 2!! were excited for a different reason - they finally got to see everything they read about.

And it was also me living through the more exaggerated worldview that I have, like trying to make these snacks in my food truck while the world is falling apart around me, because what else can you do, really? You just try not to think about it and try to live your life. And that was a very fun way of making the game, for sure.

Which one of  the recipes in Cook, Serve, Delicious! series is your favourite food?

Mine are actually boring. I love pizza, and burgers.

I do love okonomiyaki. I’ve only had that little bit, but that was something that the head of Zacktronics, made for me when I was visiting him in Seattle. 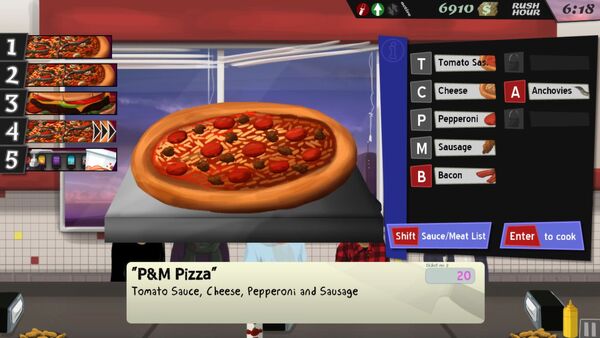 Where do all the recipes come from?

A lot of them come from my own experience with cooking. A lot of people wanted more foods from around the world, because it was very limited to North America in Cook, Serve, Delicious! 2!!. I wanted to research a bunch of different ethnicities and foods.

There were some things that we didn’t get quite right and ended up having to go patch. For example, I’d read an Americanised version of a recipe from the Middle East and present it as a Middle Eastern food, and that was a mistake.

I wish I ‘d brought in some experts that had first-hand experience, but thankfully I learned all that before the game launched, because we had a lot of beta testers.

Do you enjoy cooking yourself?

I don’t, I hate cooking!

I take that as a good thing, because it allows me to not fret about not getting the cooking experience correct all the way. There are some things that we fudge to make the game playable. If I was a big snooty chef I could say “Well, you can’t put the oil after you put the chicken on the skillet, you just can’t do that”, while my programmer senses tell me, “I have to do that, because that’s the easiest thing to do, and I don’t want to spend days reversing that”.

I’ve certainly learned how to cook. I still don’t like it, but I love watching MasterChef and playing other cooking games - anything that revolves around me not cooking personally.

Why did you choose GameMaker?

I love how fast you can build in it. It shaves our development time by the year, practically, just because you can get something up and going in weeks or days.

The game we’re making now only had about three full months of programming, if that, and it already looks really great because of GameMaker’s speedy cross-platform development. We’re able to compress our schedule down so tightly that we’re entering a phase where I’m hoping to get one game out a year, without any crunching. 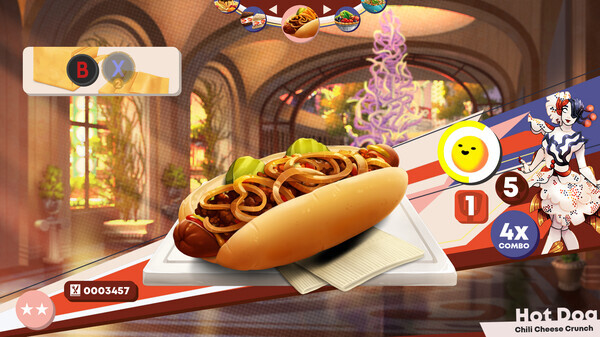 Chili Cheese Crunch Hot Dog, one of the dishes the players will be able to make in the upcoming Cook, Serve, Forever

I wish it had a larger user base, because when I started getting into PlayStation 4 development, Sony had large forums for Unity and for Unreal, and the one for GameMaker was only me and two other people.

Whenever I would have problems, I’d go straight to the GameMaker devs and ask them about it, and they would patch the tool directly.

I hope GameMaker gets bigger and bigger, and people recognise how much they can accomplish by using it.

What do you find most challenging about leading an indie game studio?

It’s challenging not to work all day everyday, because I know if I don’t manage time appropriately, that could also possibly pass on to my employees. I have to force myself to make time to relax.

Last year, I would mark every day that I worked in the calendar, and looking back at that whole year, the only time I wasn’t working was when I was in the hospital with an emergency gallbladder surgery. It was a huge eye-opener.

It’s hard to recognise it as crunch because I’ve done it for so long and it’s fun, but that’s how you get burned out. I’m proud that I’ve gotten pretty far with managing that, and I feel better doing it.

Do you have any advice on how to avoid a burnout?

I try to stop working at a specific time, no matter what I’m doing. That and having a checklist of things really helped when I couldn’t even get myself to work, because I was so lost.

I always found making a checklist helped, especially when starting a new project, and when I say a checklist, it’s really a checklist of anything you can think of. I would even put lunch on the checklist, or five-minute breaks. I’d be checking tasks off, and every day it felt like an accomplishment.

That really helped. Otherwise it was so hard to structure myself, and by doing that, even if it was a day where I maybe got 30 minutes of actual work done, it felt like I still did a lot. 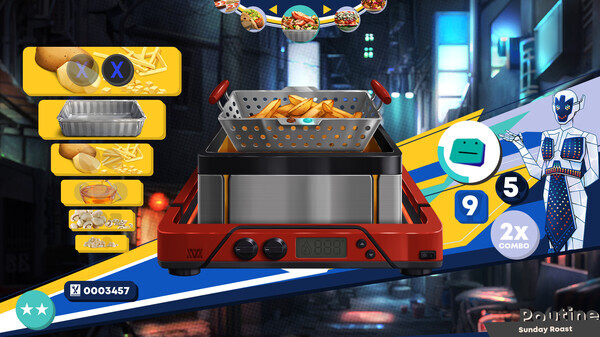 Whose disapproval would hurt you more - that of the cooking game icon, Cooking Mama or the master chef Gordon Ramsey?

If anything, I’ve been disappointed in Cooking Mama and her games lately. But Ramsey? I would love and also be sad to hear his disapproval.