Stalk Prey, Raise Kittens and Have a Nap - Cattails 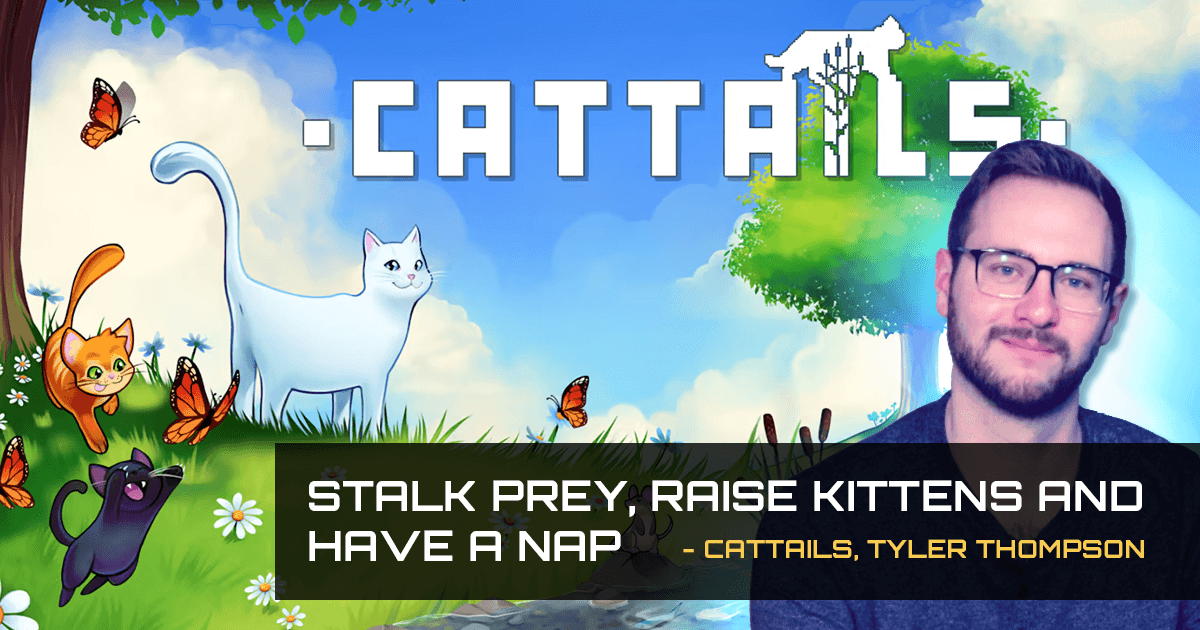 Tyler Thompson is the 27-year-old founder of Falcon Development, a small studio consisting of himself, his wife Beka and three pets.

With the release of the smash-hit cat sim Cattails in 2017, Tyler became a full-time dev and is currently working on the sequel to his game Cattails: Wildwood Story, launching in late 2023 on Steam. The game's Kickstarter campaign launched in May 2022, and was fully funded in less than two hours!

We asked Tyler about his journey as a game developer and what inspired him to create Cattails. Most importantly, we even found time to trade cat pictures. 🐱

How did you become a game developer?

It all began when my brother and I received an NES for Christmas. After playing through Super Mario Bros and Super Mario Bros 3 one too many times, we pulled out a big roll of graph paper and began to sketch our own original level concepts for Mario to navigate.

A month later, we stumbled upon a piece of freeware software that was someone's attempt to recreate Super Mario Bros for the PC. It was mind-blowing to see an individual create a whole video game like that, and we wanted to know how to make one for ourselves. 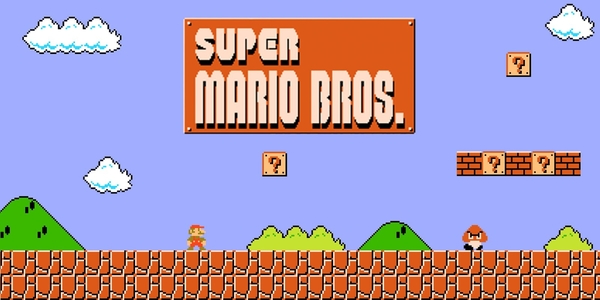 How did you find about GameMaker?

I found GameMaker through one of those splash loading screen ads that used to show on projects compiled with the free version of GameMaker 5 or 6. All throughout middle school and high school I would come home, open up GameMaker, and fiddle around with the program for an hour or two to see what I could create.

What do you think about it?

On the whole my experience with GameMaker has been largely positive. The program has grown alongside me at an almost perfect pace, going from a hobby tool to the professional powerhouse it is today. The mere concept of console exports from GameMaker would have blown my mind as a kid.

If I had to narrow in on one gripe, I'd say that the image editor in GameMaker Studio 1 had some really useful features that I used all the time that have not been added back into GameMaker Studio 2 (Colorise, anyone?). Of course there's plenty of new features in the new image editor and on the whole I'd say it's an improvement, but I miss those old tools dearly.

What's the biggest challenge you face as an indie dev?

The uncertainty of it all! Independent game developers are really reliant on platform holders to set the rules and provide the playing field where we can earn a living.

It can be frustrating when things seemingly change overnight, but you learn to roll with the punches as they happen. Sometimes the changes are good, so you have to be able to adapt quickly if you want to thrive in this environment. Also, it can be agonizing when you're working on a long-form project that for one reason or another you just can't share yet, because putting your work out there is the quickest way of knowing whether your idea is viable or not. 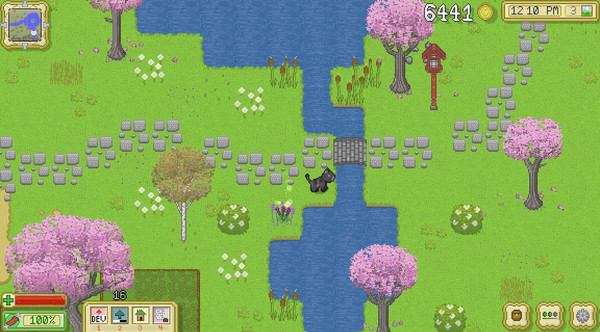 It’s a cozy life simulation game, in which you are a part of a cat colony.  Stalk prey to find food, defend your new home from dark intruders, and discover fresh herbs and ancient treasures. Build a thriving town for all cats to call home. Get to know the residents, fall in love, and raise a litter of kittens!

What was your inspiration for creating Cattails?

There's possibly no video game franchise that I spent more time with as a child than the early Harvest Moon titles. I spent countless hours with Harvest Moon: Friends of Mineral Town and Harvest Moon: A Wonderful Life.

When I was young, I tried to create some GameMaker projects that shared features with these games, but quickly learned that games like these are very complex beasts and take a long time to put together. Discouraged, I moved on to other genres that could be more readily recreated in a couple weeks or months.

Yet you didn’t give up, did you?

Nope! In college, while studying Computer Science, I watched some truly incredible solo developers launch their games. I had been casually following the development of Stardew Valley for years, so when the game released I quickly jumped in and was immediately transported back to those early days of playing Harvest Moon as a kid. 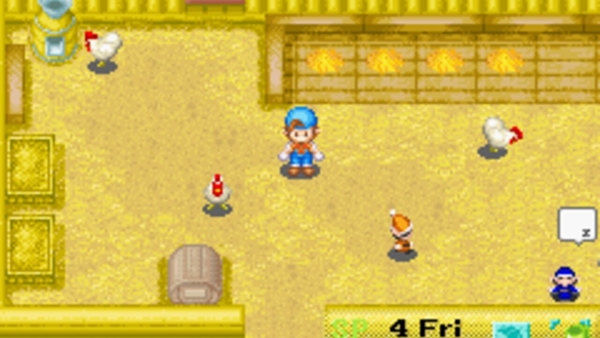 Was there another game series, save for Harvest Moon, that inspired you to keep going?

I remember watching my wife play through Undertale and being completely blown away by it. Inspired, I decided to try my best to emulate the success of so many game developers who paved the way before me and to make my own title with my newly-learned professional skills.

What is the message Cattails tries to convey?

At its core, Cattails is all about relationships. Friendships formed between once-strangers, trust shared by colony-mates, and romance born from adversity. There's something about the concept of community that we all need on a deep, human level, even in a game about cats!

We directly tied the progress in the game and several important bonuses and benefits to the player’s ability to be kind to the members of your cat colony. Even the ones that seem cranky or downright unlikeable from the start have redeeming qualities, and it will be well worth your time to get to know them.

Being a creator of a cat simulator, do you have a cat yourself?

Yes, I have two! This is Elli (calico) and Peanut Buttercup (tortoiseshell). Both are rescues from our local cat café. We've naturally learned a lot about cat behavior by studying these two closely, and I couldn't resist the temptation to put them both into our upcoming game. 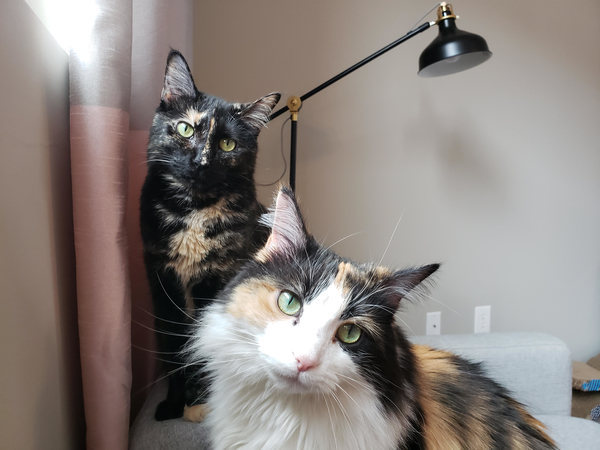 Can you tell us a little more about your upcoming game?

Absolutely! Cattails: Wildwood Story is a single-player life simulation game that includes elements borrowed from the RPG, survival, and dating sim genres. It is the standalone sequel to Cattails (2017). The Kickstarter campaign for the game launched May 10, and if it sounds interesting to you, you can visit the Kickstarter page and wishlist the game on Steam.

How similar will it be to the original Cattails?

Cattails: Wildwood Story plays a lot like the earlier title in the series. However, we are taking steps to innovate and improve the experience in every way possible.  We've started from scratch, rewriting the codebase, creating new art, commissioning an all-new soundtrack, and much more. We hope to create a familiar atmosphere for those who love the cozy, chill vibes of Cattails (2017) while also offering plenty of new experiences and surprises along the way!

Do you have any tips on how to run a successful Kickstarter campaign?

I've run one campaign before for the original Cattails in 2017, so this time around I hope that my lived experience will help inform my decisions. For any other game developers considering running a crowdfunding campaign, please start early! The more time you have to get things ready the better.

When the campaign actually starts and that clock starts ticking down everything gets really serious really quick. Last time around, I had exactly one month of prep. This time, I got a head start and began in August. I've been preparing for months now and hopefully that preparation will pay off. 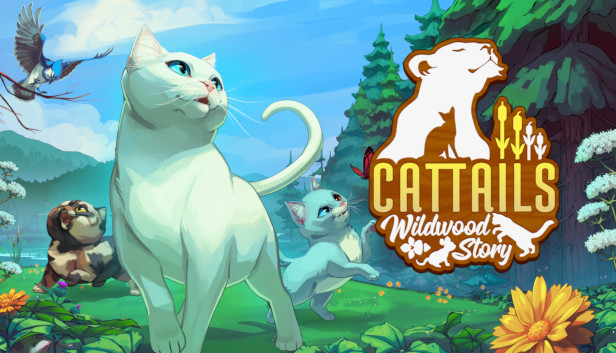 What will you do after you’re done with Cattails: Wildwood Story?

I'll continue to make games in some form or another for a very long time. I started when I was ten and I haven't stopped since, so this is probably going to always be an important part of my life.

Is there a piece of advice you wish someone shared with you, before you became a full-time game developer?

Every time you come across a problem that it seems like you can't solve, try anyways. It's OK if you fail. You'll almost certainly learn something valuable along the way, and it might not be at all what you expected to learn. Do that enough times, and you'll probably discover the solution. You have so much time to learn and grow and figure out new things, especially if you're starting young. That's a wonderful asset. Learning a new skill takes time and effort, but you'll get there if you stick with it!

Who is your favourite Cattails character?

Oh no, this is like picking your favourite child! I love all of them equally, of course, but if I had to pick just one I'd have to go with Krampy. There's something about that quirky cat in a wooden plague doctor mask that's endlessly endearing. Kudos to my buddy and former roommate Dan for coming up with the concept. 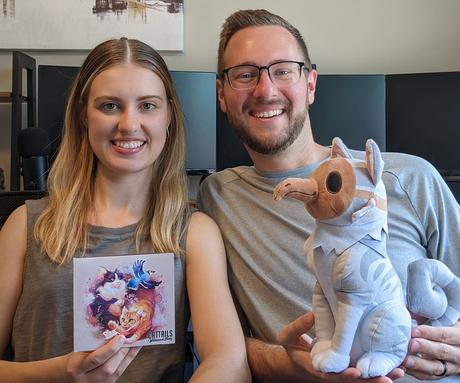 It took less than two hours for over a thousand cat-fanatic backers to fully fund the Cattails Kickstarter. The campaign is still live and accepting contributions for its stretch goals if you'd like to be part of Cattails' journey.

Speaking to GameMaker after our interview, Tyler said:

"GameMaker has been a huge part of my life and allowed me to follow my dreams and pursue indie game creation for the past five years. Thank you for providing such an amazing tool!"

If you're looking to crowdfund your own video game, check out our comprehensive guide to running a successful gaming Kickstarter campaign.