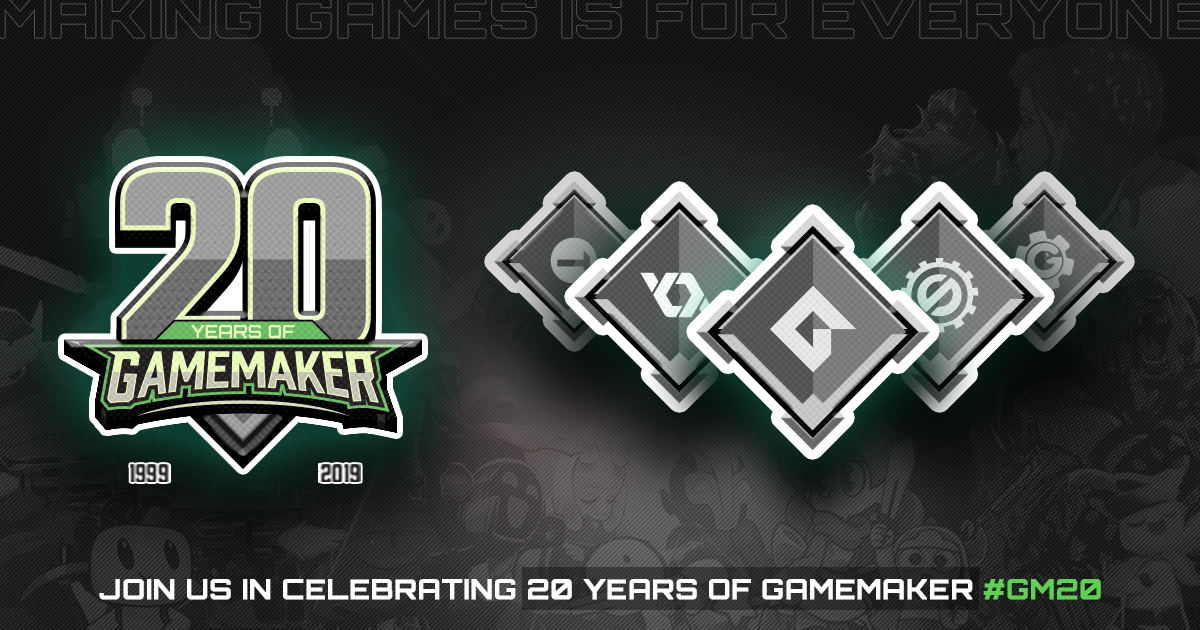 YOYO GAMES CELEBRATES 20 YEARS OF GAMEMAKER WITH OUR COMMUNITY

Friday, November 15th, GameMaker celebrates its 20th Anniversary. In honour of the occasion, we are preparing a number of events for new and existing GameMaker creators, including a GameMaker 20th Birthday Game Jam, a special one day anniversary sale, and the announcement of the impending open beta release of 2.3, GML updates and sequences for GameMaker Studio 2, that will offer game creators even more tools to bring their vision to life.

This weekend, running until Thursday 21st November, we are hosting the GameMaker 20th Birthday Game Jam. The theme of the Game Jam is the number 20, meaning the challenge could be to create something in 20 hours, or with 20 lines of code, or at a resolution of 20x20px. The GameMaker 20th Birthday Game Jam is open to anyone, whether they are a huge team or a solo creator. The YoYo Games office will even be taking part! GameMaker Studio 2 will also be available for free to use on the game jam throughout the jam, so anyone can get involved with the Game Jam, regardless of whether or not they already own a licence. Sign up and get involved here: https://itch.io/jam/gamemaker-20

“We are so happy to be celebrating the 20th Anniversary of GameMaker with our community. In the games technology world, 20 years is a lifetime” said Stuart Poole, YoYo Games’ General Manager. “It’s a very important milestone for the engine, which has continued to lead the field in 2D game design, offering creators the most powerful and user-friendly 2D game development environment in the industry. We are so proud of what GameMaker has achieved thus far and even more excited about its future.”

We have also been hard at work preparing some amazing updates for GameMaker Studio 2. Version 2.3 including Sequences and the big GML updates are due to reach open Beta before the end of the year, with plans for a full launch in Spring 2020. Sequences enables fast creation of complex cutscenes along with simple GUI-based manipulation of animations and audio, all of which can be positioned or context-triggered to occur discretely anywhere within the game. In short, the already simple-to-use interface of GameMaker Studio 2 is becoming even more powerful, allowing advanced development tricks to be done with little to no coding.

“The ease of control and iteration that Sequences will provide to GameMaker users is going to drastically improve game development workflow for Indie studios, and we expect it to lead to a paradigm shift in GameMaker game aesthetics,” said Russell Kay, CTO of YoYo Games. “This is the first of many changes that we have in the pipeline, that will make 2D GameMaker games stand out for their beauty while retaining GameMaker’s essential simplicity and capability to support rapid multi-platform development. We can’t wait to see what our community does with it."

Over the last 20 years, GameMaker has become synonymous with 2D game development, offering creators the most intuitive, easy to learn, yet powerful 2D game creation suite in the world. GameMaker Studio 2, the latest iteration of GM, allows for incredible flexibility when creating for multiple platforms, with a single code base giving developers the ability to run their creations natively across PC, Mac, Mobile, HTML5 and consoles.

GameMaker has allowed indie developers to bring their vision to life, with titles such as Nidhogg 2, Minit, Hyper Light Drifter, Spelunky, Downwell, Nuclear Throne, Gunpoint and Undertale and so many more amazing games. As we celebrate the last 20 years of this game creation suite - having been originally released in 1999 by Computer Science teacher Mark Overmars, before growing rapidly and being acquired by YoYo Games in 2007 - we are looking forward to the future of what GameMaker can do for more creators looking to enter into game development.