How Long Does It Take To Make A Video Game? 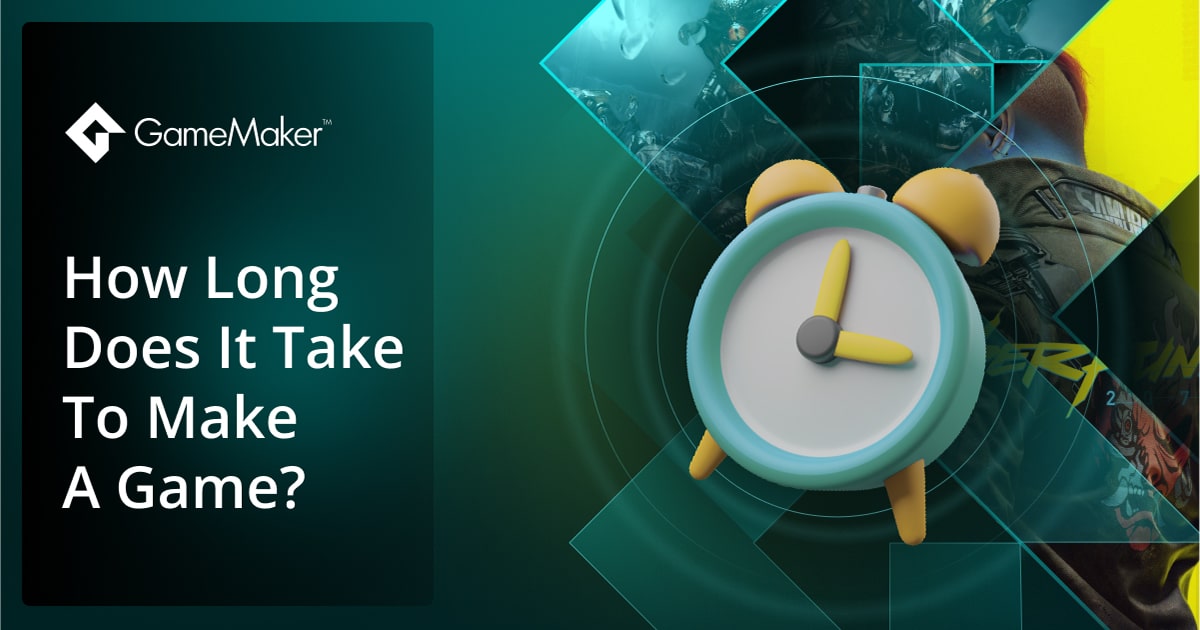 The time it takes to develop a video game is never cut and dried. If you’re hoping to hear a definitive “it takes six weeks” type of answer to the question, prepare for disappointment.

Some games, like our very own Hero’s Trail tutorial, can be created in as little as 30 minutes. Others have taken 15 years, which in Duke Nukem Forever’s case was absolutely not worth the wait.

Everything from development costs, your choice of game engine, and even the game’s art style can affect the development times of AAA (Triple A), mobile, and indie games. 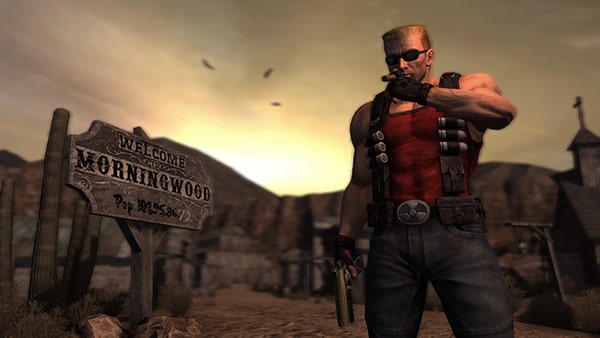 How long does it take to make an indie game?

Creating an indie game can take anywhere between a matter of days and a number of years.

With indie games, coding experience and budget will be the biggest influences on a game’s development cycle.

Here’s a few examples of quality indie games all made within vastly different timeframes:

How long does it take to make a video game by yourself?

You’re quickly going to tire of hearing this, but the simple answer is, “it depends”.

If you’re after an example of an indie game developed by one person, look no further than Stardew Valley. It took Eric “ConcernedApe” Barone an impressively short four years to create his RPG farm simulator all by his lonesome.

The first version of Minecraft - one of the most popular indie games ever - took Markus Persson a mere six days to create. The game was declared “complete” after two years of additional updates. 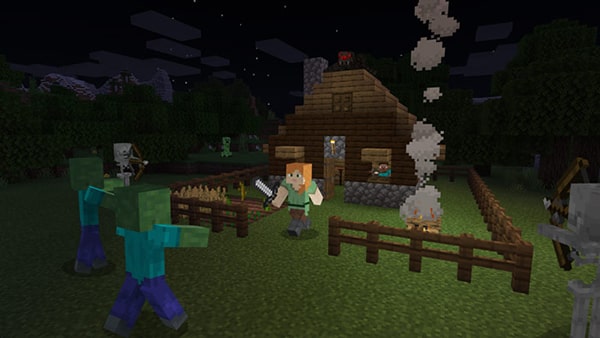 How long does it take to make a AAA game?

AAA publishers need to make sure development cycles are as short as possible to make the highest profit - and if there’s one thing we know about AAA publishers, they love to make a profit.

Even though these types of games are backed by multi-million dollar development budgets, AAA games can take up to five years or more to make.

Take a game like Grand Theft Auto V: everything from the thousands of road signs we all recklessly ignore right down to the Ghost of Mount Gordo had to be pitched, designed, and placed by someone.

Series like GTA, Persona, and The Legend of Zelda are known for long gaps between each new game, whereas Call of Duty and Assassin’s Creed see annual releases.

With Call of Duty, publishers Activision hire multiple studios to work on new entries years in advance to guarantee games are ready to publish ahead of their strict holiday deadlines. 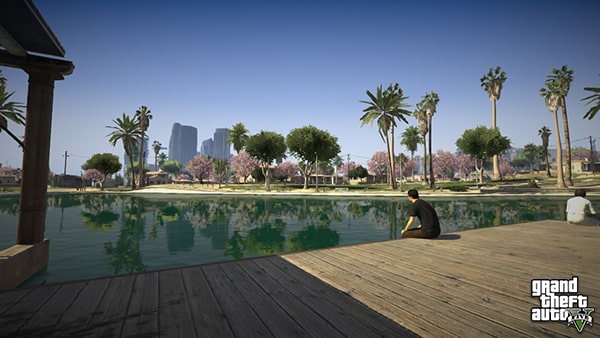 How long does it take to make a mobile game?

Depending on what kind of mobile game you’re making, development cycles are usually measured in weeks and months, but they have been known to take far longer.

It took two years for developer Niantic to turn Pokémon Go from an April Fools joke on Google Maps into the most popular mobile game of all time. Much of Pokémon Go is based on another of Niantic’s augmented reality games, Ingress.

At the other end of the spectrum, mobile gaming classic Temple Run only took four months to develop. Not bad for a game that’s gone on to make over $1m in revenue.

Why do video games take so long to make?

A number of factors can affect how long it takes to make an indie game:

With AAA games, anything from company takeovers to global pandemics can influence development times.

Even when development cycles aren’t being hampered by acts of God, AAA games are large, detailed, complicated projects. You could put the best game developers in the world in a room together and it could still take three or four years for them to finish a project.

How long does it take to code a video game?

Learning how to code a game isn’t the easiest job in the world, but it still may be easier than you think.

A basic rule of thumb is that the simpler your game is, the less time it takes to code. You only need to compare a sprawling JPRG like Final Fantasy VI to the original Super Mario Bros. to see what we mean.

If you’re new to coding games, keep it simple and crack open those textbooks. If your idea requires a lot of coding, you either need to embrace the challenge or hire someone to handle it for you. 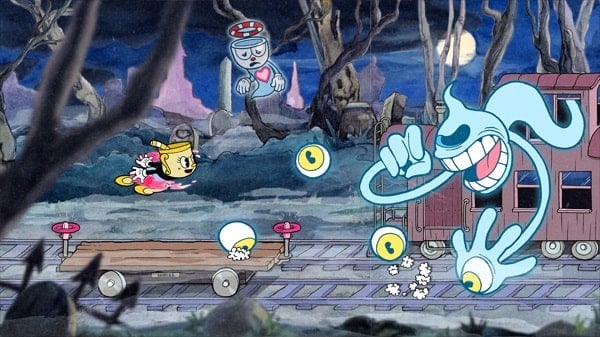 How long does it take to make the art for a video game?

Here’s your polite reminder that Cuphead’s rubber hose animation was the reason it took five years to make. To bring the 1920s art style to life, the team at Studio MDHR had to draw and colour every single one of the game’s 50,000 animation frames.

Fifty. Thousand. Frames. All worth it in the end, but that’s a lot of drawing.

The time it takes to produce art assets can be affected by:

Everything from character models, blood spatters, and tea cups will need to be created by an artist. Unless you decide to download an asset bundle or two, of course.

How long does it take to make sound effects and music for a video game?

Think of all the sound effects in an average game: footsteps, doors, light switches, fall damage, menu open, menu closed, level-up, game over. And sound effects are only the tip of the iceberg.

Factors that can affect the time it takes to make sound effects or music for a game include:

You can save time by downloading audio bundles for the more generic sounds, but if you’re after something bespoke, it could take anywhere between a few minutes and a few months to create or capture all of your audio assets. 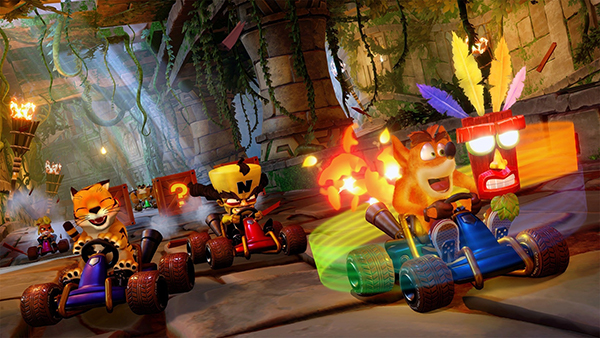 Why do games get delayed?

Video game delays are pretty common these days, but that’s not to say they’re anything new. In the 1980s, a ROM chip shortage forced Nintendo to delay the American release of Zelda II: The Adventure Of Link and Super Mario Bros. 3.

No-one wants to see a game get delayed, but as Shigeru Miyamoto’s famous quote reminds us: “A delayed game is eventually good, but a rushed game is forever bad”.

(As an aside, did you know that Miyamoto probably isn’t the one who originally said that about delayed games? Who knew that quotes circulated on the internet weren’t always accurately sourced?) 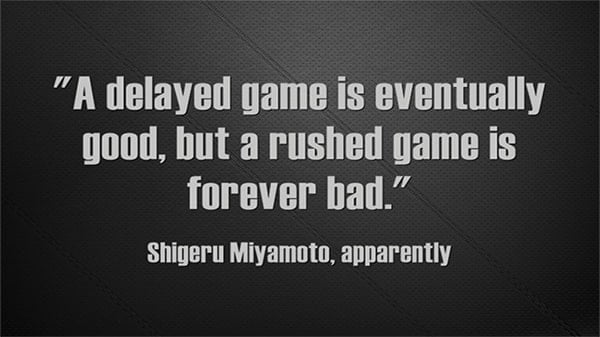 Games can be delayed for a number of reasons, including:

Delaying a game is never an easy decision for developers to make. AAA game releases are usually heavily tied into marketing campaigns and merchandising, which all need to be pushed back if a game is delayed.

For indie developers, delaying a game means more work, higher development costs, and a potential backlash from your community.

It also means more time to fix problems, a higher-quality product, and a happier player base in the long run.

When should a game be delayed?

If it’s clear a game won’t be ready by its intended release date, developers and publishers need to think about delaying it.

Despite pouring millions of dollars into its development, Cyberpunk released with dozens of glitches, bugs, and graphical issues that saw CD Projekt lose over $50m in refund requests alone.

If you’re worried that delaying your game will upset people more than releasing it in its current state, consider the example of Balan Wonderworld. Fans of Yuji Naka’s 3D platformer actually took to social media calling for the game to be delayed after the disastrous launch of its demo.

Balan Company opted for a day-one patch instead of a delay, and the game became an instant commercial flop on release.

Man, @balanwworld, please delay Balan Wonderworld already. It feels like a call for help in its current state.pic.twitter.com/ghZJ3r0iUB

What is development hell?

Development hell is a term used in media and software industries to describe projects that face troubled or chaotic developments.

The difference between a delayed game and a game in development hell comes down to their odds of actually making it to store shelves.

A delayed game simply has its release date bumped back to give the team more time to complete the project. Games in development hell face so many problems that the team can’t even guarantee the game will see the light of day.

Some of the factors that can put a game into development hell include:

Examples of games in development hell

Famous examples of games in development hell include: 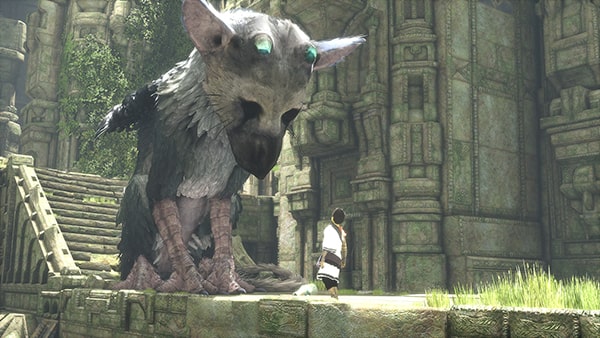 How long it takes to make your own game is hard to judge. Games can be complicated beasts at the best of times, but the type of game you want to make and your level of coding experience can make development cycles even longer.

If you’re new to making games, download GameMaker for free today and get started with our Hero’s Trail tutorial, which can help you make your first game in just half an hour.