Hero's Trail: Create Your Own Action-Adventure Game In 30 Minutes

Hi there! In this tutorial we'll use the Hero's Trail template to create our own action-adventure game. We'll add coins, a sword attack, and the ability to defeat enemies.

We'll customize the project so you can truly make Hero's Trail your own.

At the end, we'll upload our game to GX.games so you can share it with your friends and the rest of the world!

Let's start by creating the project!

We'll use the Hero's Trail template as a starting point for our game. 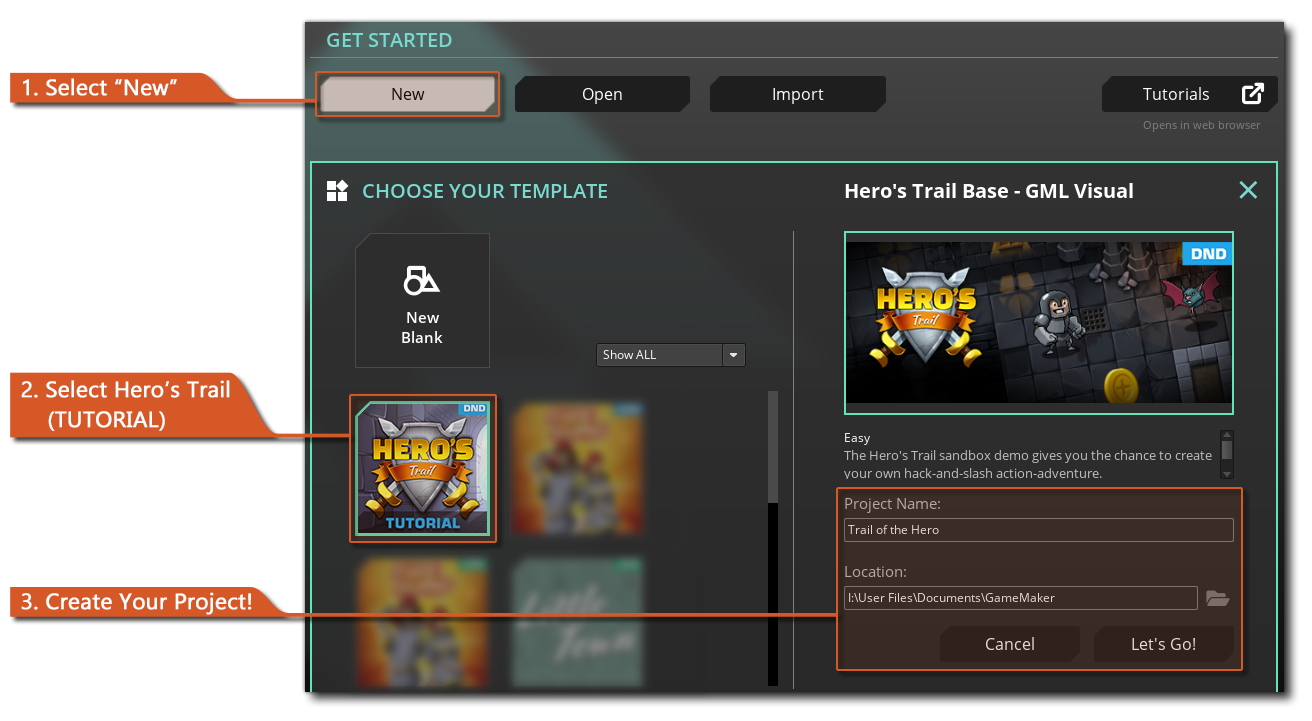 This will open your new project where you can modify the template and play it. To play the game you can click on the

Run button at the top, or press F5 on your keyboard:

This will open up your game, where you can hit “Play” and move around the level using the arrow keys:

This is the base project that we'll build upon to create our own fully featured action-adventure game!

Your project will open in GameMaker, which is divided into two sections:

Currently, our level is empty besides some baddies hunting the hero down... Let's give him something to loot!

We're going to add coins to the game: you will be able to place coins in the level and pick them up as the player:

We'll create an object asset for the coin, which we can place in a level as many times as we want.

What did we just do?

We created a new object asset, and assigned a sprite asset to it, which is simply an image.

This way the coin sprite (spr_coin) will always appear on the coin object (obj_coin).

Our coin object is ready! You can now open the first room (rm_level_1) and start placing coins. 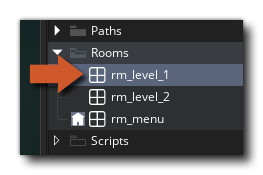 Doing so will open the Room Editor, which has many layers for you to place different kinds of assets.

First of all, make sure that the “Instances” layer is selected: 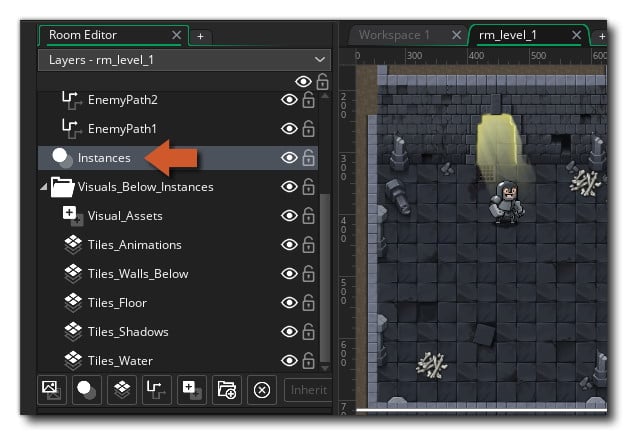 This layer is where you place objects.


Now you can drag the coin object from the Asset Browser into the room! You can also hold Alt and place coins simply by clicking and holding (make sure that obj_coin is selected). 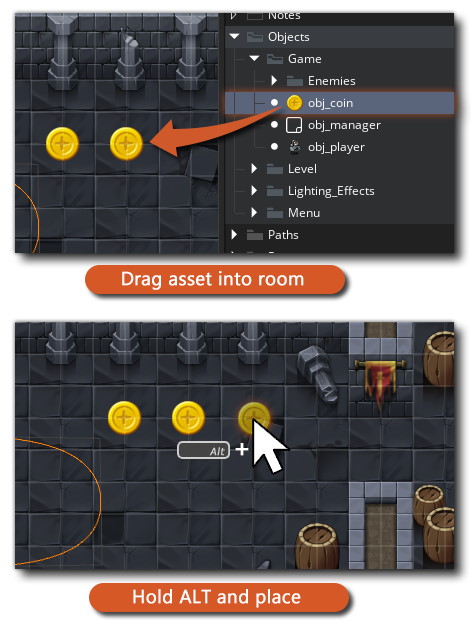 There is only one coin object.

But, we can place it many times into the room!

Each coin placed in the room is known as an "instance". From one object, you can create many instances.

Craft the hero's trail by placing coins and barrels in his path. 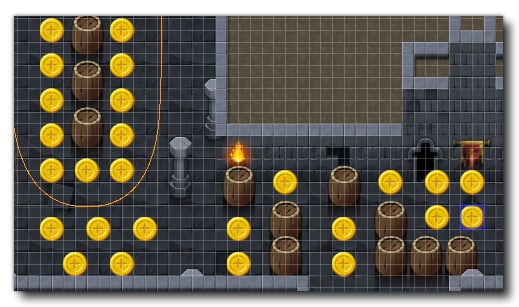 We want the player to collect a coin on touching it. To make this work, we’ll make use of Events and Actions.

But what are Events and Actions?!

Let's say you have a recipe for pancakes, with all the steps in a list...

In this case, your recipe is the event and these steps are the actions.

When you start following a recipe, you have to follow all steps inside it; only then the recipe is considered finished.

Similarly, when an event runs, all of the actions inside it are executed.

That is basically how you program an object in GameMaker -- you create a bunch of recipes with steps to control what your object does!

We’ll do the following to program our coins to be collectable:

When you have chosen your event, you will be asked to choose between GML Visual and GML Code: 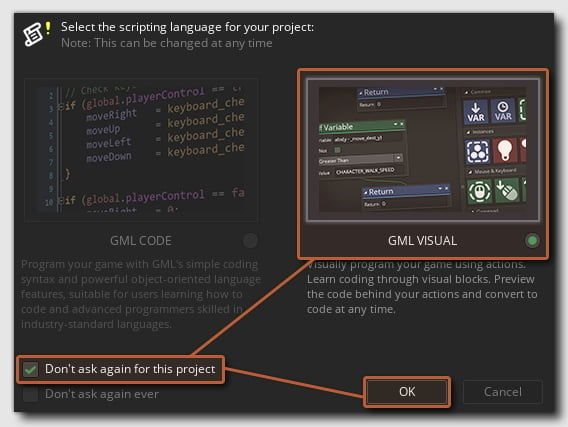 Select GML Visual, and make sure to enable "Don't ask again for this project". Hit "OK".

Doing this will add the event to your object and open it in a new window. This is where you can start creating your recipe, to tell GameMaker what should happen when the coin touches the player.

The new event window will mostly be empty, except for the panel on the right: the Toolbox. 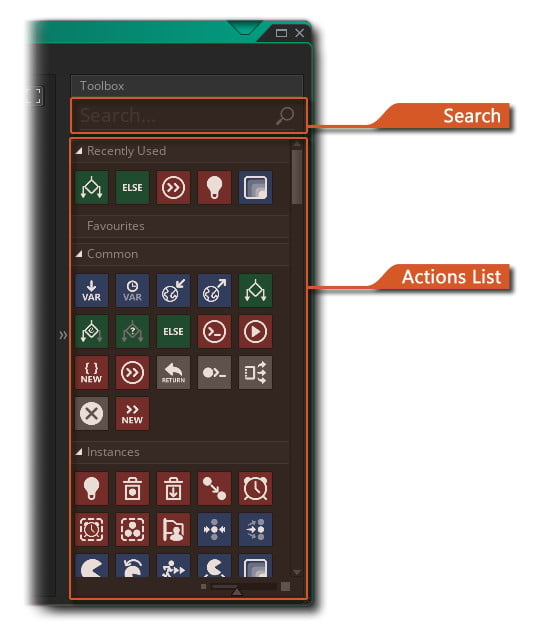 The Toolbox will be your most important tool for programming objects. It contains all the actions that you can use, and allows you to search through them using the “Search...” field at the top.

Going back to the pancake analogy, the Toolbox contains all the possible steps that your recipe can contain -- whisk, pour, heat, flip, etc. -- and they can be placed into your recipe in whatever order you like!

We are inside a collision event with the obj_player object. This means that the event will run when the coin touches a player, and all actions inside it will run too.

When that happens, we want the coin to be removed from the room. We’ll do the following to achieve that:

The first action will destroy the coin instance, removing it from the room. The second action will create a particle effect for some eye candy.

For the “Do Effect” action, use the same settings as shown in the following image:

Make sure to enable the "Relative" checkboxes for X and Y, as that makes sure that the effect appears at the coin's position.

You can select the “Do Effect” action and press F1, which will take you to its manual page. There you can read more information about its options in detail!

Run the game, and you will see that the player is now able to collect coins!

Change the effect that appears when you collect a coin, in obj_coin's collision event. 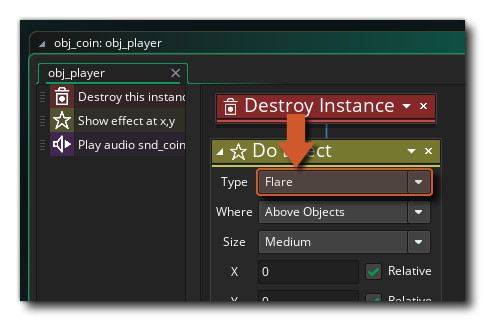 You can change the Size too!

GameMaker has many types of effects that you can use, some of which are shown below:

Although you can now collect coins, you will notice that the coin counter at the top does not change. This is because we are not actually changing the player’s coins variable. 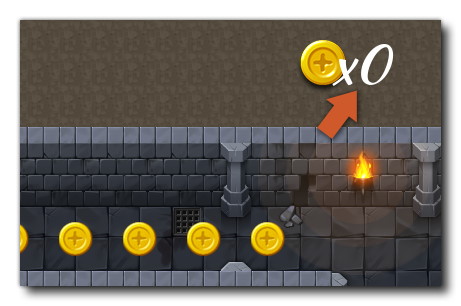 Let's go back to the pancake recipe.

At the top of the recipe page, let's say you have written:

Throughout the recipe you will now remember how many bananas you have to add, just by reading that text!

If you are feeling more hungry for bananas today because you watched a documentary on cute monkeys, you can increase that count...

…and you now have two more bananas in your recipe!

In this case, 'Bananas' is a variable.

It essentially stores a value and can be changed. We can easily create and modify variables like these in our code, so we know exactly how much we have of something!

Our player object already contains a variable called coins, which stores the amount of coins it has. We simply need to increase this value when a coin is collected.

Use the following settings for the “Assign Variable” action:

Here, we’re assigning 1 to the coins variable. However, this will not simply set the variable to 1, because we’ve enabled the “Relative” option. This means that the value of “coins” will increase by 1, hence adding one coin!

Run the game now, and you will notice that the coin counter actually goes up when you collect a coin!

Our game now has coins that can be placed anywhere and collected by the player to increase their score!

Currently the player can't attack at all, so we'll make it able to swing a sword so it can defeat any enemies in the way!

We'll create a new object that will show a sword slashing animation.

Whenever the player presses Space, this sword object will be displayed.

When an enemy touches this sword object, it will be defeated.

The project contains a sprite called spr_sword_attack. This is what will be displayed over the player when the Space key is pressed, creating an attack: 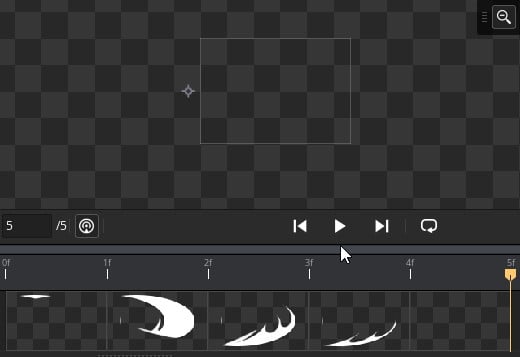 Let’s start by creating an object for this.

Refer to this section for instructions on creating objects.

Instances, by default, exist permanently in a room until they are manually destroyed. For example, if you place a coin in the first level, it will remain there until the player touches it.

This sword object will be created by the player, but we don’t want it to keep existing. We want it to destroy itself when its animation ends. This ensures that after pressing space once, the sword also appears only once.

We’ll do the following to implement this behaviour:

Our sword object is now ready: whenever it’s created by another object, it will only play once and then destroy itself.

Let’s now allow the player to swing this sword when they press Space. We’ll do the following to achieve this:

Use the following settings for both actions: 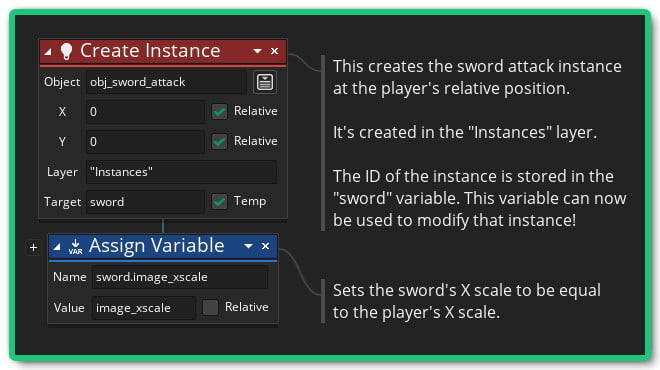 Each instance has an ID, which can be used to access it and modify its properties. In the “Create Instance” action, we have the “Target” option which holds the variable name that will store the ID. Since we’ve enabled “Temp”, this variable will be temporary.

The X scale of an instance controls its horizontal size, and it’s stored in the image_xscale variable. This variable is used by the player to flip its horizontal sprite, so that it looks left or right depending on the input:


This same scale will now also be applied to the sword, so it faces left or right depending on where the player is facing. To achieve this, we’re using the “Assign Variable” action to set sword.image_xscale equal to image_xscale.

Run the game and you will now be able to swing the sword horizontally!

Making the sword swing in all 4 directions is covered in another part as it's a longer process.

We’ll now let the player defeat enemies by hitting them with the sword. Let’s do the following:

Use the following settings for these actions: 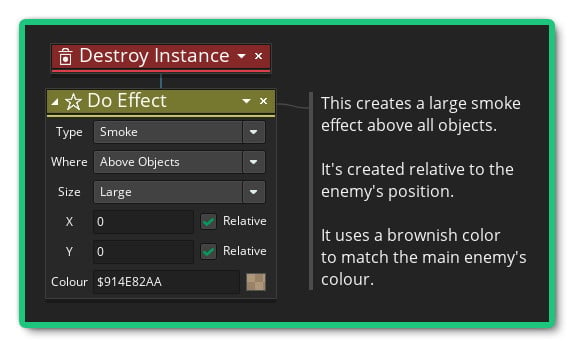 You can change the "Type" used in "Do Effect", to create a different type of effect when an enemy is defeated.

You can even place multiple Do Effect actions to create various effects at the same time! Go ahead, give it a go.

When an enemy comes in contact with the sword, it will now destroy itself and create a particle effect. Even though we have not added this event into obj_baddie, it will still apply to it because it’s a child of obj_enemy_parent: 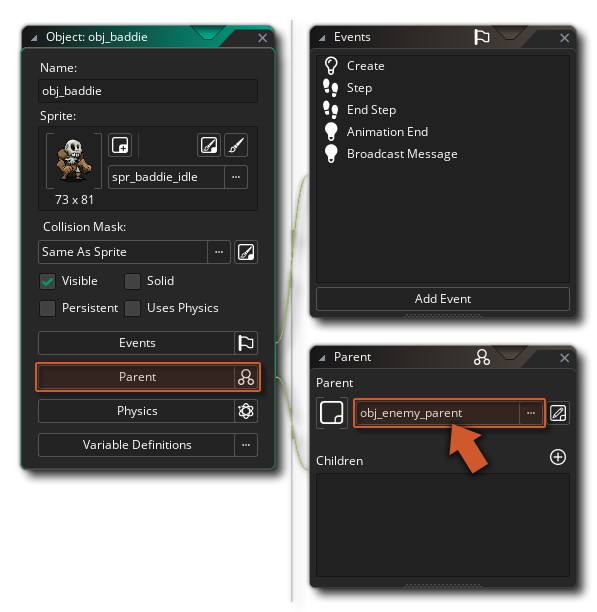 A child object does whatever its parent does.

Run the game and you will now be able to defeat enemies by swinging your sword! We've got some real power now!

GameMaker is based around objects, and to add new functionality to your game you simply make new objects and add/edit events!

For example: Create a second, rarer coin! Select obj_coin and hit CTRL+D to duplicate it (or do it through the right-click menu).

In its Create event, change its colour to red so it looks different! 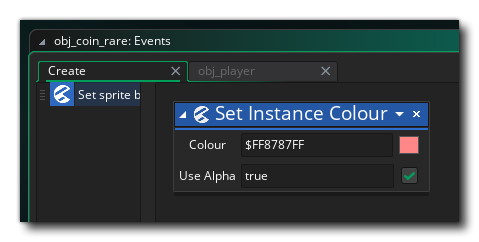 In obj_player, add a collision event with your new object, so when you touch the rare coin, you get 5 coins (or any other amount you like!):

Now place it in your level and reward your player for exploring! 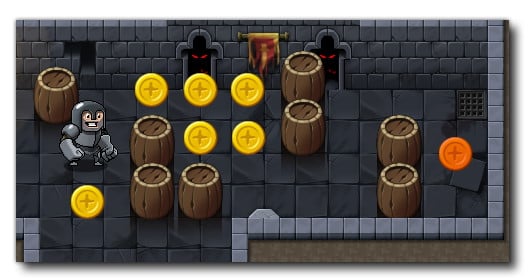 It will look red in the game only, not in the Room Editor, as it requires its Create event to be run for the colour to change.

You have now created your own action-adventure game and have customized it in your own way!

Now follow the next part, or continue reading the bonus part below to publish your game to GX.games so you can share your creation with your friends and family.

Publish your game to GX.games for free, and share your creation with your friends and family.

We created our own game from Hero's Trail, by adding a coins functionality and allowing the player to attack baddies. Here is a summary of what we've learned:

We’re not stopping here -- in the next part, we’ll understand GameMaker works, and then add interactive level design by making chests, gates and more!

<- Go back to index page