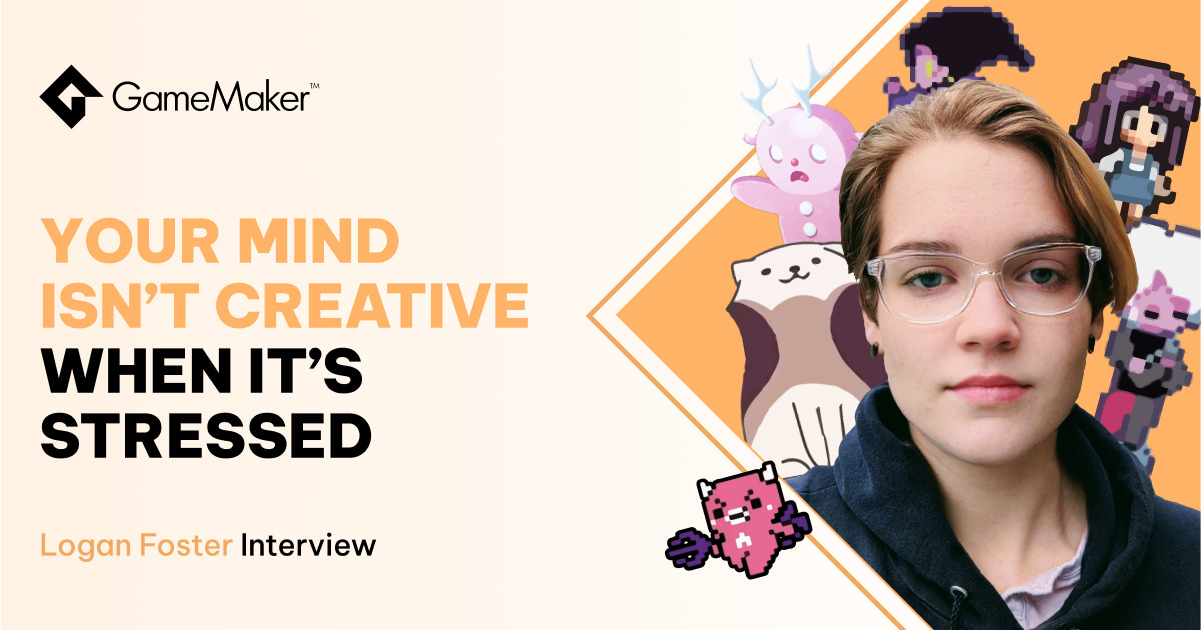 Logan Foster is an independent game developer, music and sound specialist, currently working on Seals of the Bygone.

In this interview, Logan tells us how she deals with creative burnout, how game jams helped her become a better developer, and all about her passion for competitive disc golf!

How long have you been making games for?

Since elementary school. I was in third grade when I started using GameMaker, and I just never stopped.

A week didn’t go by from then until now that I didn’t have the software open on my computer doing something.

Why did you decide to use GameMaker?

My mother was Googling things for me and my older sibling to do, and she found GameMaker.

She knew both of us liked video games, so she downloaded it, but intended for my older brother to use it. She didn’t think that I was old enough to make video games, but I was blown away by being able to make a digital world.

Every day after school I would come home and boot up the computer and just make things.

The beauty of it was that the drag and drop interface allowed a child to make something. If I didn’t have that, I would never have made video games, because I wouldn’t start learning GML until I was 16-ish. I made so many jam games in drag and drop, when I was participating in GM48s.

I never thought that I’d be able to learn programming - it seemed too hard. But transitioning from drag and drop to GML was so smooth, and I was able to get over that mental barrier.

I’m really thankful that somebody tried to create a visual programming language for non-coders, because I wouldn’t be where I am today without that. 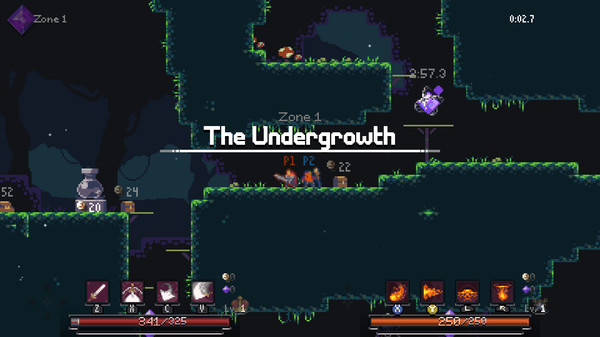 Are game jams an important part of your game development career?

Game jams are great for the ADHD brain because we're extremely good at hyper-focusing on a task and just losing ourselves in it for a long time, so that came very naturally to me.

I used to participate in them all the time and they were fundamental for me developing the skills to start and finish a game.

I think a lot of game developers struggle with finishing games. It’s probably the number one problem people run into when they’re learning and game jams teach you how to finish a game. If you’re participating in a game jam and you can never get your game done, then there’s a problem.

You need to focus on making a very small game and just finishing it. That’s the benefit of game jams. They teach you how to make a polished game and focus on what matters and not get stuck iterating feature creep.

I attribute my ability to finish things and not give up to the amount of game jams that I did when I was a teenager.

What are some of the games you made during game jams?

When I was 14, I made my first game jam game. It was called One, and it was, in hindsight, sort of ridiculous.

It was basically an atmospheric walking simulator. It was dark and mysterious, a metaphor for how I was feeling at the time, which wasn’t great, but I loved that game. It’s a great piece of work, and it’s one of the most genuine things I’ve ever made.

Oftentimes I think too much about mechanics and design, and what I should focus on are those childlike feelings and creating something that matters to me.

Table Tanks was number one in the HeartBeast Game Jam. I had one day to make the game, so I went to a coffee shop at 9:00 AM, sat there for, six hours straight, cranked out the entire game, went home, stayed up late, finished it, and then sent it, uploaded it, and it won first place. I thought it was a little ridiculous!

Another one is Quaterneo, which came second in the Amaze Me Game Jam. Originally it had different mechanics, but I built the design document and it turned out to be a really interesting game.

Sometimes with puzzle games you get lucky and they almost design themselves. It’s almost like the game itself teaches you how to design it. I thought it’d be funny to do a Tetris game where you don’t control the pieces falling. 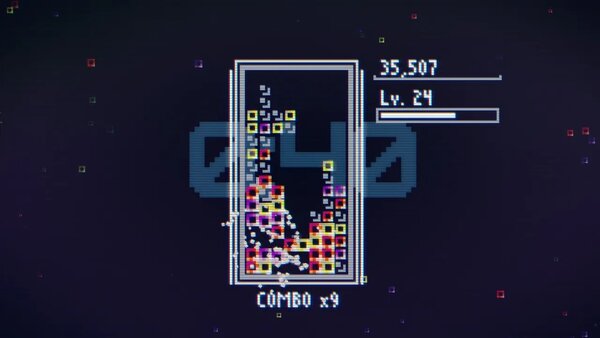 Do you have any plans for future games?

My focus right now is to get Seals of the Bygone out of Early Access and completely finished. So, that’s my near future, finishing that product and then evaluating: ‘what’s the feedback for this? How do people like it?’

If things are going well, I’d love to put it on consoles or phones.

What is your favourite part of game development?

I absolutely love creating! My favourite part is imagining what the world in game feels like, breaking that down into its component pieces, putting them in the game and having the sum of those parts be greater than the whole.

It feels amazing when you elegantly line up your audio-visual gameplay, everything just aligns nicely and you create this cool scene.

Is there any part that you struggle with?

The sales, marketing, and business side of it. It’s something I’m not passionate about, and I have no training in. Learning is what motivates me, but I have no interest in mastering business. I neglect it, and it’s difficult to manage later on.

You need to be posting on social media, advertising, talking to people, but I’m an artist, and I don’t care about that. The burnout was really challenging for a long time. 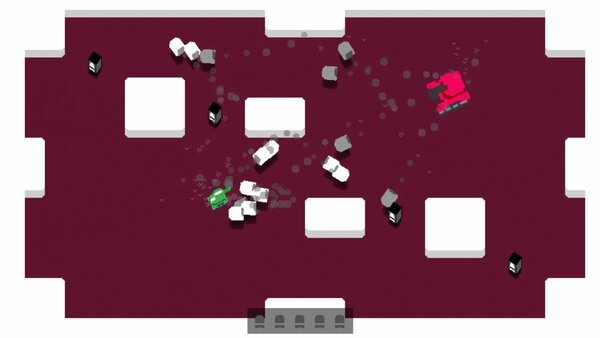 How do you deal with burnout?

I’ve gone through many phases of struggling with it, trying to find ways to optimise how to do my work in a way that nurtures that creative mind, because your mind is not creative and brilliant and fun when it’s stressed.

It feels like if you keep working you’ll make something great, but what I’ve learned is that it doesn’t happen that way. It’s all about giving yourself rest, time, and acceptance. If you’re struggling with working on a game, then let yourself just get up and find something that you like. Make some tea, just relax, talk to people.

I ended up working in coffee shops a lot, because it was just a more social environment. I wouldn’t sit and stare at my screen for as long as I would at home. I started talking to people, ended up making friends and had a healthier relationship with my game overall.

One of the things that helped me the most was my ADHD diagnosis. It changed my life because it allowed me to understand how my brain works and why it was so hard for me to do some things that were so easy for other people.

That understanding turned the volume down on my inner critical monologue. I reached some level of acceptance without feeling like I needed to be doing game development 24/7.

I also play disc golf. One of the issues and challenges of being a game developer is you spend so much time inside, sitting in this sort of rigid position oftentimes, focused on what you’re doing and ignoring your body’s needs. Over time, you get stiff, you get sore, you get aches, and it affects you mentally.

Going outside and exercising has, for me, been the greatest remedy to feeling more alive and human after spending hours staring at a computer screen. 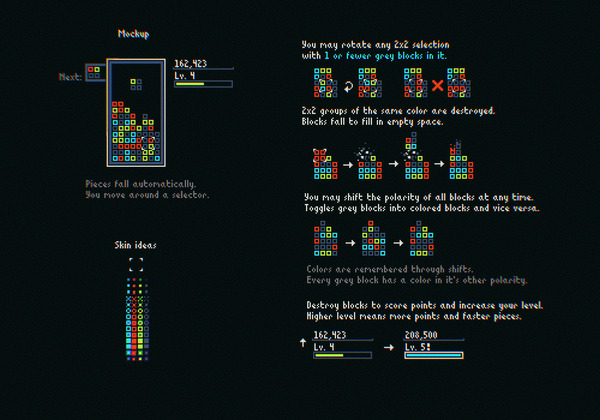 What is disc golf exactly?

It’s a form of golf where you throw frisbees, which is pretty popular in Sweden. The US has the biggest disc golf population. Sweden’s number two, and they manufacture a lot of the equipment for it.

The idea is to throw your disc in the ‘hole’ in the least amount of throws, or strokes, as you would call it in golf.

The PDGA, which is the Professional Disc Golf Association, uses an algorithm to score your rounds and tournaments based on how everyone else is doing, and then they score you with a rating. You get a player rating, similar to chess player ratings.

The highest rated round I’ve ever shot was about 970. The highest you can shoot is around 1100.