CSD: Difficult Games, For Everyone 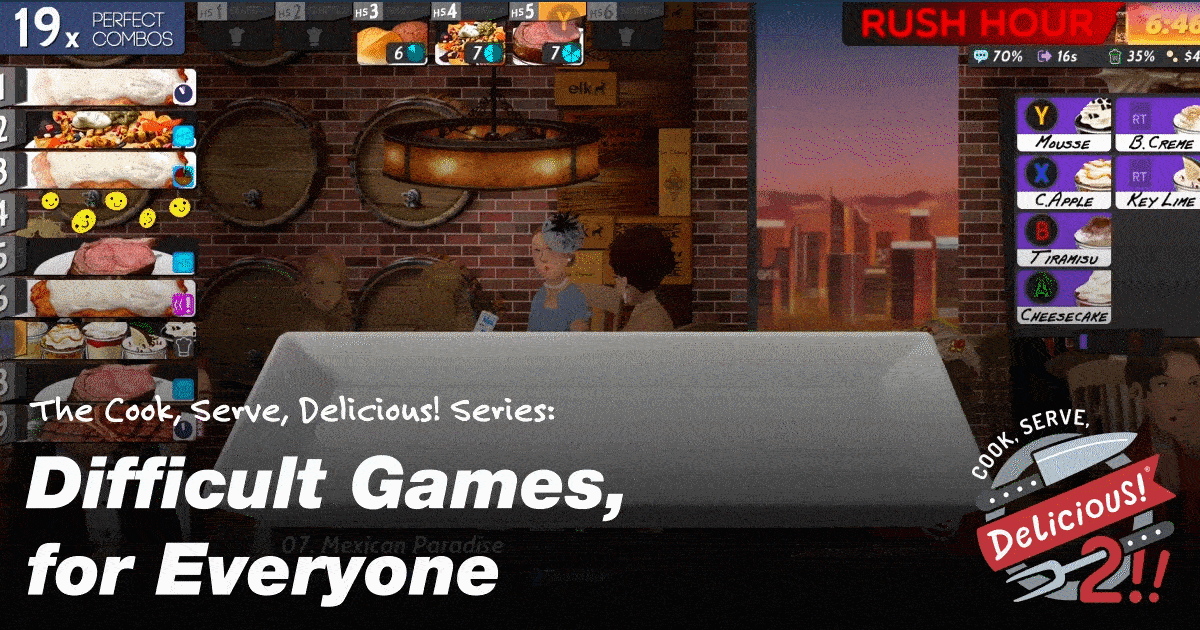 Maker of indie games such as Cook, Serve, Delicious! 2!! and the Oil Blue, through his company Vertigo Gaming Inc., David Galindo joins us on the blog to talk about the topic of difficulty in games and how the CSD series strives to make difficult games for everyone!

A key component of Cook, Serve, Delicious! and Cook, Serve, Delicious! 2!! is the difficulty. The big hook I had for the first game, where you had to cook and serve orders to customers for the duration of a day as you built up your restaurant from zero to five stars, was that it was not quite as easy as it seemed. I leaned into that difficulty in the descriptions and marketing, calling it the first “hardcore cooking simulator” and even adding an “extreme difficulty” in updates to the first game.

What helped is that the look of the game was inviting to casual players, with a simple interface and easy instructions, but when the rush hour hit (two moments during the day where customers come non-stop) it was frantic and difficult. There were complaints by some of it being too difficult, but the number of people responding to that criticism with “get better” and similar comments made me feel like I was right to push that difficulty as much as I did. The “Dark Souls” of cooking, as many put it. 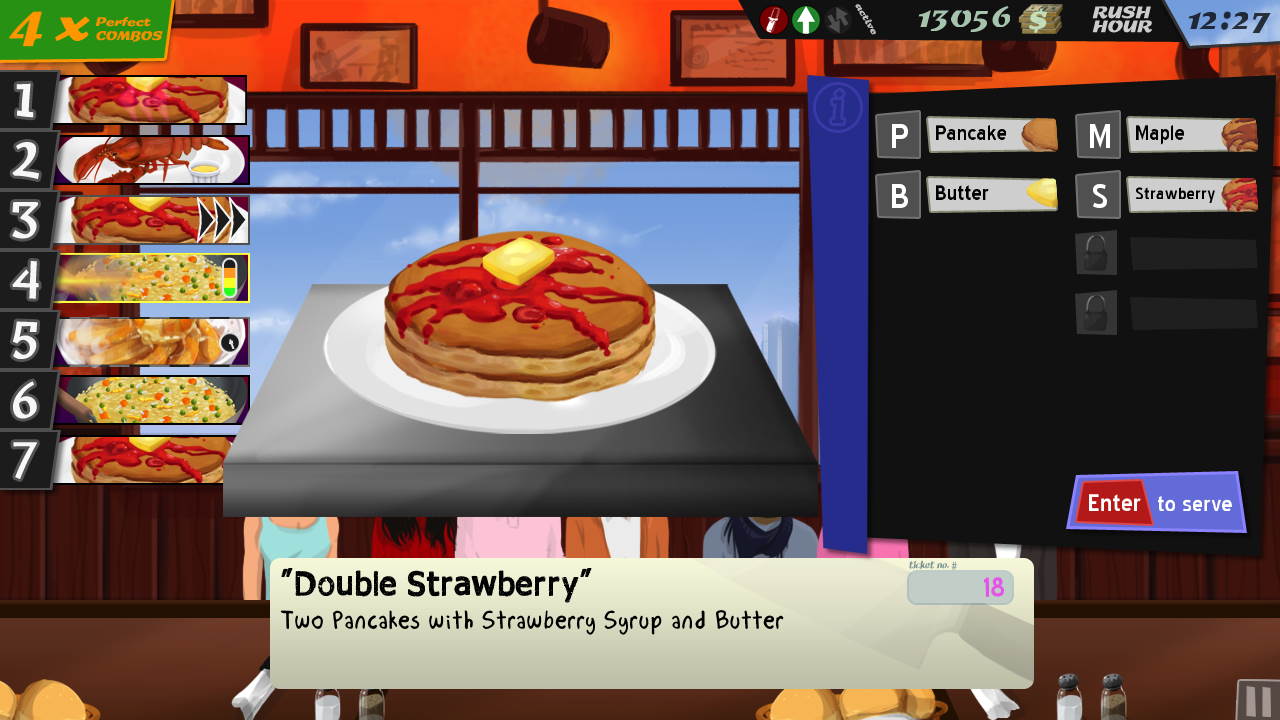 The sequel went even more complex, adding new gameplay elements while dramatically increasing the number of orders people can take at a time. It added a new bronze/silver/gold element to each level, demanding a perfect day for the top gold medal. For fans of the first game, it was a welcome ramp up to the challenge. For others who were just getting into the game for the first time, it was daunting and the difficulty curve was somewhat extreme. Yes, my game was extremely challenging, and I was not going to make any apologies for it. I was proud of making a hard game and fans were loving the satisfaction of perfect days and gold medals. I even made some Dark Souls-esque promotional art. 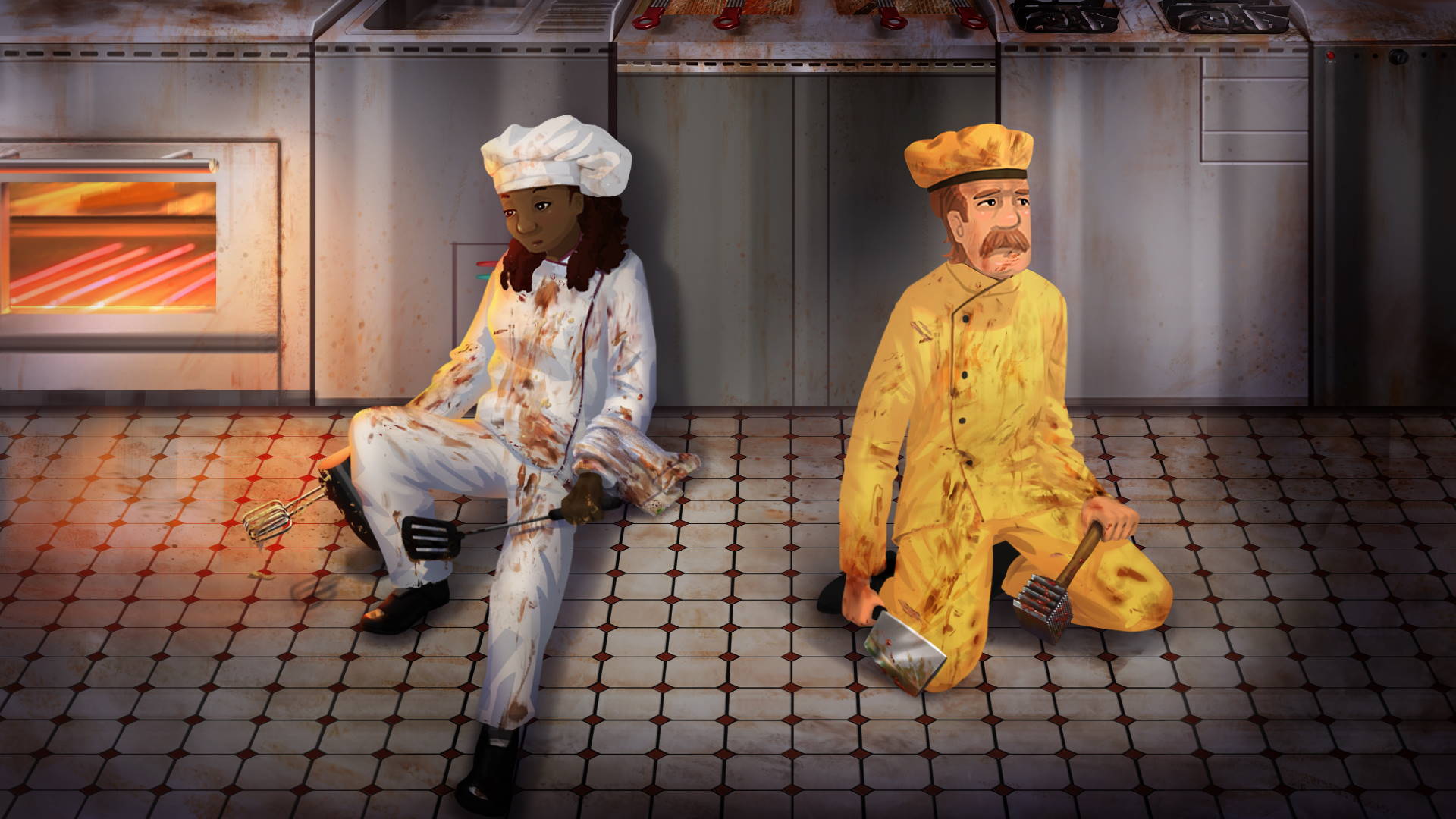 The initial launch of CSD 2 was rocky, as it landed with many features not ready or missing altogether. It was rough, to say the least, and once I patched the game in a more stable condition, I wanted to get my Steam score average up from the 80% it was currently at. So, I turned to the community to get their feedback, implementing several features and improvements that I myself didn’t really consider or even wanted in the game at all- it was less about what I wanted, and more about what would drive the review average higher. One of those requests was for an easier mode, almost like a free-form mode where a lot of the game elements were removed, such as customers leaving because you didn’t get to their order in time, removing rush hours, and so on.

There are two modes of play in CSD 2: one is where you work as a chef in a restaurant, which was the main campaign with over 300 levels and allowed for bronze/silver/gold in each level. The other mode was the “CSD Restaurant” where you planned your own menu and played a day meeting certain milestone requirements, but was mainly a sandbox to try out new foods. In this mode, I added a Zen feature, along with a Stress option that threw the difficulty up to an almost impossible degree (perhaps because subconsciously I was a bit miffed at adding an easier mode in the first place). When I announced that the Zen feature was in, people got excited, only to be disappointed that it was only for one component of the game. Still trying to find ways to implement new features for better reviews, I implemented Zen Mode into all 300+ levels. 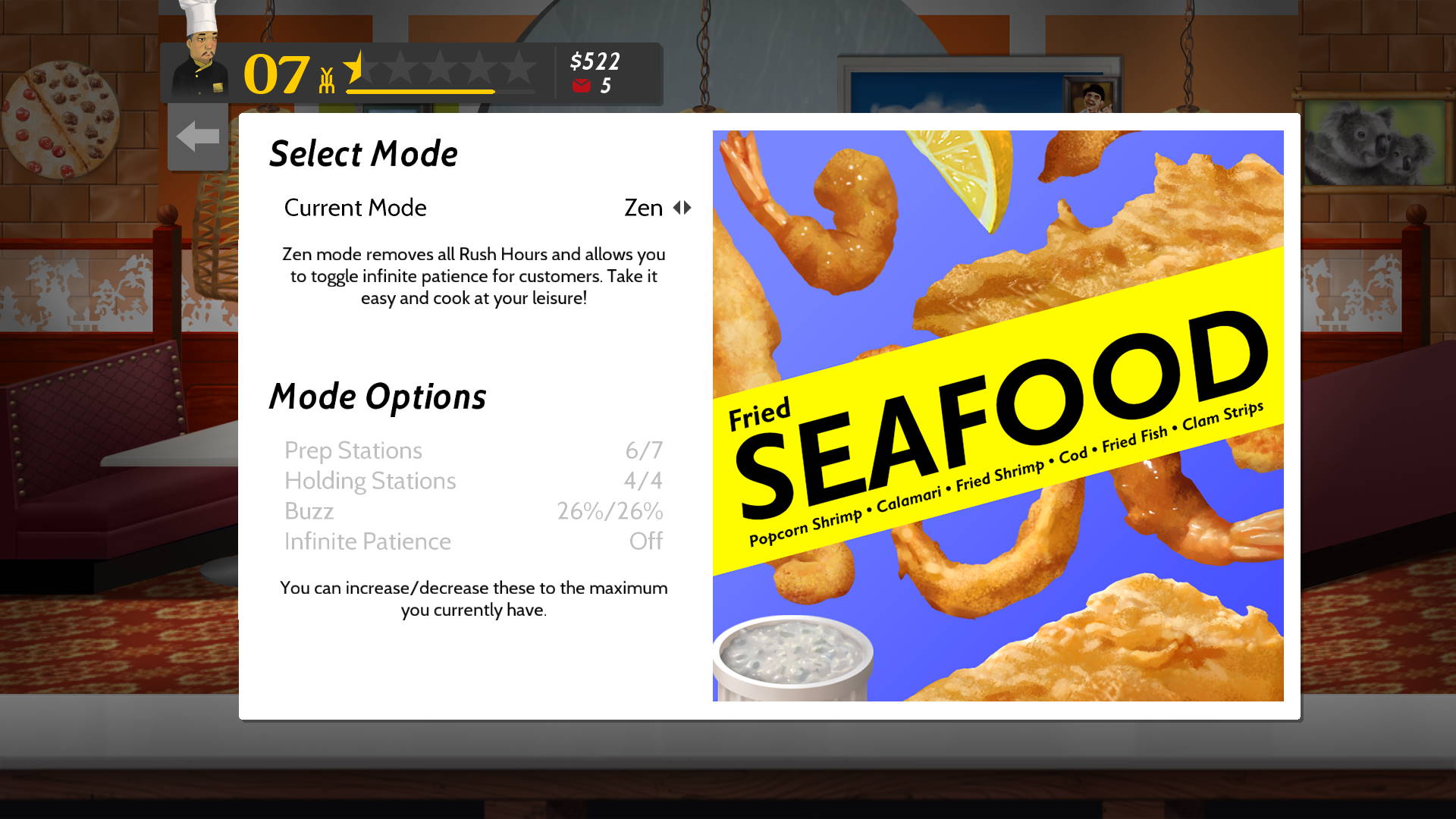 What happened next completely surprised me. I was getting thank you emails and reviews from gamers with disabilities and those who couldn’t keep up with the action for adding a way for them to enjoy the game. As ridiculous as this might sound today, I had no idea that by making the game set for a specific audience I was excluding an entire group of people who, by no fault of their own, couldn’t enjoy my game. It opened my eyes in a big way, and I set out to add even more options to help others similarly affected with other elements in the game.

While I added colorblind features at launch (in CSD2 you can change the highlight colors for two-player sessions) I didn’t have much else simply because I was unaware of the needs of some gamers. One request was to tone down the strobe effect of lights in the game (orders would rapidly flashlights indicating an order was done). Another asked if I could hide the insect and rodent images for some of the chores in the game, due to certain phobias. A large font was added to help the visibility of some of the smaller fonts in the game. Distracting UI elements that would flash across the screen when rush hours would start and stop was another toggle added to the game. All of this was added in subsequent patches, and nothing was ever too extreme to at least consider as an addition in a future patch.

But just how much were these new features utilized? Thanks to the stat-tracking system built into the game after launch, I have some actual data! 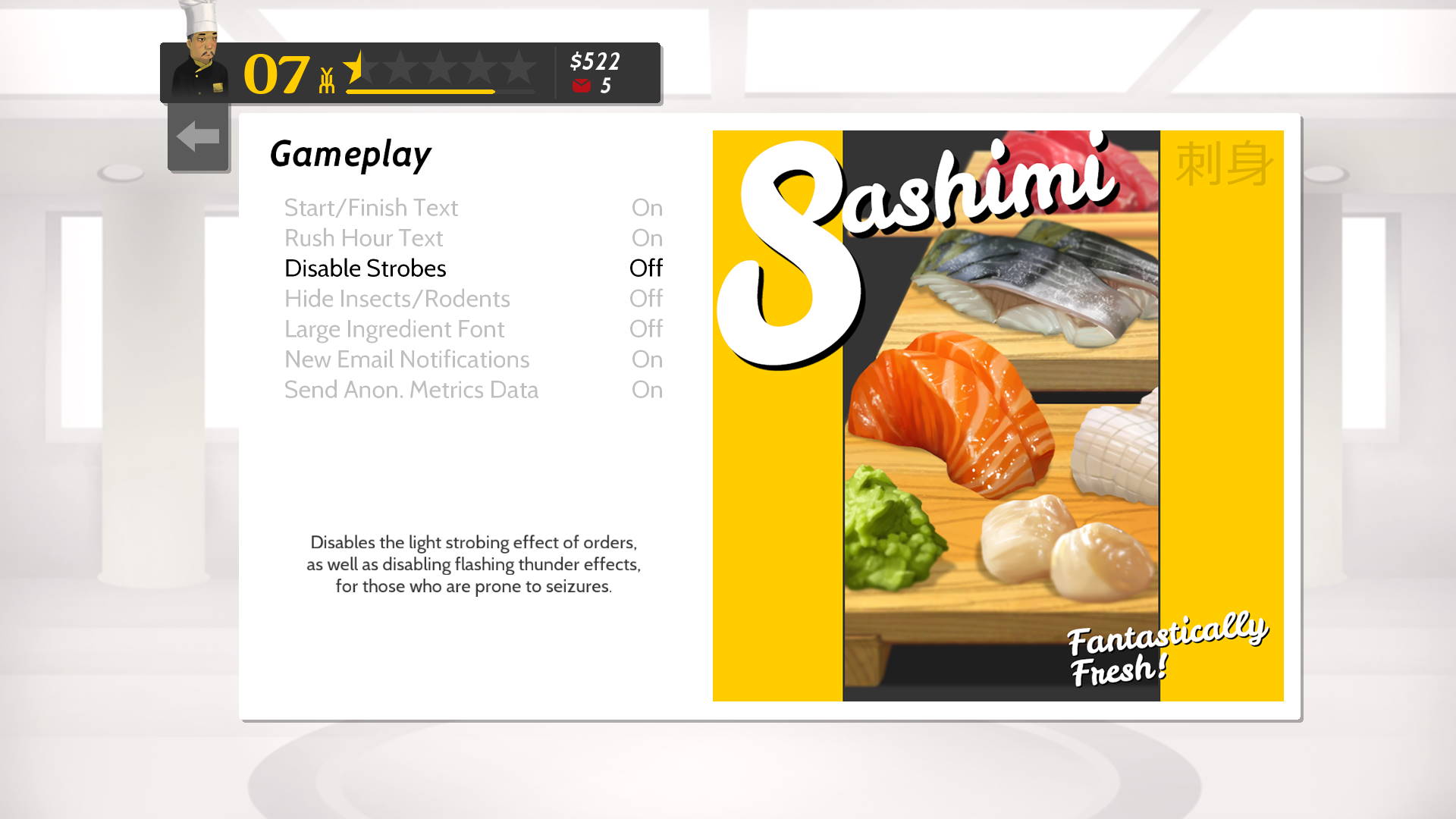 Of the players playing the main campaign, 14% chose the Zen Shift option over the Standard Shift. This is a large number of players that I’m sure are not only looking for accessibility but also like the change of pace and “chill” vibes that Zen mode brings over Standard. The options toggle had some lower numbers, and due to the late implementation of the stat-tracking, it’s harder to measure and much less accurate (since most people mess with the options once or twice before never accessing them again). I can say that hundreds of people have toggled those accessibility options, and while that’s in the lower single digit percentages of total players, that’s still hundreds of people that enjoyed the game to a better degree. Looking at it from a business perspective, it only takes a fraction of those to leave good reviews and raise the Steam review average, which CSD 2 is sitting at 88%, now, with over a thousand reviews.

I realized something: my game was still the hardcore cooking sim I billed it to be - the difficult, agonizing, challenging, extreme game that was impossible at times and even harder than that in others - and it was also an extremely chill, relaxing game that catered to those who didn’t necessarily want all that but still wanted to play the game. Nothing was compromised and everything was gained. It is sad that it took me a botched launch to finally start listening more to the community, but I’m thankful for it, and all of my future games will have accessibility options as a result.

Games are for everyone, and I can still make challenging, difficult games without having to exclude someone from enjoying it too. I hope you can do the same in your games because know that there are plenty of players out there who would benefit from it! 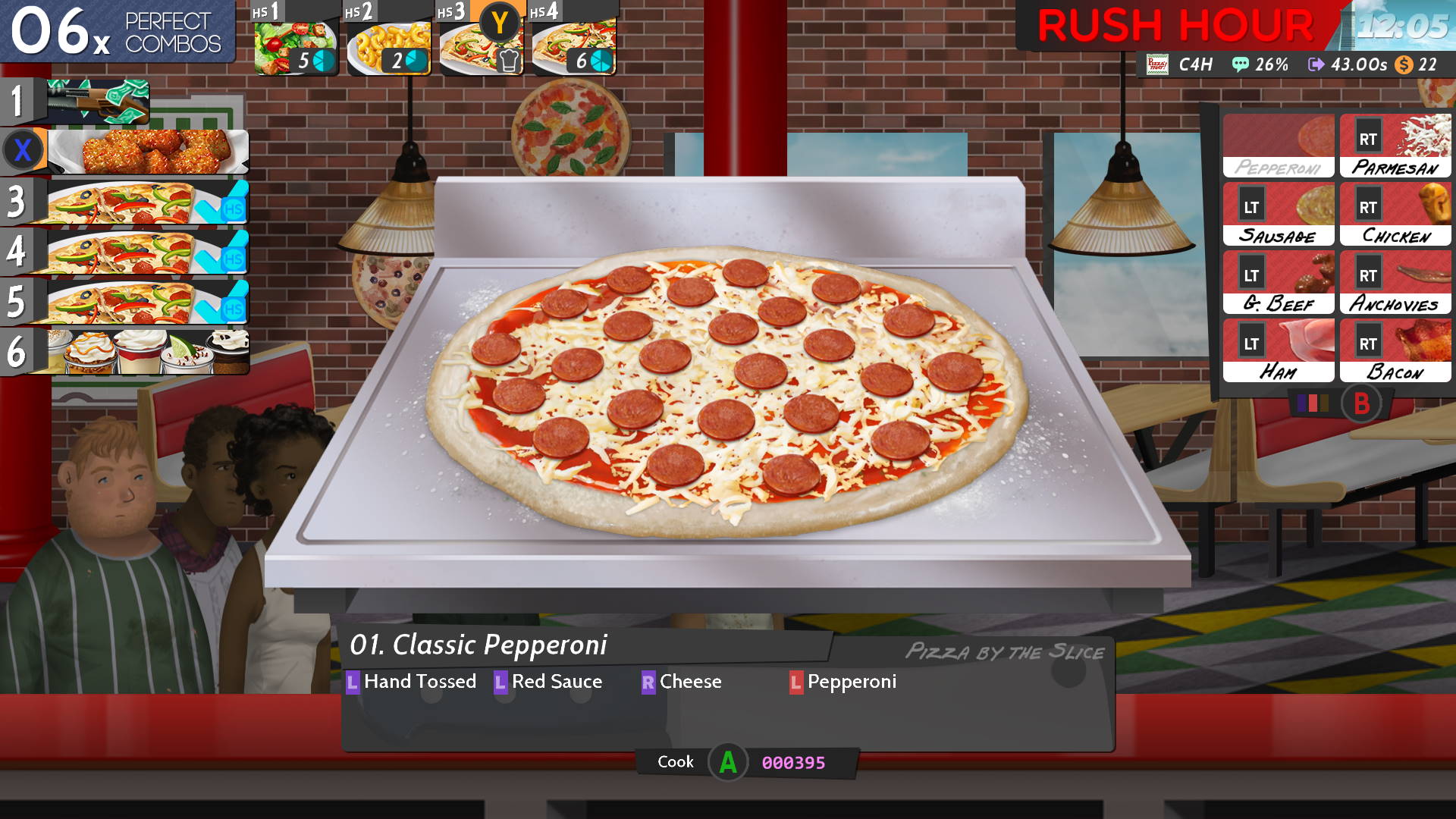